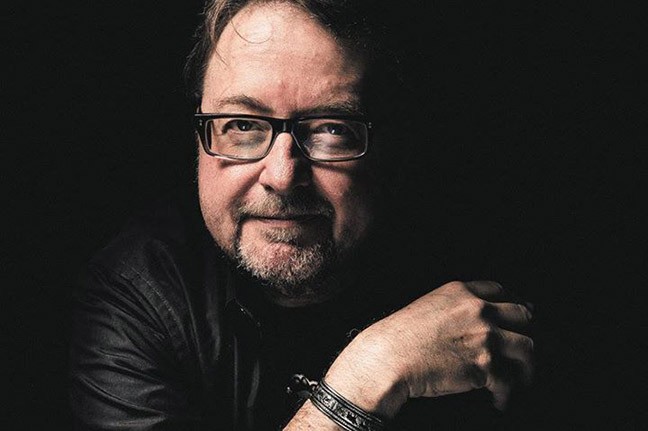 Courtesy
Luis Alberto Urrea says the border situation is “just so idiotic, toxic and racist. The new wall of razor wire in Nogales, for example.”

Luis Alberto Urrea moved to Tucson in 1994 at the summoning of Chuck Bowden, the revered border journalist who haunted the meridian between cartel and datura bloom.

Urrea stayed in the Elysian Grove, hardly sleeping while spirits swirled like black confetti. He ate white rice, a single bowl a day, and wrote for the Tucson Weekly. He wrote poems, he prayed, he struggled.

Bowden has since joined the cemetery inside Urrea's notebook beside Edward Abbey, Jim Harrison, and all the falling leaves from Urrea's family tree. But Urrea wrote through it all.

He built a pyramid, book by book, to world fame. Over 17 books, he explored the atrocities of the border and its joys. He wrote journalism. He wrote poems. He wrote fiction. Book after book he celebrated the spirituality and beauty of Mexican and Indigenous communities. And throughout his rise he ardently fought for the rights of immigrants and castaways everywhere. Though Tijuana is his physical birthplace, Tucson has been the place of his spiritual transformation and where his Spirit delivered some of its strongest messages.

In Tucson, Urrea began the best-selling novel The Hummingbird's Daughter.

In Tucson, The Devil's Highway, his nonfiction book, was banned from schools with the removal of the Mexican-American Studies from Tucson Unified School District.

Though he has since left for snowy Illinois vistas, Urrea comes back every year for the Tucson Festival of Books. His panels this year will span topics from writing female characters of color to disguising truth as fiction, to an author meet-and-greet. We talked about the sacredness of writing, the border and his activism. Our conversation has been edited for brevity and clarity.

Tell me what it was like to have your book removed from schools.

I found out about that at the book festival, by the way. There was a TV crew from one of your stations, and they lit me up and stuck a mic in my face and said, "How do you feel about Tom Horne banning your book?" I said, "Tom Horne, what did I do to Tom Horne?" She said, The Devil's Highway. And I said, "What? That's not true." And she said, "Yes, they say that it is anti-American and essentially has a satanic title." I was on camera, flummoxed, trying to get to my event, and I said: "Well, first of all, you know, they're teaching it at the Border Patrol Academy. So if it's American enough for Border Patrol agents to read, I think it's all right." And then as far as it being called The Devil's Highway, it's on the map. Are you going to go through the maps of the American West and remove the word devil from everything? Because nothing will have a name. I didn't take it seriously. Then the next year was when the Mexican-American Studies shutdown happened.

A friend of mine, Q of El Tambó and Ojala Systems, said he remembered watching all the books being boxed up. He said everyone was talking about getting all these books back, getting the program back, but no one stopped to check on what happened to the youth who had to watch all this be taken away. What would you say to that generation?

I don't know about words in a situation like that, but I do know about actions. We've done endless things, like fundraising. I actually published a book, a small edition with a friend of mine, and did signed copies and gave all the money to Mexican American Studies. And when I come across somebody, I try to mentor them. I always tell them this thing that's happened and that's happening still, it will continue to happen for a little while. And partially because this is your century. You, just by being here, are going to win this competition. You are sacred.

With Scott Warren facing 20 years for conspiracy related to his border activism, do you have any comments on the current situation?

It's just so idiotic, toxic and racist. The new wall of razor wire at Nogales, for example. I've been doing some stuff with a wonderful classical musician in San Diego. One of the things he did, which I wish I'd seen, was he set up a concerto on the border fence. He said: "You know what was really weird. I was on the U.S. side, and it was all barren. Watch towers, helicopters, trucks, dogs, men with guns. We went around to the Tijuana side, so I could talk to the musicians over there." And he said it was painted. There were murals. There were art installations. There was partying. There were couples strolling along. There were paleteros selling ice cream. There were even musicians that weren't in the orchestra and he said: "It hit me then. I was in Berlin during the Soviet era." And he said, "You know, the side of a wall that is austere and covered in barbed wire with weapons is the side with the people in prison and the side that has murals and ice cream and lovers and David Bowie is the liberated side." And he said, "I suddenly realized that the wall, the border fence is a prison for us." And I knew as soon as he said it, it was true. It's to keep us trapped.

Luis Alberto Urrea appears four times at the Tucson Festival of Books, on March 2 and 3, on the University of Arizona campus. Go to tucsonfestivalofbooks.org for more info.