Finding new freedom in One Drop of Truth 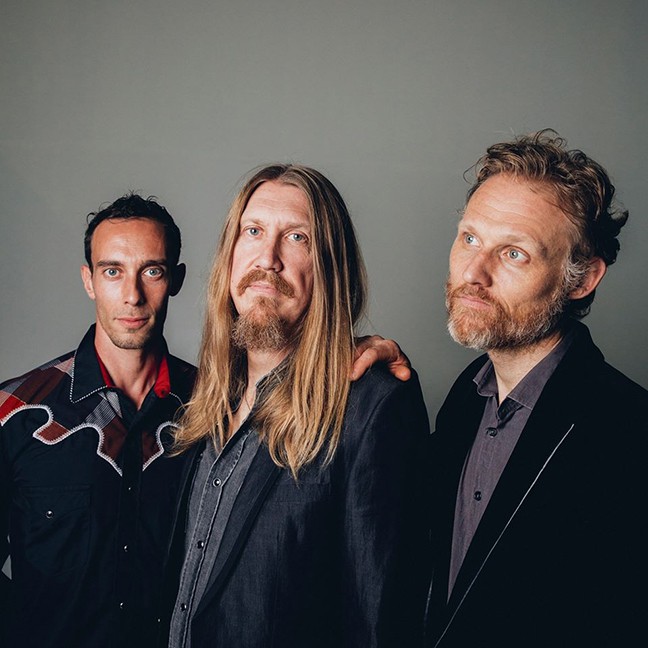 It's been almost a year since Americana/folk trio The Wood Brothers released One Drop of Truth, their sixth studio album. The band—actual brothers Chris and Oliver Wood plus Jano Rix—had a three-year gap following 2015's Paradise, while they explored new approaches to recording. According to Oliver, the methods have worked as it's been their most well received album yet.

"I think partly that's due to us having been around for a few years now, maybe growing a fanbase and growing a little awareness," Wood says. "On the other hand, I really do feel like it's some of our best work. It's something we've learned how to do over the years and we've gotten better at as well."

The three men have been making music together since forming in 2004, and individually for years before that. As a result, they've come to understand not just the technical but also the psychological aspects of making records.

"The part that can be tricky is self producing," Wood says. "Often times, you hire a producer to be a neutral, outside set of ears. When you self produce a record, you don't have that. On this record, I think we learned how to do that and to come up with a process which would allow us to get away with that. We made this record in a very different way than we had the previous records. I think that's why it worked. It's why we enjoyed it so much and were able to reach the creative goals that we had."

Intriguing, huh? That new process to which Wood refers has, he says, more to do with the psychological than the technical. Put simply, it's all about writing and recording songs one at a time, in different studios with different engineers, rather than going in with 12 songs written and blasting them all out.

"We would write a song or two, go into the studio and record it and then get back to it a few weeks later," Wood says. "That's a huge luxury because sometimes we could say, 'Let's start over on that one.' Rather than making rash decisions. That was fun for us to do. It took away a lot of the pressure. No one was looking over our shoulders—we have our own record label, we funded the album ourselves. We did it at our own pace and in our own style. It was really fun, and it allowed us to experiment. I think we're very happy with the results after that style of recording."

Each song was treated like its own movie in an attempt to avoid a uniform, homogenous sound.

"We went to different studios and had different engineers recording and mixing each song to some extent," Wood says. "So that approach is sort of the opposite of homogeneous. Each song can have its own character and that's alright—it doesn't have to all connect. The connecting factor ends up being the fact that it's us, but otherwise, there's some variety in the sonic pallet."

Despite only 12 months passing since the release of the album, Wood says that he and the band have already started working on the next one. After the experience of recording One Drop of Truth, the guitarist says that they felt freed up about the methods.

"It was very liberating to do that and to realize you can do that and get away with it," he says. "We weren't sure about it and our management wasn't sure about it. As it turns out, it was a great result. We got some great reviews, and were even nominated for a Grammy. Not that that's everything, but it did give us confidence and stuff. Anyway, we're planning to use the same process when making the next record. Plenty of experimentation."

While Wood isn't particularly keen on the term "Americana," claiming that he doesn't really know what it means, he does believe that this is a healthy time for music.

"I do think it's a cool time in that people are blurring the boundaries between those genres and styles, and showing that those are just words and it doesn't really matter—it's just music," he says. "Everybody is finding their own recipe, with a lot of the same ingredients. New recipes are happening all the time and it's kinda cool. It's also an exciting time because people are able to be more independent. Not only creatively, but the way technology is now people are making albums on their phones. But also, from a business and marketing standpoint. People are able to find ways to creatively do that online, and I like that."

The Wood Brothers play the Rialto Theatre on Monday, Feb. 25, and Wood is excited. They've played in Phoenix a couple of times, but the guitarist believes this may be their Tucson debut.

"It's only three or four years that we started playing in Phoenix," he says. "I have played in Tucson a long time ago, in a previous lifetime, and I have very fond memories of it. I feel like it is our debut and I'm very excited. But it's a town that I love."

The set, he says, will understandably be a mix of old and new, though there will be some fun reinventions of old standards.

"We like to play a few songs from all the previous albums," Wood says. "We like to pride ourselves on reworking a lot of material and that keeps it interesting for us—to take some of the old material and change it up and give it a facelift. That's kind of fun for us, so we'll do some of that as well as some fun covers."

And when they depart our town? More touring, and more recording. On their own terms, of course.

"The tour is never really over," Wood says. "It always comes back to haunt us every few weeks. But we're certainly excited about making more music and creating more music. We actually have built and started using our own studio. So when we're not on the road, we were excited to have a clubhouse and our own space to get creative with our own stuff in it. That's gonna be our hobby all year."