Changing lives one bike at a time

Remember being a six-year-old kid, flying up and down the street on your pink Huffy or electric blue Schwinn? The wind smacking your face, as you raced your friends from the mailbox to the corner and back? Those were the days. The best days, when you could just be a kid.

Sadly, many of Tucson's kids have never had the luxury of kid-hood due to the demands and constraints of living with a disability. It's time consuming, isolating, and expensive.

Children's Clinics, located at 2600 N. Wyatt, is ensuring that kids they serve (and children in the community with complex health needs) get the opportunity to just be a kid. They have started an Adaptive Recreation Fund, and through this fund, they are gearing up to give away 90 adaptive tricycles, 60 of which go out in October. However, they are not doing it alone. United Healthcare, Square and Compass, Borderlands Brewery, ContigoAZ, Ambucs/Amtryke and various private donors have donated time, space, money and energy to help make kid-hood a reality for children with special needs. The adaptive tricycles range in price from $500 to $2000, depending on the amount of adaptation needed, so not to quote the Donald but this is huge, Tucson. Huge.

According to Mimi Coomler, CEO of Children's Clinics, they serve approximately 26,000 families every year. Families come from as far south as Nogales, Ariz. to see any number of the 65 doctors and specialists/subspecialists that work there. They come for dental care, audiology, physical therapy, nutrition counseling, neurology, cleft lip and palate (Children's Clinics is the only certified cleft lip/cleft palate clinic in the entire state) and they come to them with hope. Hope that maybe that day is the day the doctor says, "Your child doesn't need surgery. We can fix this with therapy." Hope that maybe that day is the day they find out their child finally gained that one pound they've been trying to gain for the last three years. Hope that maybe somehow, someway, the therapists and doctors and nurses and social workers who make up their "team" can help them give their child that which most other children take for granted: a sense of normalcy. Mimi Coomler understood that hope, as did her colleagues Stephanie Bowers and Joseph Luevano, and that is precisely why they started the Adaptive Recreation Fund.

"Almost every family has had experiences with bikes," says Stephanie Bowers, Rehabilitation Supervisor. "Parents can remember what it was like to ride bikes with their friends. They are motivated for their child to have the same experiences they had. Also, siblings get super excited about being able to ride a bike with their brother or sister. It's something they can do together, that they weren't able to do before."

This is also their "in" to being a lifelong athlete, and building lifelong relationships. Joseph Luevano, Orthopedic Technician, and part of the driving force behind the Adaptive Recreation Fund remembers fondly the friendships and life lessons he learned through sports.

"My whole life was shaped by sports and recreation. I grew up in a small town where I was always on my bike, always in sports. I look back at all of my relationships, and all of my friends are from sports, and they are the best relationships. Friendships that have lasted over 20 years." Luevano says that the end goal is not only normalcy, but the opportunity for the kids to participate in sports for the rest of their lives. To be included in life, and not be a bystander. "With the right adaptations on a tricycle," he says, "it almost levels the playing field. Kids can be outside with their friends in the neighborhood and their siblings. They're able to participate, and inclusion becomes the norm."

Riding bikes is not just about becoming an athlete, though. While there is a physical gain, in that children who may not have the upper-body strength to support themselves walking, can sit and build their leg strength (and balance) by riding, almost more importantly is the mental and emotional fortitude that is built. Being able to participate in daily life activities with friends and family is an enormous boost to the self-esteem and personal confidence for a child with special needs. Mental health plays just as important a role in the daily living of kid-hood as does physical health. Children's Clinics is seeing to that. And they're not just stopping with bikes. Bikes are simply the catalyst for the bigger picture: inclusive playgrounds.

As it currently stands, the city of Tucson has three playgrounds that are considered "wheelchair accessible," and offer a full-play experience to a child with special needs. Milagros Playground at Jacobs Park (3300 N. Fairview Ave.), the playground at Jefferson Park Elementary School (1701 E. Seneca St), and the Rillito Center (266 E. Pastime Road). Children's Clinics hopes to be able to change that in the future, whether the playground is at their location, or in the community. But for now, they're starting with one kid and one bike at a time. 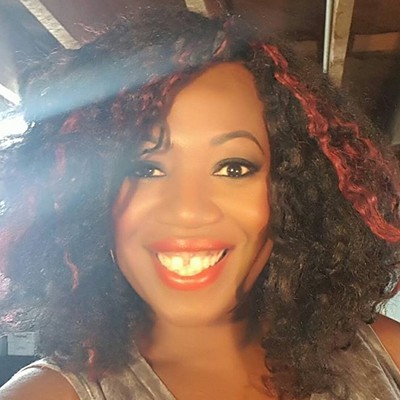 Adiba Nelson is a local word addict, advocating for disability rights and body love/size acceptance. If she looks familiar, you may have seen more of her on stage as a local burlesquer. She is also the author of the children's book Meet ClaraBelle Blue, and is currently working on creating the series to follow...
More