Turn On, Tune In…

Downtown Radio’s Psych-Out Festival promise to be a trip, man. 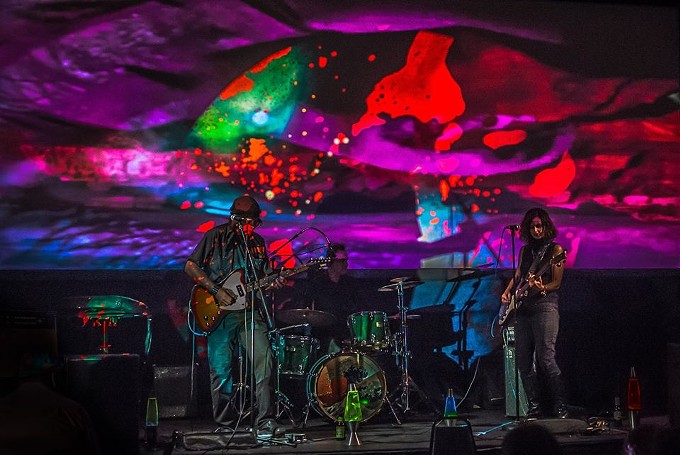 Grab your oil wheels, LAVA lamps and "Have a nice day" T-shirts, because the Psych-Out! music festival is truckin' on through Tucson. Presented by Downtown Radio 99.1 and The Loft Cinema, Psych-Out! is a celebration of all things trippy, both sonically and visually.

"I'm a big fan of psychedelic music, and many other people are as well," said Jason LeValley, program director for Downtown Radio. "I went to Austin Psych Fest for many years and wanted to bring something like that to Tucson."

This year, the third annual Psych-Out! music festival will be held at The Loft. The lineup includes Tucson bands such as The Myrrors and Silver Cloud Express, Phoenix experimental group The Psychedelephants, and Prescott neo-psych group Tropical Beach.

"It's definitely an immersive experience, as it should be," said Cristina Williams, bassist and vocalist for Silver Cloud Express. "People can sit and listen and just fall into it."

Another performing band to fall into is The Psychedelephants, who have been tirelessly practicing to have a set where all their songs blend into one another with flawless transitions.

"Psych is a great route for small bands to get into," said Paul Balazs, guitarist and vocalist for The Psychedelephants. "The psychedelic scene is popping up more around Arizona right now, it's kind of everywhere."

One of the reasons Balazs believes this resurgence is happening is because the style provides such a unique atmosphere right along with the songs.

"Everyone I talked to has been pretty impressed by the festival," LeValley said. "It's so great to see these bands just do their thing, plus there are light projections and fog machines. It's a multimedia experience, much more than just a neo-psych show."

An aside: psychedelic music has a commanding place in the rock 'n' roll canon with acts like Pink Floyd, The Doors and Jefferson Airplane—but what is neo-psychedelia? It's a newer wave of psychedelic music that came out of the '80s, but exploded in the '90s and beyond with bands like The Flaming Lips, Animal Collective and Tame Impala. Neo-psych bands are heavily influenced by classic psych rock acts, but add modern recording techniques, electronics and trippy pop hooks to create a unique sound.

"It's kind of a hot commodity these days," LeValley said. "Neo-psych is a sort of buzz word."

Psych-Out! Is one of a few local events Downtown Radio orchestrates around Tucson. They also set up shows for the women of rock in Tucson and their own anniversary events.

"We try to give people something different to listen to," LeValley said. "When we started, we didn't want to play the same music as corporate radio stations, but we also didn't want to do the same things as the long-running non-commercial stations."

Downtown Radio has dozens of DJs, and a wide variety of music programs and talk shows ranging from metal and electronic, to lives of local Tucsonans and the stories of their depression.

"I love how they do their own thing," Williams said. "You'll hear some deep tracks from all these different decades, on the station. They pull from such a wide variety of sources."

Downtown Radio helps local bands distribute their music and local residents spread their stories. This is actually another one of the reasons Downtown Radio set up Psych-Out!: to increase their own visibility and spread their passion.

Downtown Radio is a 501(c)3 non-profit organization and can be heard at 99.1 FM in the downtown Tucson area, and at downtownradio.org everywhere else.