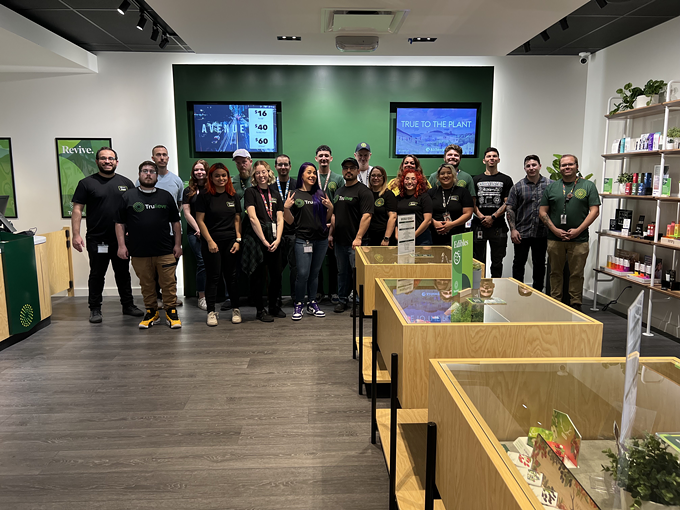 Trulieve Cannabis Corp. held a grand opening of its third, but first Truileve-branded dispensary in Tucson, on Sept. 17.

The two existing dispensaries in Tucson under the name Harvest, will soon be rebranded to Trulieve.

“Over the course of the next year Harvest locations in Tucson and across Arizona will be rebranded to Trulieve,” explained Steve White, president of Trulieve and founder of Harvest Health.

Trulieve stores are more than cannabis dispensaries. The brand has a mission.

“For example, at their newly owned Roosevelt Row location in downtown Phoenix, they’ve hosted water bottle drives to collect water to hand out to the ever-growing homeless population and provide some relief and hydration from the scorching summer heat.”

She said the new Trulieve dispensary in Tucson plans to have this mission with the same impact on this area.

The current Harvest House of Cannabis (HOC) dispensaries in Tucson are located at 2734 E. Grant Road and 1010 S. Freeway, Suite 130.

Trulieve is a publicly traded company so White could not disclose store sales.

“But Tucson has been, and remains, a very strong market for our company,” White said.

In making the decision for opening an additional dispensary, White said they look at market dynamics and access for patients and customers.

“As the second-largest market in Arizona, we believe the Tucson marketplace supports this additional dispensary,” he said. “We look forward to expanding our reach to serve the community with our high-quality products and customer centric approach to cannabis.”

Trulieve came into the Arizona market in October 2021 after procuring Harvest Health. During the next year, existing Harvest locations will be rebranded to Trulieve. Harvest and Trulieve-affiliated dispensaries in Arizona are in Tucson, Casa Grande, Chandler, Guadalupe, Mesa, Tempe, Phoenix, Scottsdale, Avondale, Glendale, Peoria, Lake Havasu and Cottonwood.

The new location on Swan and 22nd, offers a variety of popular products, including Trulieve brands such as Alchemy, Avenue, Co2lors, Loveli, Modern Flower, Muse and Roll One.

“Customers can also choose from a broad assortment of products from partner brands including El Blunto (also, Alien Labs, Connected),” White said. “We also believe in providing truly exceptional customer experiences and our focus on giving back to this community where our team members live and work.”

“Trulieve’s retail employees are trained to provide personalized support to individuals at every stage of their cannabis journey,” White said.

Supporters go over the edge rappelling for Girl Scouts