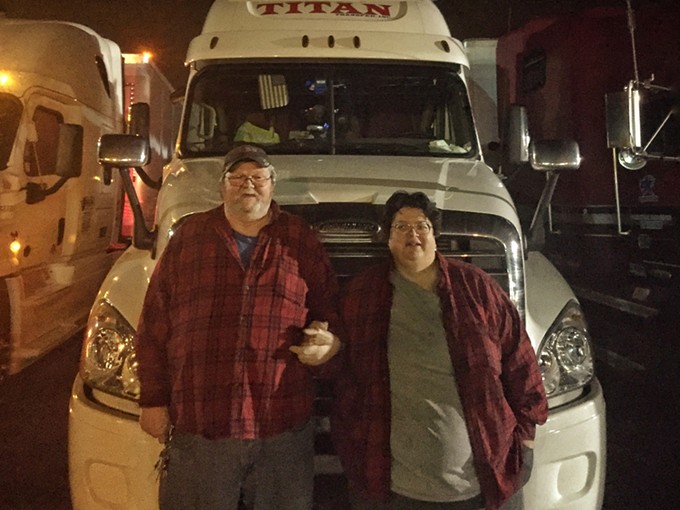 Brian Smith
Bob and Irene Myers and their 2017 Freightliner 18-wheeler.

In the cold and dark drizzle it's hard to tell the jagged edges between earth and sky. The potholes are filled with rain and yellowy light from the Triple T over by the freeway. Out here lurking for menacing worlds, roadside cons or desert derelicts, but it's dead. Eerie windy black.

Out back, dozens of 18-wheelers with trailers holding 30,000 pounds or more are parked at right angles, lined in three quarter-mile length rows. Could be hulking tombstones but some just hum in idle. The warm cubicle-cabins with hearts beating inside, screens glowing on unshowered bodies stretched out on beds.

You'd think New Year's Eve, a night forever filled with primal sexual urges would be in full tilt, filled with false joys and grim buoyancies, truckers going out of their skin, hurting for comfort. Not a lot lizard in sight. Not a single distant howl.

Beyond these trucks to the south sits the independently owned trucker landmark, Triple T (Tucson Truck Terminal), on I-10 at South Craycroft on Tucson's far southeastern side. There's a Circle K and some chain-linked yards east of the trucks.

Inside Triple T is Omar's Hi-Way Chef Restaurant, a 24-hour heaven that tonight closes at 1 a.m., given the holiday. Its interior coffee-shop is a lovely anachronism of American nights. Trimmed in cerise and pinks and greens, it features a fetching horseshoe-shaped counter and an elaborate menu.

It too is dead. Almost.

A woman relates a story of how her friend dropped weight by only eating pizza ("can you believe that, and pepperoni too"). He sits across from her at this table, their food long eaten, listening hard.

There's another guy, late 60s, old Reno lounge handsome in a dark blue shirt and a kickass gray pompadour. A true silver fox, aged in white Cadillacs. I peg him as a trucker blessed with natural sartorial flare, but he has a woman in tow, and she doesn't appear roadworthy, her hair is even more perfect, and she carries a purse. On his way out, he pays Kelley the cashier, works his lower teeth with a toothpick and carefully examines pie slices displayed behind glass — pies so good that this diner has received attention on national TV shows. There's no hurry in their steps. The rare rain outside.

Kelley counts money, alone behind the cash register near the entrance where a million travelers have passed. She seems happy in the company of co-workers. I imagine maybe it’s because her own children are grown and gone, or there's deeper or unspeakable sadness she’s learned to dull with neighborly civility. Could be she’s just damn happy.

When an employee whose shift ended departs saying "I'll see you next year!" it's sad in that beautiful way old diners are sad, full of stories and reminiscences, virtues of dead generations. Can’t be replicated in new diners modeled on fake nostalgia. But it's exhilarating because it's easy to fall in love with strangers who don't look alike, who aren't trying to be anything.

Kelley's register opens and she swoops change from the drawer, counts it and drops it back in. The pair of older waitresses in matching green shirts chat softly with a bespectacled gentleman server wearing white kitchen overalls, and a dishwasher they call José, who moves in and out. Its ambience is a song much better than "Auld Lang Syne," or anything a media-anointed star or show could ever create at 11 p.m. on New Year's Eve.

Darin Jones orders takeout for himself and his wife, who's asleep in their truck. The 45-year-old is friendly and lucid despite the road-weary eyes. He's hauling onions from Lancaster, California to Miami in a flatbed, and the ongoing rain presents challenges; the tarp that protects the produce from moisture requires constant adjustment.

This guy has been a pro driver for 16 years but is only recently independent — he doesn't haul for a specific company—so he doesn't exactly know what happens if he delivers a sour load, it's never happened. He owns his truck outright, has another back in Ohio. He's got some kids. It’s never easy.

His loads come through brokers, who take a piece of his action — upwards of 30 percent — and he's responsible for his own insurance, truck upkeep, gas, tags, the whole bit. He's hoping once he and his wife drop the Miami load in two day's time, a broker will have arranged a new load to Ohio, otherwise they'll lose good money heading home.

But, he adds, they had a load to Oregon from Ohio and that took them to see a relative. "Sometimes it works out that way."

I remind him it's nearly midnight on New Year's Eve. It doesn't register much. He collects his takeout, pays and heads out in the drizzle to his wife.

Big Bob and Irene Myers shuffle into Omar's and he announces to no one if his “belly don't fit, I ain't gonna sit." Not sure if that's self-awareness or bitchiness. Fleshy belly protrudes from under a blue Titan T-shirt, the breast pocket holds pens. He wears leather suspenders joined with Buffalo nickel heads, custom made.

Bob and his wife Irene drive for Titan Transfer. They're hauling a load back from California toward Tennessee, and they'll be there in a day and a half. They've put nearly 120,000 miles on their company truck in six months. They've been married going on 22 years.

They each squeeze into the spacious booth, and, as if sick of the sight of one another, bicker. Irene reads the menu out loud ... "Sounds better than meatloaf!"

When asked if one would survive without the other they look straight into each other's eyes and laugh.

Gail the waitress with the gray braid down her back, walks the couple through the menu, like she remembers them. She might; the couple have driven through here many times before.

Irene and Bob met on the road, sort of. She a security guard and he a truck driver. She explains Bob suffers arthritis from a horrible motorcycle accident years ago. "It was in the '80s, I went head-on into the back of a pickup stopped at a traffic light, going 60." He'll retire from trucking in September 2017. "I'm done with it."

They'll only work for a trucking company like Titan now. Owning your own truck, he says, is risky as hell and "it ain't worth it. You're responsible for everything." Now, if his truck breaks down, Titan fixes it. "You don't worry about insurance, tags, fuel. None of it."

Gail soon returns with the over-portioned meals, and the couple dig in. Bob has no teeth and gums his food. No need for dentures. Irene says the toothless thing is easy. "He can even eat steak!" Bob nods like he's blessed. "My mouth was all full of poisons and she made sure I got my teeth pulled." Sometimes a noodle drops from his mouth onto his shirt. Irene won't let the moment pass without derision. He's a good sport.

The clock hits midnight—it's 2017—and Irene produces pictures of her Boston Terrier on her phone and launches into family histories. They’re equally tragic and sad. How her sister died two years ago from cancer — her husband was bringing asbestos in daily from his work — and how she takes care of her 74-year-old mother and 28-year-old nephew because no one else in her family will, and she obviously loves them. She had a hysterectomy and the cancer is gone. Three and a half years ago she and Bob came off the road to find their doublewide home burned to cinders, everything they owned stolen or torched. The sheriff investigating the fire died mysteriously soon after.

"They got some places up there where a person might never be found," Bob says. Irene produces phone pictures of the burned-down property and they shudder and chuckle, because that's all there is to do.

So they bought a house nearby and its neighboring property for $35k, and it'll be paid off with one final payment when they return home. They've been working every day except four days a month to earn the money to pay off the place. They can earn 2K in a good week. She produces a photo of a pretty little modular house with aluminum siding on acreage filled with forest. Hard to believe they got it so cheap.

"It's because it's Tennessee. Nobody can afford nothin' there," Bob says. He blames his county's economic disenfranchisement on Obama. He listens to Fox News when he drives. Gail, a server for the ages, overhears. She steps in and talks of her dogs. She has six. Her eyeshadow matches her watch and shirt.

It's nearly 2 a.m. and we're out in the lot. Everything is oversized, the trucks, the sky, the roads, the diner sign, the rainswept parking lot, the people. Bob gives a tour of the Myers' truck. It’s a formidable 2017 Freightliner 18-wheeler, able to roll at high speeds a max gross load of 80,000 pounds. The driver's area is like an airline cockpit, with up-to-the-moment enhancements and systems to help prevent inelegant driving. Bob says it "ain't what it looks. It's pretty easy to drive." The back sleeper cab sports a double bed, a microwave and other such homey additions.

The Myers have a tough schedule, so he drives nights, Irene days. They kiss and she climbs into the sleeper to crash. And soon the 500-horsepower motor fires up and rumbles, and the monster rolls out and exits this remote desert lot, where rain always feels like an ambush. Bob and Irene turn and head east on the freeway, toward all those corporate truck stops that are nothing at all like the Triple T.