A Capote doppelganger, heady nostalgia and the wonders of ‘Xanadu’ 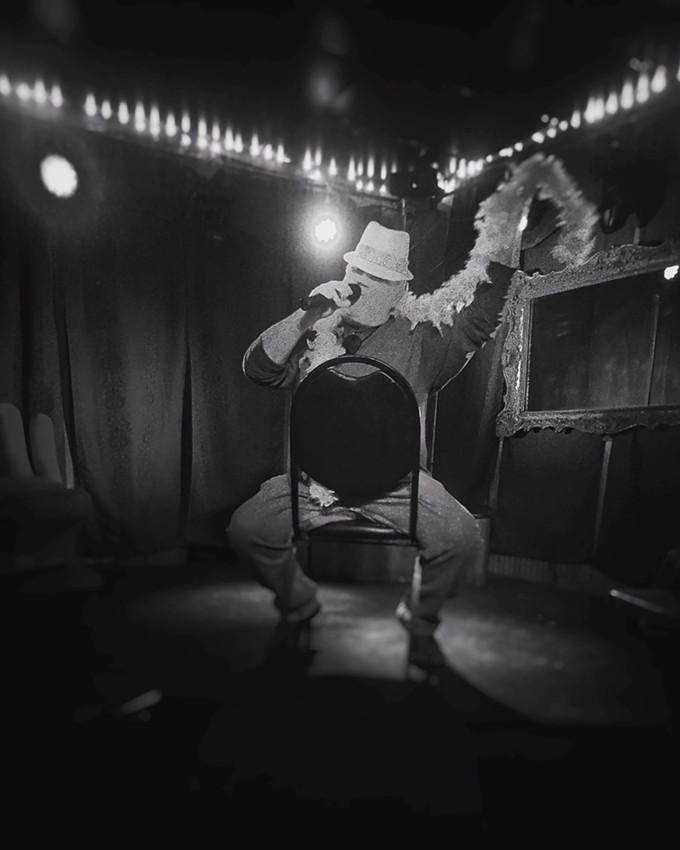 Brian Smith
Bryan L. does Liza at the Mint. 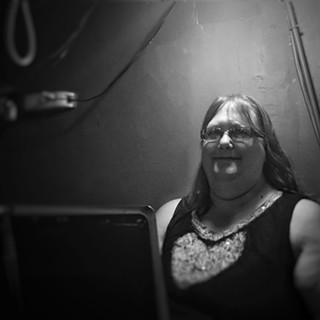 Maybe it says something that when Bryan L starts talking about five holes drilled into his head I can't stop listening to him even though "Moonlight Mile" is playing. The song's a tune-everything-out heart-stopper that freezes me in my tracks, in my very being, no matter where I am, every single time. The greatest Stones song there is.

Then he looks down at the table where we are seated so I can see the top of his head and he parts sections of his thin blond hair to show me just where those five holes were drilled. He describes in clinical detail how he felt the pressure of the drill as it bored into his skull.

Over the rare Jagger melancholy I learn that Bryan was never prone to headaches or hangovers before the real headache kicked in and when he visited a doctor they discovered the three tumors rooted on his brain. "I should've been dead a year and a half ago," he says.

So he's legally blind in one eye, the radiation medicine made some teeth fall out and the cancer is in "medical remission." And he about died before that, too. He'd suffered childhood leukemia and onetime nearly had his head knocked off inside an army tank. Then they cut melanoma from his face, and just in time.

Now Bryan's handsome and eloquent in a Truman Capote sort of way though people other than me tell him he looks like Philip Seymour Hoffman. Nevertheless he's unsatisfied with his reflection in the smudged mirror behind the bar, between the obscure silhouettes, and so he hates having his picture taken, unless he's doing karaoke. It's Sunday karaoke tonight but it's dead so the jukebox is on instead.

One night several months back I watched in awe as Bryan donned a red feather boa, a too-small fedora and employ a chair as a dance partner to perform a slinky-sweet karaoke take of "All That Jazz," channeling both Catherine Zeta-Jones and Liza Minnelli, if you can picture that. Right here at the glorious Mint, this scuzzy-resplendent den that sits on that stretch of proletarian blue near Alvernon Way on Grant Road, as it has for decades. (The Mint's newly updated interior of blousy curtains and western motifs probably didn't come cheap, relatively speaking, yet it still somehow adds to the bar's scuzzy resplendence.)

Bryan drinks quality liquor and has one of those bitter-happy smiles that says many things but mostly that he's defiantly jolly, celebrating life in the moment with woots and toasts and songs and karaoke, sometimes shouting things with arms spread, exclamations that begin with words like "I'm alive." He's a droll storyteller, and is immediately kind, and can be sort of bitchy with his lifelong friend Roberta Dawn who's sitting right here with us. They've known each other for decades, since they each lived in the Asarco mining company town of Silver Bell, near the older Silverbell ghost town in the desert west of Avra Valley. Their town is gone forever—it shuttered around '84, houses moved or mostly leveled.

"It might've been in the middle of fucking nowhere in the desert but it was green and beautiful, there was a park and a post office, fire hydrants and we had corrals for horses." Bryan says. "My parents were there since the 1950s and it was a great place to grow up. If I can find the cattle guard I know where I am."

Roberta, or "Bert," as she's called around here, is 52 years old but looks 33. She hosts the Mint's karaoke three nights a week and DJs its weekend burlesque shows. The heavyset woman tells me she adores the work but it's barely a living. Lady's got some pipes on her too, and it's obvious when sometimes during karaoke she sings silly macho hair-metal with an alluringly feminine spin.

You could say Bert and Bryan are best friends—I'd say that based solely on tonight's observations—and there's sibling-like love between them. They "were Bobbsy Twins" at Marana High School back in the 1980s.

They can tell each other's stories and tragedies, like how Bryan lost a few real siblings. A sister to whom he was close overdosed on methadone and an alcoholic brother died too young of a heart attack as he was "just driving down the road."

Bert has three children from a deceased ex-husband, and her own parents died separately before she was a teen. She'd left Arizona years ago but returned to Tucson from Washington because she says something told her Bryan needed her help, right around the time of his headaches. They hadn't seen each other in 30 years.

Their reminiscence-heavy yarns involve troubled family histories and their Silver Bell years and a particular "mean-ass mule-packing grandmother." Stories captivate and lift beyond the heightened narrow assessments overheard rising from another nearby conversation.

When it's not crowded inside a bar, other conversations seem louder, and I overhear one later being exchanged between the pretty bartender and a trio of bearded beer drinkers sitting at the bar. Each would obviously love to get into her tiny shorts so they're forcing flatteries on her involving her abilities as a pourer and even about the bar itself, but there's not much competition between them for her attention because each guy knows, deep down, that they don't have a ghost of a chance with her. They soon split.

Bryan lifts my forefinger and drags it over his left brow. There's a small deep crater under his skin. He spent a decade in the army and served during the Gulf War and he came out of it with near-death experiences, prove-it scars and no evidence of bumper-sticker braggadocio.

This scar shows how he got smashed by "a huge piece of steel" while showing a trainee how to fire a cannon inside a tank. She pulled the trigger with no warning and the casing recoiled, smashing Bryan in the face. He basically died, was revived by his war buddies with emergency blood, duct tape and a needle, and then medevaced to safety. "I was out for three weeks," Bryan says.

Bryan was also married and has a daughter in another state with whom he is close.

"I was actually married to a woman? Ha-ha. Does that surprise you?"

Not so much. But I wonder if it was difficult? Army, marriage?

He lifts his shoulders and lets them drop.

The karaoke resumes for a few songs and Bryan strolls onto the little stage to no fanfare backlit by hazy reds and greens and some stringed lights and offers up Billy Joel to four or five in the house including the bartender, and only I watch. This is where karaoke can be incredible. Bryan's got that intangible look in his eye, that there's-no-where-else-I'd-rather-be glint. I swear 100 indie bands touring the country in dumb vans right now could learn something from that look in Bryan's eye.

A middle-aged man named David comes over to me while Bryan sings. There's something about David that'll break your heart. We talk. I wind up asking about his life. He tells me about the accidental death of his 10-year-old son. He says, "I'm just a normal Joe who lost his son."

After a long moment, he says, "It's beyond comprehension."

His eyes well with tears and he sways to and fro and I want to hold on to him to keep him from toppling over and hurting himself further, to keep him steady, to keep him. Sometimes I wonder if there's any pain greater than what's felt by a parent who has lost a son or daughter. Makes me grateful I didn't die on my parents, and weirdly grateful that I have no children of my own.

On a night like this The Mint feels like what I imagine a bar on the main strip in some insignificant blip like Safford, Arizona might've felt like in the '70s, sad places disguised as happy places where people would go to just to keep from falling off the earth. When you can't afford much else, the safety of gravitational force and the pitchers of beer come cheap. Where folks come alive after having been numb all day and I remember that feeling of coming alive and it makes me want to get drunk, hard, especially after being dead all day, most everyday.

Sitting here not drinking but thinking that some of my darkest family shames happened between these Mint walls, back when I was as tall as a barstool. My head fills with filmy scenes that bloom into melancholies so rich I swear I hear my own mother say, "There's a lot of ugliness out there. That's why I come in here, to find the pretty."

Wait. That isn't my mother talking. It's Bryan, next to me talking truths over Bonnie Tyler, pulling me from dead places.

That's why I adore the Mint, and all the places like it that are vanishing, because my nostalgia might not be my own but it's weighty enough in here to feel like it is my own. It's more profound than sentimentality and self-pity.

When I stand to head home, Bryan is huddled in front of the juke, eyes closed and mouthing words to Olivia Newton-John's "Xanadu." The karaoke is shut down for the night and there's no irony here. He doesn't hear anything else and it's like he's suspended off the ground like that, and swaying gently, and Olivia's singing right into his ear and the sonics and words and vocal inflections float directly into his bloodstream straight into his heart. I see now how he's grateful to be here at all.