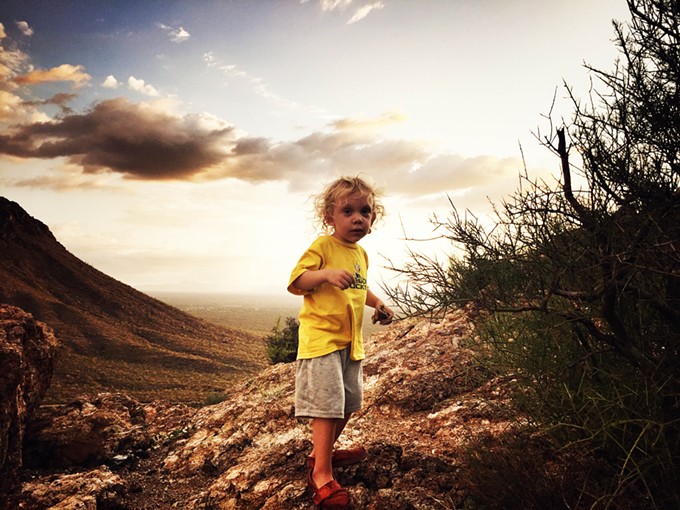 Brian Smith
Reece: You can learn a lot from a little kid.

It is easier to build strong children than to repair broken men. —Frederick Douglass

I turn him upside down and hold him there and soon he begins screaming. But it's closer to a cry, I guess, with some cackle in there, and if you didn't know any better it's probably what it sounds like when somebody's getting stabbed. His face is turning all red.

Three different words, something about falling and mother. I'm a Spanish-illiterate idiot, but I get that much.

We're on a big rock above Tucson and a strong westerly is nearly pushing us backwards. Cars move slowly through Gates Pass below, a lightening-streaked wall of blackness falls over the Tucson Mountain peaks, and the Old Tucson movie studio down in the basin is whelmed in monsoon dust and rain. Too-green saguaros, bloated on so much recent rain, stand tall against it like soldiers on mountainsides.

So alive, electric, like this upside down three-year-old named Reece. When you're never around a little kid and then you suddenly are around a super-intuitive one, it's like they're from asteroid B-612. And you vividly see your own inertias, and ugly fictionalized inner-narratives and self-hatreds and you sense how all of it is pretty much killing you. Man, you don't want any kid getting a whiff of that stuff.

He's just another boy against the world, a white Yankee with corkscrew blond locks and big soft green eyes whose first language is Spanish. A kid who doesn't yet understand intolerance and fear and things ruined by too much self-belief, or not enough self-belief. A kid not ruined by debilitating inner needs to have someone else make him feel authentic, or that first kiss with a girl (or a boy). No starry-eyed dreaming on bright handheld screens.

I lift him right side up and set him down on the giant rock, and in that moment—like how sometimes you can think 17 ideas in the time it takes to stand up straight—I think how lucky Reece is to see in his every sightline a world of a million different marvels and discoveries beyond the surface of a desert storm and skylines.

I think of how there's no room for the mean reds in this boy, and how it's impossible to imagine Reece ever hating what he sees when he sees himself. Maybe I'm a sentimental fool, but common sense says that when there's nothing feeding his potential sicknesses there'll be no unhealable hole in Reece's chest as he grows up, therefore no fists jacking in all-white centers of Donald Trump rallies or bloody alcoholic screams from state-paid beds. No lost years ripped straight from the real world, floundering, forgotten and wasted.

But how quickly beauty vanishes. I think of how Reece has yet to give shape to real live boogeymen, to a Mussolini-mirroring dude like Trump, that avarice-drunk mook whose gift to the world is an innate ability to release festering hate from constricted minds like a pressure valve. Reece doesn't yet see the solipsistic ugliness in the Donald, or anyone, or how thoroughly this man—this woman-hater who's so grotesquely used to only being listened to—can disburse shame. So maybe Reece will never be aware of what it feels like to be embarrassed of your own skin color, embarrassed of your own gender. It's fact that Reece, like me, would rather see Donald Duck as U.S. President than the Donald.

I think how hate's learned, and of little boys and girls whose curiosity leads them directly to hems of strangers, how they can fall instantly in love with them, or be perplexed by them, but either way enlightened. Reece's eyes sparkle in the presence of strangers and he approaches them with curiosity—observation without judgment—and I'd watched him befriend the Latino kids leaping on these giant rocks, and embrace and follow a man named Sticky dressed as a saguaro cactus, and feel sorrow for the homeless, and so on.

Reece is already beginning to learn the stories of others, inherently. When you learn stories of others you learn empathy, and then how it can feed and define you. I didn't understand the value of any of that until years and years later. So in Reese I can see that there is no devil, not one that I know, not one that I don't know. Is that possible?

I think of a boy fueled on love, who doesn't eat animals because he loves them. He's lucky too because he'll likely never know welfare birthdays, and his refrigerator is always filled—there's that. And he has a real home and a remarkable mother who teaches ideas of love and art and song and literature and things like how Black Lives Matter is only a bare minimum in humanity's gaze. Reece is never his mother's down time. Back at his home in Los Angeles, Reece, I'm told, helps care for various barnyard rescues and has an adopted Turkey named Joanie, and of course he was horrified the first time he saw a spitted turkey at a grocery store.

Reece makes me think of other men and women who abandon their own children. I'm no parent but wonder who could abandon something like this? What cruel, selfish lives deadbeats must suffer.

I now know his mother. She's a Los Angeles-based novelist who contacted me out of the blue one day to edit her novel. And she was town so we could finish the first edit of her book, which we did. She brought Reece and that's how I met him.

Now we're in the dirt between rocky formations above Gates Pass and Reece is on his knees building a house from stones and things, and he buries sticks for the plumbing and electrical lines, digs holes for a bathtub, toilet and sink, for animals to drink from too, and clears a road to and from, and it turns into visual storytelling. He's reproducing mental images of the bigger idea of home, and there's self-reflection. He occasionally breaks into a song by The Smiths and one by the Chris Robinson Brotherhood, in little-kid English, but the melodies are there.

Make the world stop. Make it radiate love so pure that it overpowers blind hate. Maybe that sounds corny as hell; maybe the gauzy innocence of a boy makes me a harebrained optimist. But this kid inherently chooses love over hate and anger, and I think of people I know, ones who nearly died prematurely. They're jaded but still generous of soul and can talk of love and hope even after having gone to war battling wrenching addictions, or after suffering poverty-riddled childhoods marked with molestation and beatings and hatred. They talk of this stuff without hiding behind irony or sarcasm or pseudonyms. It's learned spirit and hope, and they're not so busted up anymore, but they had to go to battle for it because it wasn't inside of them. They're in the fringes and minorities, but they're brave ones. Reece already has it in him.

Later that night Reece is strapped in his child's seat and he makes up a song, playing a guitar he made from straws. Sings a ditty in Spanish about a guy under a table who's sad because the wine is gone, or spilled, or something. Great song.

Then we arrive at a record store, Zia on Speedway.

Mother says her son wonders why Kid Rock's music is so bad? Reece has yet to ask a stupid question. I began to say something bloated about how Rock's a talent-free hack who rode the backs of gifted, black Detroit rappers to fame without giving them any credit, but I stop myself. Instead, I tell him that all he has to do is listen to the music. He'll hear no soul there. But he already got that.

He walks out of Zia with Harry Nilsson's The Point, so far the best adult kid's musical parable ever. It'll reward Reece with meanings for years.

Reece will likely live to see the year 2100. Think of that: a year that very well could be fraught with political insanity and social insanity, but absolute scientific amazement. Reece, a thigh-higher who inadvertently teaches that rewards are everywhere, and if you can't find them, you'll still have to look for them, or perhaps you're dead.

But he'll make bad choices too, get lost, and drunk or high or whatever, maybe wind up in dark places, and his heart will get shattered and burned. He'll stumble, fall, but he'll pull himself back. He'll be able to pull himself back because his mother understands the truths and she's setting the boy up on solid ground, overseeing valleys of sun and valleys of rain.