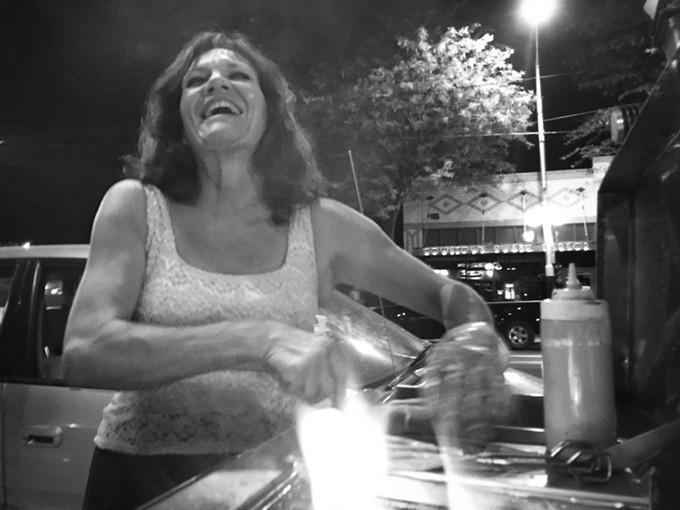 Slate-gray eyes skitter about the avenue like a desert bat obsessed on a streetlight. She's street-tough and trembling, searching out some joy. Then the final, clumsy realization that, between New Mexico, Seattle and now Arizona, from detox wards to university classrooms to the streets, she's seen it all and living long on borrowed time. Panhandling Fourth Avenue, she begins to weep softly.

Shelly Johnston is without home, pushing a baby stroller that contains things obsessively dear to her now, including her sleepy dog Moe and a Big Gulp cup filled of water and ice that hasn't yet melted. She's hoping to earn enough coin to eat on before the long trudge to her bleak refuge in the bushes somewhere behind the Tucson House, before cruel urchins ransack it and seize her spot on the earth. She's not wearing shoes but her filthy feet and ankles look powerful, manly and athletic.

Then Gino appears, a pointy-shouldered street musician with equally flitting eyes and kickass hair, long and straight. He’s raw and he hugs me often. He can talk: his stolen tambourine and a broken guitar and how a woman's breast had fallen off and had to be taped back on.

And a homeless black guy called Wildcat, stooped beneath a streetlight, behind blurs of sidewalk passersby. He's frightened, invisible there a little.

The trio form community around Dorreen Martinez and her hotdog cart, a wheeled and silver-glow kiosk on a well-lit section along Fourth, between Eighth and Ninth Street. She's doling out gifts, including one mesquite-grilled dog with all the fixings that looks like an entire meal in Johnston's shaky hands. She hooks up Gino too, gratis. They each offer up their love of Martinez before disappearing into the night. Wildcat is no fan of dogs, especially wrapped in bacon, despite the hunger.

He rubs his bloated belly. "I can't eat pork, man, and I'm eating for two." Martinez understands Wildcat's predilections, hands him a bottled water, and asks if he needs anything. He moves up the street shaking his head.

EDM thumps from open car windows, hip hop blurts from outside speakers at O'Malley's Bar & Grill, and Tucson Streetcar brakes squeal often. Another Friday night and Fourth Avenue teems with the well-groomed and floppy-fringed, the thick and the thin, boozy boomers and millennials, the El Salvadorians, Asians, Jamaicans, Mexicans, Native Americans, and whites and so on. An impossible-to-dissect melting pot of ethnicities of the new Old Pueblo, at least how it’s revealed down here on Fourth.

It’s Martinez' street parade. Returning customers kickstart the same conversations that didn't end the last time they saw her—last week, last month. She remembers. She works and slaves over dogs too, in piquant, grease-flamed smoke. All sweat, haste and love. The smell of sizzling zeppelins and bacon brats and Polish sausages, the Sonoran-style dogs with beans and green sauce, just as her handmade menu advertises, ranging in price from a buck to $4. She's on her feet, talking, laughing, cooking, preparing. Hours tick by, fatigue slow-builds, and this is obvious:
Martinez is one of those who can't help but remind you of the little wonders of city nights: The straight-backed dignity of a wheelchair-bound woman rolling up the sidewalk among a pack of walkers, world-softening streetlight refracting from smudged windshields and storefronts, the lovely train whistle that forever adds a sense of melancholy to this scene.

A tall bearded guy with a strange toothy grin collects Diet Coke cans from Martinez' trash. She recognizes him. She sets down her tongs, steps from behind the little grill, which throbs of reddening mesquite, to stand beside him on the sidewalk. She points up to the rounded moon, marvels at its color and shape. The can collector nods. He’s just collected another, greater, thing.

She returns to the grill, kohl eyes squinting in the heat. She talks petroglyphs, beautiful ones outside Tucson, while serving customers. "Just when you think you know everything there is to know about Tucson," she says, "you see that ..."

A motorcyclist slowed by traffic revs his beast hard, punctuating Martinez’ comment. A graybeard in line caws, "Get a Harley. Pussy!" Folks cheer.

Minutes later, a lubed-up gent named Miguel Madrid orders four dogs. He’s been a Martinez customer/fan for months. "She's the biggest money-maker down on Fourth at night because everyone gets druuuunk. This homegirl takes care of everyone!"

Her tolerance of drunks is admirable, nothing petty at all.

Madrid continues firing loud hyperboles at Martinez, same thing over and over. (“This homegirl takes care of everyone!") Catches himself, is outw embarrassed, and as a kind of excuse, he adds, sheepishly, "I had a bottle of Jack, you know me."

Then his credit card is declined: "That just fucked me up for real!"

She lets him off: “Pay me next time.”

Andy Isham, a long-standing employee at nearby Moon Smoke Shop, calls Martinez a Tucson tradition, an entrepreneurial success story. "She just rocks that shit out," he says, waiting for his dog. "And you know, there's not many of them left."

Each night but Monday, Martinez hitches her food cart to her red Jeep, arrives at the same spot at 10 p.m. and sets up. It’s streamlined and she's efficient: She warms buns on a propane-heated steam table filled with hot water, where she keeps accouterments, beans and grilled dogs hot. Paper plates and things are boxed within her reach, and bottled water and pop fill a camping cooler. A bucket of mesquite wood for the fire sits beneath the condiments table.

After bars close and the street clears she packs it up (and cleans her area of the street). She’s usually home by four A.M. Dreadfully slow nights have her home earlier. It’s not always close to effortless.

In leather booties, a black skirt and white top, the Tucson-raised Martinez resembles a pretty Tuesday Weld in later roles. She married at 21 and stayed that way 25 years, divorced fairly recently. Says marriage often wasn't even close to the best of times, and relates generalized customer comments to simplify: "They would joke and laugh about how grumpy he was."
Martinez and her then-husband purchased this very cart with a tax refund 22 years ago. Taught herself food-cart ropes and has been stationed on Fourth for those 22 years. "I'm not really crazy about changing," she laughs. "That's not to say it's not been so easy. We've had to go to the city council and plead the changes in city ordinances that would've made it extremely difficult to stay in business.

"And the health codes are such that no one should ever think twice about eating off a food cart."
Martinez won't reveal an average nightly take but it's good enough. Her Jeep is paid off, and she can live comfortably in eastside house. Her personal philosophy: "I'm working as hard as I can, the universe makes sure I have all that I need. If you sit and pay attention in the desert you see so much. There's so much there. Watch a bird, how they get water and sustenance, and you keep watching and you see how the desert takes care of them; they get the fruit of the saguaros and prickly pear... It's magic."

Philosophy of experience honed from observation and motherhood, homeschooling and suffering.
Martinez had four kids in those food-cart years (she worked while pregnant or with one strapped to her body), adding to the couple's total of nine (yes, nine). She raised nine children, worked home care for elderly folk, all while running a food cart and overseeing lots of homeschooling for their children?

Yes. Once the food cart showed financial stability, Martinez retired from elderly folk care. "I learned so much from them but there was so much dying."

A knife pierces a heart on Martinez' wrist. There’s an angel on her right shoulder. Tattooed salve for the void her oldest daughter left when she died in a 2009 car accident. The emotional encumbrance of Tess’s death comes in abstracts, or in stories of her life, or how it impacted her other children. Martinez nearly laughs about how her daughter had to overcome a lot. (Tess studied to become a writer and journalist, and was a contributor to, among other publications, the Tucson Weekly.)

A few years ago, another of her children was nearly killed when hit by a car while riding a bike. "I don't think the universe is going to take two of my children," Martinez says. "That's how the world is, that's how my world is.” She wraps a dog in a napkin, hands it off. Says, "there's lots of love."
Four sons and one daughter have helped mom with the cart through the years. One son is now an attorney in Indiana. Another is stationed in Korea, military. The other children live in Tucson. She's a grandmother now, too.

It’s been decades now out here on the avenue. It retains the familiar, an aesthetic (if not emotional) sense of older Tucson. Martinez gazes down the street. Except the one time someone ran off with her tip jar, she's never felt threatened here. "This is the last spot that hasn't changed,” she says. And Martinez could be operating a larger food truck. There’s been opportunities to open a restaurant. No thank you. She wants to stand next to the person, "ask them how their day was.”

Some guy in a purple striped shirt is shouting, slightly weaving in place. Drunk-dude menace, thinks he's funny. It almost is.

"Wieners! How do you want to garnish your wiener?"

He turns to Martinez. Chirps, "Hot dogs! This is just a regular hotdog stand!"

She retorts: "No, this is an irregular hotdog stand."

He grins, steps back and shouts, "a regular hotdog stand!"

He spots Wildcat, who'd vanished earlier but is now sitting there under the streetlight again. Drunk guy steps over and looks down at him pityingly, tongue lingering slightly out of his mouth. I brace for Trump-inspired hate to burp from the drunk's mouth. But wait.

Wildcat looks at the guy, goes, "You ashamed to talk to me 'cause I'm a Wildcat?"

"You think I'm ashamed to talk with you because you're black?" Drunk guy says.

"Let's go," the drunk says. "I'm gonna take you somewhere nice so you can sit down and have a proper meal."

Wildcat looks up, shocked. "Me?"

Wildcat stands and the two disappear like buds into the Friday night humanity alive on Fourth.

The night winds down. Martinez garnishes and dresses more dogs, exchanging them for cash or plastic. Elle King's "Ex's and Oh's" rises from her portable player perched on the shelf next to the mustard, and she sings along softly, swinging her hips and shoulders. Lighted faces pass, noses to phones. They miss the present tense, the life and little glories revolving all around them. But it’s like they have radar, their last-second sidesteps to avoid folks in the hotdog line.