Just some guy hanging around in the Old Pueblo 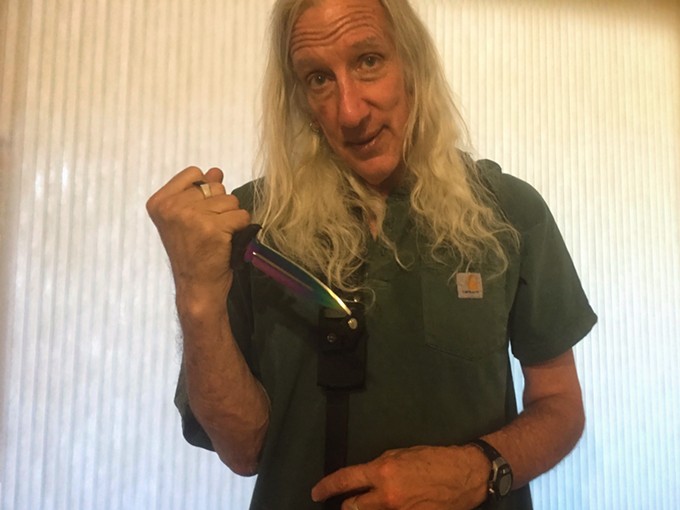 Brian Smith
Skip with one of his knives. 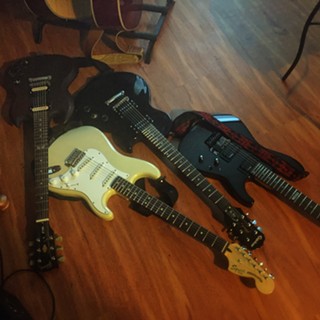 Meet Skip Blum. Little serpents dance in the air above his head.

He's lanky and old and could be one who'd road-managed Little Feat back in the '70s or who'd travel to the Hamptons and Florida with an ounce of blow in his briefcase talking endlessly about the recording studio and record label he owned that nobody had ever heard of. Maybe they were the same. (Wait. Skip says he did sell ounces of blow in the Hamptons and down in Florida.) Or maybe a Coen Brothers caricature, a walking, talking allegory for the decay of the classic rock 'n' roll era and its attendant sensibilities, what's left of its rock-star scheming, its endless cash cows, its cocaine cowboy casualties.

Anyway, "I passed my nine lives," Skip says, exhaling another serpent of meth smoke. Then he picks up a guitar and strums along to The Kinks' "Celluloid Heroes," a semi-tender rock 'n' roll epistle to failed dreams if ever there was one.

He stops playing and dumps what's left of his meth out on little desk and pinches a few more translucent chunks and drops them into the glass pipe.

"I'm not like these people around here," he says, lifting the thing to his mouth. "They smoke this shit and they can't stop; on and on for days. I only smoke a little, and then I play guitar. I sleep a lot, every night."

He places his lighter under the bowl, sparks a flame and sucks. The flavored vitamin water in the low curve of the pipe bubbles ("adds a bubblegum flavor") and the meth vapor curlicues, passing between his lips into his lungs, ballooning his blood vessels, and his heart and nervous system kick into overdrive and serotonin rushes his brain.

Yet he just sits here. No inner-animal unleashed. No bizarrely contorted countenance. High or not, his thin white face stays blank, as if chiseled into a tree trunk. Dude would make a kickass three-card Monte man.

In fact, Little vitality pumps through Skip's limbs, not like you'd expect after a long pull from the pipe. For one thing he's suffered a couple of strokes in recent years. Amazingly, he sucks an inhaler for chronic pulmonary disease and talks of collapsed lungs. I ask him if the meth is such a good idea.

Then he muses leisurely about his favorite music, talks about playing with Dire Straits decades ago (uncredited, but he produces evidence of it), a stint living in Jamaica ("I was a white Rasta") where he befriended and jammed with reggae star Justin Hines and smoked the kind of weed that guaranteed you wouldn't get up off of the street. He relates tales of traveling to islands with Dick Clark and his wife, and of old friends, like actors Melissa Gilbert and Bo Brinkman and how they loved his Manhattan apartment so much they purchased the one above his. Other yarns involving bit players and East Coast has-beens and urban-legend thugs.

He leafs through squeaky pages of a photo album that show his family's spread on Long Island's gold coast (Muttontown), one of America's wealthiest blips. Yellowed snaps show fresh-faced, long-haired Skip with horses and German shepherds he raised, and his mom, dad and two brothers, an ex-wife and daughter. He points out shaggy-headed musician friends who died young. He tells of a cousin, a higher up in the Jewish Defense League, who was gunned down in New York City.

Skip knows his life's narrative is listener-friendly, and it comes in fits and starts. The visuals help even but he can't remember much. He has no memories of childhood or high school, for example.
Why?

"You'd have to ask my psychiatrist."

Let's back up. I met Skip through a Lyft driver who said he was living Scorsese script. The mob connections and he smoked through two mill worth of cocaine.

I drive Skip to the Walgreens on Speedway and Craycroft. Though his face looks like what might result if you combined Joey Ramone with Howard Stern, with added hard road, and his speaking voice sounds like Winnie the Pooh's Eeyore with a light Bronx patois, he strolls into Walgreens with an air of one who once had lots of money, like an old English rock star who's been hitless too long, sequestered in some over-mortgaged countryside estate. With his cane and flowing gray mane there's an almost diva-like grace and eccentricity—that particular kind that only money and privilege and age cultivates. Yet the 63-year-old wears ratty blue jeans with worn knees, a tired green shirt, and carries a camo backpack.

Dave, the grinning man behind the register, says "Hey! Skip! How are ya today?

Skip steps past him. With no eye contact, says, "couldn't be better."

Dave looks at me, chuckles, and adds, "Skip pays the light bill here."

I follow Skip as he negotiates the aisles, sometimes the same one three times, comparing prices and collecting things: A box of cookies, hydrogen peroxide, crackers, flavored water, gum; "snacks" to fortify his body so he won’t “faint." He collects a script he called in earlier. He takes pills for anxiety disorder, for his cholesterol, for his depression, and so on. So many pills.

He's had the anxiety since he was a kid. And there are skin problems. Forearm scars from cancerous operations, and the cancer’s still in his body.

The strokes he suffered landed him at Campana Del Rio, assisted living for the elderly. Skip laughs at the inherent futility of that: "I'd wear nothing but my cowboy boots and underwear around the place, in the front, the dining room. I'd play my guitar through an amp in my room. It was me and all these 90-year-olds. Of course I got kicked out of there."

Skip strolls aisles and talks mob. "They're still around. It's bullshit that it doesn't exist, there are crews in Tucson." Says the FBI popped him once and let him go. Did jailtime for drugs too. Says he’s not allowed to know how much his money he has or where it is. Dad left an estate, life insurance, that's all he knows. His condo is paid for. His brother handles his finances. He never sees his two grown daughters either, both born in New York City. His coke freebasing made them disappear. Wife too. "I miss them all the time."

We hit Headhunters tobacco shop on Speedway, then Rainbow Guitars on Campbell. Everyone knows him. The day progresses and more things about Skip stand out. He's perpetually self-deprecating and fiercely intelligent. He once earned his teaching credentials on the fly and taught fourth grade for six months in Tucson, to jumpstart a normal life. Didn't last.

The Bronx-born Skip has two younger brothers. Dad hit paydirt working for a Rothschild in finance, made a killing in banking. After high school Skip split for Israel, busked guitar on the streets of Tel Aviv, on the Dead Sea coast, and weathered bombings during one of many Lebanese-Isreali wars, during the rise of the PLO, in the '70s. He ran out of money, stranded in London.

He later graduated from Syracuse University, degreed in marketing and advertising, and earned a masters from Florida's Hofstra University. He declined mad job offers to work in a bowery leather shop and live in Little Italy when Blondie, Ramones et al were breaking Manhattan. He was a China Club regular, sometimes the Mudd Club and CBGB. He got involved with a recording studio because he wanted to be a rock star. Made a tidy fortune heading up a giant limo company "owned by the mob."

Two decades ago Skip landed in Tucson  and holed up in the Catalina Foothills.

There's drug-dealer futility beneath the surface of Skip's sprawling, boxy-anonymous condo complex near Wilmot on Tucson's east side. Waning afternoon light through smudged windows gives his sparely furnished place a suffocating despair. Like heartbreak. The phone rings and Skip learns the guy who brings meth into his complex got arrested. Skip ends the call. "He got caught with $100K in cash,” he says. “Eh, they're all going away sooner or later."

He shows me his extensive collection of custom-made knives that he uses for protection and how he fitted his place with bulletproof windows. "I've been ripped off too many times."
He asks if it's cool if he smokes some meth.

The smell makes my heart skip, years of meth sobriety feel inconsequential, perfunctory. I want into that festering, shuttered world, to never come up for air. This is the first time I've been around meth since I managed to quit it, and my entire body screams for it. Frightened, I feel nauseas. It's no wonder sad people adore crystal meth.

Defined and discounted by his mistakes, Skip's long past the point of shaming himself because of the drugs. His power never outweighs his pain, never allows for the acceptance of how things will never likely go his way again. He's regretful, contrite. Even high. That’s what amazes. He just wants to get by. I feel only tenderhearted toward him.

"I've tried to grow up,” he says. “I haven't been able to. I'm just a fuck-up. I'm still here because god won't have me up there. I'm alone a lot, and I wake up scared all the time. I got scared when my parents died; who was going to take care of me? I still don't know what's going on in my life, like where I'm going to be in 10 years. Music is my life, but I have no goals, nothing to look forward to. I get depressed.”

Before I'm out of there, Skip cues up a cassette demo of a New York City band he was in years ago; tunes he co-wrote and played guitar on. We're in the spare bedroom, filled with lots of cared-for acoustic and electric guitars on stands, a few vintage Fenders and Gibsons.

Blum can't remember the exact recording dates, sounds like late '80s, early '90s. The tunes are written, performed and executed well. One's like a classic-rock radio hit, would've sidled up nicely to Night Ranger's "Sister Christian"— big guitars, chesty vocals, syrupy pathos.
Skip sings along: "I just might make it out of here, I just might ... "