A wandering escape finds a vigil, an altar and some gratitude 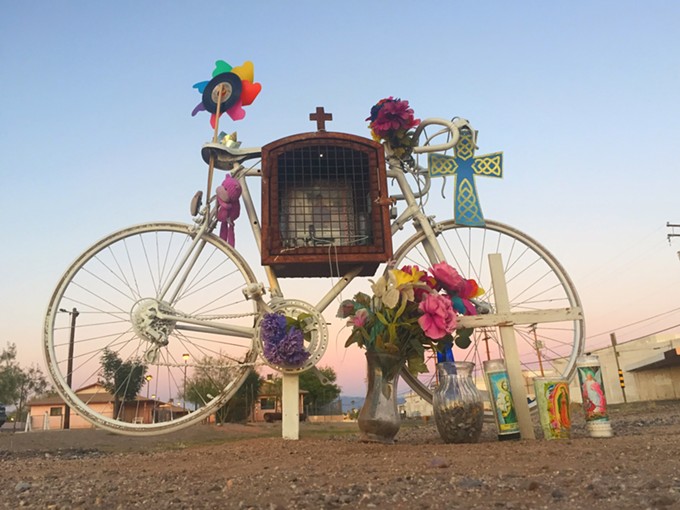 Brian Smith
A lovely altar to a man who in 2014 was hit on his bicycle after he’d purchased bottled water at a nearby store. He was hit by a cop. The cop was never charged.

Headed out for the usual long walk. One of those melancholy Tucson sunsets that color the sky and mountains and air a burnt orange. I walked first to a candlelit vigil in the parking lot of St. Mark's Presbyterian Church near Alvernon and Third Street, held for a 15-year-old boy named Sephaul Booker, shot dead a few blocks away. I’d heard this kid took a bullet, and man did it strengthen that inner Gordian knot, the fear and the sadness that falls over me like clockwork each afternoon. He was a mother's son with best friends and relatives and pets. People loved him. There were about 30 folks at the church. Unusually heavy winds kept blowing the candles out.

The local TV news crews showed up because a murdered boy is news alright. A few minutes of airtime filled with fake newscaster solemnity between ads and a titillating murder graphic. One coifed-up TV reporter’s preeny face was lighted much of the time by her personal phone screen. Her indifference and TV news presence diminished the remorseful stories folks were sharing of Booker, and how the essence of his murder absolutely devalued the neighborhood's soul, how it brought neighborhood folks to bended knees with sadness, regret.  TV's polished-jackboot journalism and pushy faces amplified the fear the murder planted in hearts of those living in this neighborhood. TV goobs should’ve waited on the street.

I did learn of young Booker here, how he got into trouble, his arrest record. How his dad had walked out and how his single mom was in over her head. Another punk lost to Tucson street hassles? Nope. Booker had a brilliant side, quiet, funny, generous. True qualities, according to some I talked with, and others who spoke at the vigil. Two of Booker's friends, 15-year-old Joel Beraca, and 19-year-old Jesus Lopez, were both crying.

"He didn't talk about what was going on with him lately," Lopez said. He’d met Booker five or six years ago playing basketball at the Boys and Girls club. "He'd just say 'It's all good.' But I could tell he was angry and sad a lot lately."

I was hoping to meet the boy's mother. It was too soon and she was too broken to even attend the vigil. Booker's cousin, Chelsea Kiki, spoke to everyone. Her voice and hurt soothed in the wild wind. "I wish I could've been there for him," she said more than once. She told how Booker influenced her own reading habits, calling him a genius.

A Booker tutor spoke too, used "beautiful" repeatedly to describe him. Her voice barely audible because she was so shaken. One person pleaded to "put the guns down" and pastor Bart Smith offered soft words and a prayer.

The group was led in the gospel-tinged "We Shall Overcome," and the last refrain rose into the candlelit darkness, sung both tentatively and confidently, and in unison and harmony, by the white, brown and black folks: "We shall live in peace one day ..." Never has that song worked itself into my bones like this.

When it ended I walked on. Sometimes I think walking saved my own life so I do it almost daily.
See, to begin a day is to begin one like any other. I often wake up in despair and then try to work until I eventually hate myself. Absolute relief comes on these ever-onward ambles through central Tucson neighborhoods. These escapes, which start just before sundown and last about 10 miles, stop whatever it was that sucked whatever life from me that day. Coincidences and curiosities become heightened. Contexts reframe. Sadnesses head south, resentments recede. The mystical connection to Tucson rises, the desert’s edge-of-the-world magic. Renewal.

There's no way to absorb Tucson—the eclectic and seared neighborhoods and people—unless traversed on foot. This is how Tucson unveils itself to me, anyway. I can stroll any street in any direction in neighborhoods that stretch out from my house—the working class to the working poor to straight-up poverty-riddled. And more than any other city I've lived in it feels like I'm home. The dogs know that. I've walked by many dusty pound mutts behind chainlink fences so often they quiet and wag tails as I approach instead of barking holy hell. I’ve given some names:  Ezra, Jonesy, Mac and Cheese. Forget music or podcasts, it’s the conversations with strangers. It's where countless stories live.

So many sensations and images for the head to play with. I love the front-yards decorated with rusted wheelbarrows filled with dirt and prickly pear, and those populated with sagging pickup trucks or dilapidated motorcycles or sun-charred lake boats, machines turning to earth.
The lime-colored adobes and mid-20th century cinderblocks with gardens enclosed by chicken wire wrapped around PVC pipes, and all the little concrete porches where drunken couples bicker and laugh in the dirt-dry evening, with beer guts and cigarettes, on wobbly plastic chairs. I love the old ladies on their knees working on weeds in well-kept and loved yards of hacienda-style homes that see hummingbird feeders and octopus agave and sweet welcoming sunflowers.
I love the alluvial debris that collects where washes meet streets, and the rocky loam, silt and grass in the washes, which this time of year blooms into separate little ecosystems, sometimes around blankets strung up between Palo Verde and mesquite trees by homeless folks, and wholly beautified by the bursts of virgin-white oleander blossoms, and sweet-smelling desert willow flowers that lift high over walls of abutting backyards.

Other things bring joy, like mailbox posts fashioned from cholla skeletons and the rare whiptail lizard scurrying for cover under creosote bushes or cracks in walls. The piquant whiffs of home cooking from open-door casitas, laughter spilling out to the street, where people's lives, I like to surmise, are sustaining with some joy. I love the florescent yard-sale signs and overweight dog-walkers with bad hips and three-time DUI recipients with face tats careening shirtless on too-small bicycles down Flower Street. And how the heat generates a tinnitus-like hum in the head that's finally mollified by the evening's faraway train whistle, or KLPX blasting AC/DC from a crappy stereo somewhere.

After the vigil I walked down First Avenue to Navajo and found a roadside altar, south of the Boondocks lounge on the street’s east side. A bicycle symbolically painted white with an offering box enclosed by little metal bars, like a tiny prison. Inside the box are delicate white rosaries, angels and plastic roses and paper cempasuchiles. Gilded plaster of Paris doves and a pitted silver frame houses a short bio and a yellowy picture of Francesco "Steve" Galvez, a thin man with a mustache, short dark hair and a kind face. Another mother's son dead.

A lovely altar to a man who in 2014 was hit on his bicycle after he purchased bottled water at a nearby store. It was dark and Galvez's bike had its light on. Run over by a cop who was never charged.

Galvez, a sacrificial lamb like Booker. Lives that die around us we hardly notice. Another unnatural death to teach. Left me in a state of inquiry, how death gives life, and how life is the practice of dying of old ideas. Galvez was loved, a 49-year-old father and grandfather. First Avenue traffic whizzed by but didn’t. The silence Galvez had left is too great.

Walking home I passed a woman on Stone Avenue moving slowly and singing softly a melody I didn't recognize. It was mournful yet uplifting like a southern hymnal. I slowed to make it last. Her tone gentle, prayer-like. It wasn't what I’d ever associate with Tucson but I imagined Galvez and Booker, and my heart broke. I arrived home with that melody stuck in my head, filled with unimaginable melancholia and joy and gratitude, a near-perfect state that no drug or bottle or prescription or song or book or film or person or any version of any god could ever provide. Not ever. A long trudge to cap another day, the green more greener, the night more night.