‘Taco Tom’ and an eatery too tough, or sentimental, to die 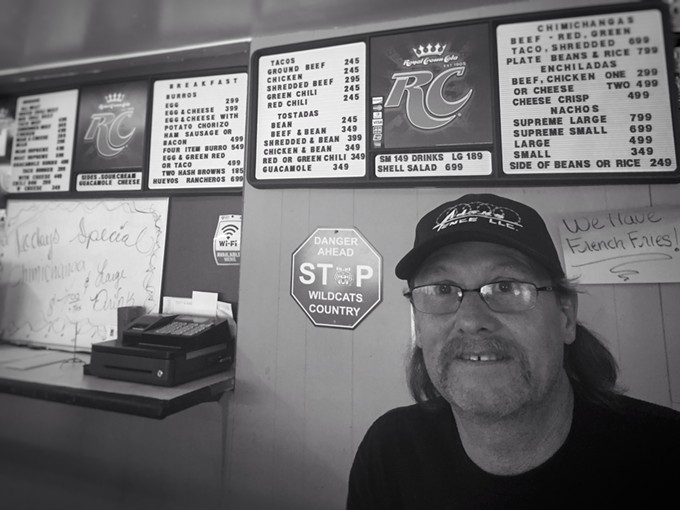 We stand out front of the Silver Room bar and breathe in the Palo Verde blossoms. A too-hot-for-April breeze stirs dust, and searing Air Force jets above cancel coos of desert mourning doves.

The Arroyo Chico neighborhood seems to never end to the south and east, and we don't want it to ever end, because its low roofs, barking dogs and front-yard Marys hold steady Tucson’s lovely visible order.

Across the street sits Tucson Unified School District's safety and security center and dozens of TUSD buses parked in perfect angles. We grew up in this town, attended those TUSD schools, rode those buses.

And no one's on foot here, car traffic's minimal, and there are no outward signs of forward movement. That motionlessness hum, years burned in by the sun.

The desert hums beneath all things here. So much it turns sentimental, giving weight and depth and shape to things that have long receded in the rearview. That yearning's not so healthy, but in this age of boring cultural irony—how recent history is so lazily satirized—and how culture seems to be spinning to an ulterior end, we'll lazily take the bittersweet backward gazes, those involving sights, sounds, smells and tastes of an Old Pueblo childhood.

We hold close old Tucson people, places and things, whether we want to or not — from stories involving the terrifying Pied Piper of Tucson to "that Green Valley grin" blue-hairs wore bouncing on January golf carts. The air-raid sirens that'd jolt this sleepy town awake Saturdays at 1 p.m. to falling in love at a tender age with Joey Ramone and P.J. Soles, both bigger than life in Rock 'N' Roll High School on the giant screen at the De Anza drive-in theater.

And El Taco? Yeah, sure, we remember.

Who could forget that sombrero'd gent, its eyebrow-raising stereotype on signage that upheld the entire El Taco brand? Or that radio jingle jamming our kid skulls, the words "El Taco" repeating endlessly to the tune of "El Jarabe Tapatio" ("The Mexican Hat Dance")? That stuff signaled something in our white-bred kid beings, in the stomachs of my siblings and me, more than any other Tucson eatery. Five kids, parents couldn't afford much, so we hardly ate out. When we did, El Taco, was the shit. Those hard-shell things spiced and juiced up that when you bit in they dripped off your chin to your shirt and that Halloween-orange wrapper. Some kind of glory.

Back to the Silver Room.

Connected to the bar is the only El Taco address, at 663 S. Plumer Ave., in Tucson, maybe in the country. It just reopened from its original location of many years on Country Club Road near Glenn Street. There's an El Taco food truck too, which grew out of the same family run location.
The inside’s suffused with homespun detail—checkered tablecloths, yellow, green and red walls. More rustic than El Tacos of yore. And smells of heated tortillas and simmering beans.


It's Wednesday and owner Tom Stockton's chipper in a black trucker hat and Arizona Wildcats shirt. A dedicated, hard-working guy with a warm spirit. As a kid, his dad taught him a lot about cars, dirt bikes and engines, and also how to cook and run a business.

Today's like any other weekday (he's closed weekends): Stockton arrives early to prep and cook; he wipes, washes, heats, mixes and chops. He makes the salsa and the refried beans (no oil or lard) from scratch. Fresh green chilis and beef and chicken too.

Then he opens at 7 a.m. in time for breakfast and waits for folks to arrive. An hour might pass before one does.

Those who come in order green chili burritos, chimichangas and tacos. The takeaway, they tell me: This place intimately connects them to childhood moments, growing up Tucson in the '70s or '80s, or even the '60s. For these folks — men and women, brown and white, younger and older — it's euphoric recall, and easy to understand. The food, they say, is as good now as then.

One longtime patron, Jeff Huntsinger, steps in, orders. He physically fits his role as an ex-Army man, train engineer and Dead head. He has known Stockton for years, though they've not seen each other in some time. His family owned a Dairy Queen on Fort Lowell Road, not far from the old El Taco.

"All my friends either worked for him," Huntsinger says, nodding at Stockton, "or at the Dairy Queen."

The dudes can reminisce. They talk of the old neighborhood kids like One-Armed Eric—limb lost to cancer—who worked at the El Taco and the Dairy Queen.

Huntsinger’s been spreading the word that Stockton has "opened back up." Good news because Stockton’s budget for advertising is zero. Dieharders hear of the new location and drive from all parts of the city. Because it's attached to the Silver Room, bring your booze in and order food.
Some El Taco backstory: El Taco began in California, created by Glen Bell Jr., the first to mass-produce tacos. In the early '60s, Bell sold his interest in the small chain (mainly in Arizona and California) and created Taco Bell, which became over-the-top homogenized when it sold to PepsiCo in '78.

Yet at one point in the '70s there were as many as 20 independently owned El Tacos in Tucson. Bill and Virginia Stockton had maxed out their credit cards to purchase the El Taco franchise in 1977, after their U-Haul enterprise upended. That's when their son Tom, an eighth grader at Doolen Middle School, began working there. He's been at El Taco pretty much ever since. Hence the nickname "Taco Tom."

The California office that oversaw the El Taco chain went bellyup around 1980, and the local franchises slowly began to sell out to other chains or close up completely, until there was the one location on Country Club Road near Glenn Street. The Stockton family sold it with little fanfare in December 2013. It's now a Mediterranean joint called Za'atar.

"My parents only paid $60,000 for that El Taco," Stockton laughs. "But that's actually a lot of money then ... And it was seven days a week, with a drive-thru window. The whole family worked there."

Stockton and his older sister ran the nightshift when they were in high school. Mom dropped them off and picked them up.

In 1984, grief hit the family in unimaginable ways. A Catalina Highway head-on took his sister. The other driver was drunk.

The following year, dad moved on to teach automotive at area jails and prisons, leaving the El Taco in his son’s hands. The younger Stockton soon began doing everything, "the orders, the cooking, the payroll, the serving ..." His younger sister Gena came aboard and mom faded from the picture. Things chugged along.

Then there was the one time a guy died at that El Taco.

"It was 1990 or so," Stockton says. "I remember I was in the back cutting onions for chili. It was like a bomb went off when this guy's van slammed into us. My sister hit the floor. Two customers hit the floor. An older women dove under the bench and her brother just stayed in the same spot with a burrito in his hand, stunned. He was still holding the burrito when the dust settled. The van driver was pronounced dead on the scene."

Another hit in 2008, the economic dive nearly killed the place. Folks just stopped coming in. Common courtesy evaporated too. "I remember a guy smoking a crack pipe outside on the table like it was nothing, others doing lines of coke or speed."

Stockton’s the split with his younger sister from the Country Club franchise was fraught with tension. "It's family," he says.

The two share El Taco recipes, which are similar, but not exact. The food sports the classic flavor based on the original El Taco spice formulae. Stockton doctored the recipes based on trial-and-error against the El Taco originals. "There were some spices and sauces that we thought we lost after the corporation went out of business," Stockton says.

By 4 p.m. closing time, Stockton's fading. Why not? Dude’s huffed the El Taco routine 37 years. Says he’s considering a fulltime hire to cook and run dinner hours, but he's not there yet financially, or, perhaps, emotionally.

This new El Taco isn't about innovation, nor is it about evolving into something other than the little brand established years ago. For Stockton, it's about sustentation, staying in one place. It’s why he carries the El Taco name. It's a show of province, of bone-deep commitment to working-class Tucson, that which keeps this town chugging along.

In fact, Stockton fell in love with an El Taco counter girl his dad had hired in the early '80s. After 31 years they're still married and have two kids—a son in the U.S. Navy who's done multiple tours in Iraq, and a married daughter in Tucson. Three grandchildren too.

He does have one part-time employee, Pepe Medina, a thin guy who laughs a lot. Medina and Stockton were related once, through marriage. Stockton's son had married Medina's daughter. The union didn't last but this friendship did.