Séances and ghosts, murder and magic 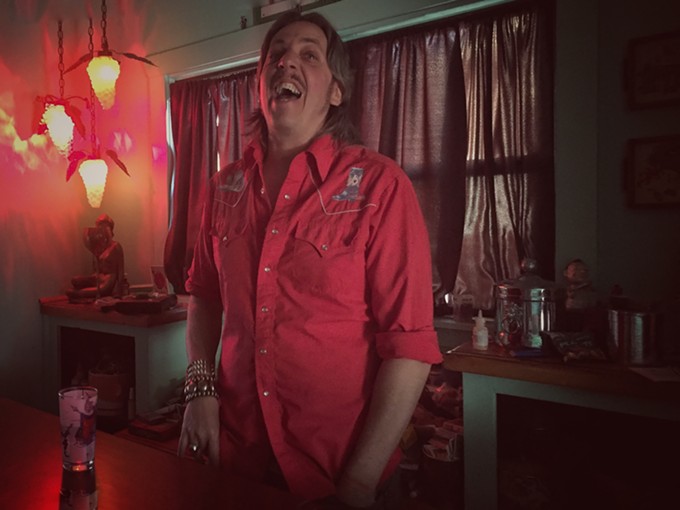 Brian Smith
Kenny at the seance.

Kenny Stewart stands tall in the makeshift séance room of Bisbee's ghostly Oliver House Bed and Breakfast looking like a cross of Beggar's Banquet-era Keith Richards and John Carradine in House of Dracula—studded bracelets, skull rings and vintage vest, jacket and tie compliment a beaver-skinned top-hat and feathers that sits atop his ashen shag. He sips red wine. There's a forward assuredness about him, at first like a snake-oil salesman greasing you up for the big sell: it's all there in the graceful up-turns of his out-stretched right hand, the pistol on his belt buckle and the toothpick balanced between his lips.

"This place," Stewart says, "is a conduit. It does all the work."

The secluded, refurbished Oliver is perched on a rising hill overlooking old Bisbee. It was once a boarding house for miners, famously home to 26 deaths, mostly murders, from the town's folkloric heyday, which makes its nighttime milieu—the creaky floors, hazy lighting—sweet for the big sell.

See, Stewart is a Tucson-based magician, who's often called Magic Kenny Bang Bang, and it's his séance tonight. He's also a local man for all seasons (a certified sommelier, ad pitchman, drink-slinger, bike-trek leader, male stripper, show presenter, teacher of magic, and so on) who happens to have led some 30 séances so far.

At first there's no logical reason to be hustled by this guy, because it is a hustle—all magic is, for better or worse—with little reason to get all "gee-whiz" about the defrauding nature of tricks and haunts.

Stewart leads a group of four on a brief tour through various rooms of the Oliver, narrating with dramatic tension ghoulish yarns from its freakish history, linking slayings to gambling debts and ghosts, and one mass-murder/suicide involving the town deputy and his cheating lover.

Then he directs the four to sit at a long table with lighted votive candles in the center. Strains of period oldies like The Boswell Sisters' contextually creepy "Sophisticated Lady" rise from an antique-looking radio. He says, "You're not going to see a table levitate. This isn't Disney." The séance begins.

He explains the dynamics of the believer versus the non-believer as it applies to the otherworldly, and he replaces obvious terms like "haunted" and "eerie" with phrases like "a little spark of energy." The séance is equally slight-of-hand magic, stage illusion, campy theatre and unnerving personal reveals. It's like he taps into some kind of cosmic switchboard, touching on "residual and intelligent" hauntings, linking the past to the present. For example, he knows the names of dead friends or dead relatives that some of us secretly write down, and he uses black-and-white images of dead folks from Bisbee's storied past to show whether or not we're attracted to the energy of murder victims.

Loteria cards are torn in half, passed around and reassembled to reveal personal obsessions. There's a stillness that tightens when Stewart divulges startling details of one attendee's dead mother, and when a telling message appears on a hidden chalkboard. For nearly an hour it's startlingly dark stuff, disquieting and fun.

This writer may be a cheap-seat observer of magicians and mediums and séances, challenged when it comes to comprehending blurred lines between reality and artifice—the very things that Stewart pulls from his virtual hat—but this guy can make contradictory things seem true, and that makes him frighteningly good at his work.

His suspension of disbelief is big. It has as much to do with how others are drawn to him as it does his innate ability to sell. He's charismatic as hell, and either he's acutely intuitive about people and things or he's a great actor and a beguiling raconteur. He'd make a killer grifter.

His doe-eyed Chihuahua suddenly scurries across the kitchen's hardwood floor and snatches cheese from a mousetrap, and vanishes around the corner. The trap doesn't snap shut. Even Stewart's dog—who's named Lil' Magic and wears a tiny green shirt with an Irish clover—performs tricks.

"Some mouse trap," Stewart moans, seeing through his pet's slight of, um, snout. Then he explains that he's got a real trick up his sleeve for Lil' Magic, one that'll see him talking. "It'll be insane."

Stewart has a kid's-eye wonderment toward life and a keen intellect that he mostly keeps hidden behind endless guffaws and lewd bro speak (when he talks of his occasional "male burlesque" work, he explains a trick he uses that involves a dancing dildo: "It's a great gag, it looks like my dick is dancing around"), but you sometimes get this unnerving sense in conversation that he's looking over your shoulder for the next con, the next ruse. This isn't some dude forever hobby-tinkering; rather, he's one who's never given up on the capacity to dream, even after years of study and reliance on logic and analysis, the sorts of things that go into even a rudimentary card trick.

It's no wonder he says things like "anything I do I don't really consider work." It's because even when he's selling stuff—whether it's wine, ads for area magazines, magic, whatever—it involves some kind of slight-of-hand.

So what if someone at a séance accuses him of being a crass huckster?

"I would to have to disagree," he says. "I'm a real hustler. I know that. But I'm going for true emotion. And there's a fine line between creepy and cornball."

He's weirdly perceptive too, a grownup who understands that people don't really grow up, and that understanding becomes a weapon in his work because he goes for the inner-kid. His sense of curiosity stays wide open, and that's contagious. Gives his tricks believability.

"I don't have an explanation but I know the explanation," he says. That's as far as he'll go in revealing trade secrets, even to his girlfriend. But he'll agree that much of his magic is all about putting creative, cockeyed twists on old tricks, adding that to be a "great magician you have to be a great actor. You've got to be a thinker, and an entertainer and a showman. ... "

Stewart's longtime friend, guitarist and occasional show-collaborator Clif Taylor (AKA Chick Cashman) has watched the magician evolve over the years. He says Stewart could always "lead you down a path and mess it up a bit then conjure up an unexplainable bit of magic that seems to baffle himself. He's intent on entertaining; he rides the lascivious barker thing but he really has this child-like enthusiasm. He's genuinely amused and sincere in shocking his audience."

Born in sleepy Whippany, New Jersey, Stewart calls his childhood normal. One sibling, a brother, also lives in Tucson. Both say their upbringing was upper middleclass.

Stewart had to figure out a way to meet girls, so he got into magic. He tested his tricks on his mother, who suffered severe depression. "I was her court jester. If I could get her to laugh then I knew I had something."

Stewart says he doesn't get depressed—there's no "dark, brooding Robin Williams thing here. I know I have a charmed existence, and it allows me to throw caution to the wind."

He worshiped magician Doug Henning ("he was the porn-star of magic in the '70s), to whom Stewart bears slight resemblance. Did his first gig at 13—as a Cub Scout—a show made up of "shitty stage illusions. I made my own business cards and I had a word misspelled."

At 16 he was working in a magic shop, but by 19 his "hair had grown out" and he learned he could get laid on his own, and he put the magic to rest. He earned a degree in English lit from University of Colorado in Boulder ("but it took me seven years because I liked to party").

He arrived in Tucson 17 years ago, on the recommendation of a friend, after spending eight months in Ireland, traveling and working at a restaurant. He landed a waiter gig, which led to lots of server jobs, which informed his evolution as an entertainer. He studied and became a sommelier, and a wine seller.

After getting laid off from a cushy wine sales gig around '09, Stewart became re-obsessed with magic "like it was my job." Since then he's done myriad magic shows and has traveled to New Orleans to study séances and dark magic. He's house magician on Romo Tonight Live, Tucson's wickedly pop-damaged live talkshow, and his séances are beginning to happen with regularity in Bisbee, and he's just launching a website (thebisbeeseance.com).

Stewart’s making people care about a dying art, one seance at time. That’s his gift. So where’s his future in magic?

"If you would've asked me five years ago if I'd be doing séances in Bisbee, I would've said get the fuck outta here." He pauses, rubs his chin. Says, "I could be in Vegas doing 300 shows a year." Then he laughs, "and for the right amount of money I'll do your kid's birthday party."

Stewart's pragmatic about the magic, saying he hasn't come across any magician or séance leader whose work can "make me believe. Sometimes it's hard for me to be a true believer because it's always me pulling the strings."

But he believes in ghosts. He recounts a story about how he broke into a house above a Bisbee graveyard to host a séance, a house where a prison escapee murdered an elderly couple.

Stewart's previous dog Jack was left behind in the room where they were staying for the night, a room they'd stayed in before. Jack was blind and he rarely climbed on things. But when Stewart was giving the séance, Jack apparently climbed the couch and jumped out of the second floor window to his death. Stewart found the dog dead. He was heartbroken, and frightened.

"I'm telling you, I can't explain it," he says. "It happened the moment I was giving the séance. I want to chock that up to coincidence, but I can't."