How a bike maker became a master craftsman 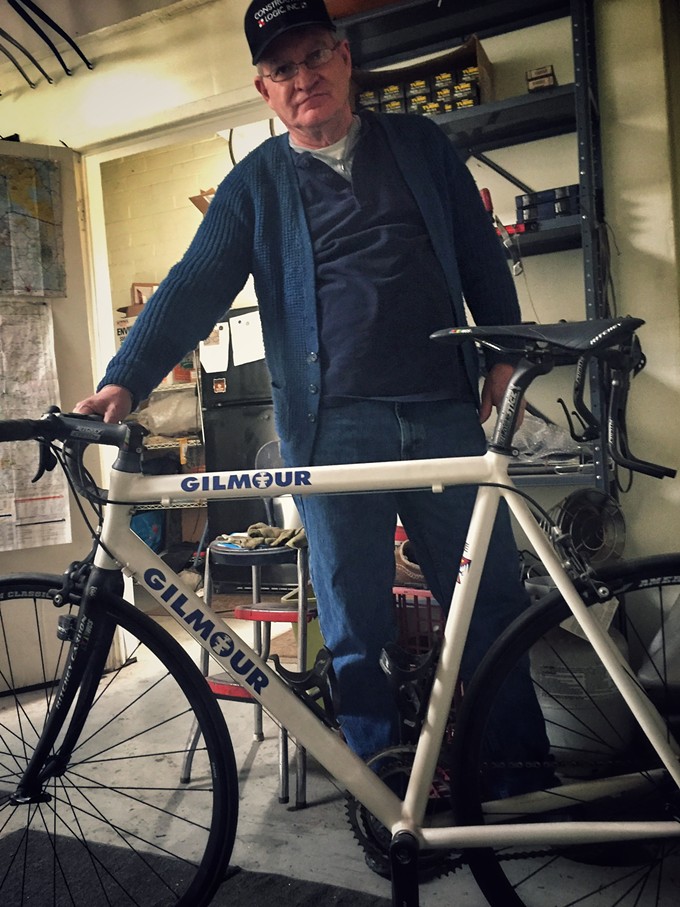 Brian Smith
Andy Gilmour in his showroom with one of his creations.
click to enlarge 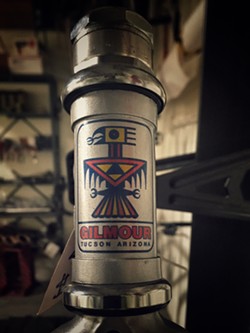 Came to with a blurry finger in my eye. It lifted away, was attached to a hand that was attached to an arm that belonged to a guy with a big forehead wearing a white laboratory smock. Next to him was a chubby nurse with pretty bangs. She was holding two little paper cups, one contained water and the other pills, which she handed to me, and said, "Swallow." I sat up. My head thundered. One side of my body flared in pain like it'd been dragged over a giant cheese grater.

"You have a concussion, son," the man said. "We've cleaned and bandaged the abrasions on your body. You're banged up but you'll be fine."

I swallowed the pills and water and rested my head back down on the pillow.

My handmade, emerald-colored Gilmour hummed beneath me as we tore up a hilly road near the red cliffs outside of St. George, Utah. Sundry details included the stinging in my chest and legs, the crusting snot on a shoulder of my long-sleeved team jersey, the smell of pines and horse manure. I was in a breakaway group with older bike racers, well-trained, lithesome gents like future Olympic gold medalist Alexi Grewal, and the race winner on this particular day, surfer-blond national team guy Larry Shields. We motored turns in a "pace line," creating a slipstream, backs low and straight, aerodynamic. We had probably 30 seconds on the field and our lead was increasing. We crested a hill and began to sweep down a descent. My teenaged legs, powerful little pistons informed on thousands of training miles, controlled by my bursting heart, and an inner agony that controlled my nervous system, told me that my body had its own mind and no way would it slow down. We were less than 5 miles from the finish of the race, which started 50 miles ago.

I was a boy among men in this sport of suffering, bicycle racing my religion, my bone marrow and blood. I figured I was going to be a top European pro, as did Andy Gilmour, the guy who built my expensive road bike and gave it to me for free. His circumstantial generosity and sponsorship helped me to afford things like travel and to enter races hundreds or thousands of miles away from home.

Then the gaping pothole. Plowed right into it and the bike fishtailed every which way and yet—Holy Christ!—I managed to keep the thing upright and careen forward. But I could no longer steer. Something in the bike had snapped. I couldn't fucking turn. Didn't stop because I was arrogant, figured I’d still win. I thought that if the road stayed straight I'd make it to the finish line.

I sailed off the pavement, airborne into an arroyo at 30 miles an hour.

Then the finger in my eye.

A steering column is the part on a bike that connects the handlebars to the front fork. Gilmour had drilled holes in it to lighten the bike even more. Maybe not the smartest move. I should've quit the race. But I was 15 years old.

Cut to late December 2015. I haven't seen Andy Gilmour since the 1980s. We're standing in his Gilmour Bicycles showroom, whose walls are lined with bikes—dozens of his custom frames as well as other vintage machines in for restoration. The showroom's attached to a spacious and somewhat organized workshop, where Gilmour creates and repairs bikes and frames. It smells like a Jiffy Lube, and is outfitted with milling machines, high-pressure welding cylinders, frame straighteners, industrial-sized ovens for paint and welding purposes, myriad tools, and creased bike-racing memorabilia.

Gilmour always had a priestly passion for his work. So it's no wonder he's still building custom-made bicycles for a living, having survived big shifts in bike technology. He’s churned out more than 5,000 frames since beginning in '74. Not mass-produced bikes in uniform sizes and shapes; no, his specialty is hand-made racing—or heavy touring—machines designed specifically for the purchaser's body specifications. They're not cheap. Gilmour takes in limb lengths and even hip placement on the bike to determine the most efficient pedal strokes, as well as tube angles and frame stiffness, all details that have a cumulative effect on how a bike rides and handles.
Some want just the frame and others want the full bike—the wheels, handlebars, derailleur's, etc. There's also aesthetics to think about, the paint and colors. And when you get to know the person who's building your frame from a pile of tubes, it gives the bike a kind of soul, some personality, corny as it sounds. 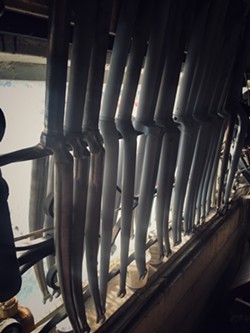 Gilmour is punctiliously eloquent when detailing the frame-building process, from tube cutting to jig fitting to painting. Especially the brazing and TIG welding part: "Everything in air is a pollutant to a weld, oxygen, nitrogen, hydrogen. When you excite the molecules of the metal ..." Then he talks with boyish enthusiasm of "kicked out frontends" or "shallow steering" or the surface "strengths of glue versus brazing."

At one point he settles into gracious and bittersweet stories about his younger brother Robin, who owned a successful construction company in San Diego, and who died suddenly in November of a heart attack. Today, Gilmour's wearing that company's trucker hat. I knew Robin too.

Gilmour has the look of an accomplished and self-made master craftsman. He's been with the same woman for 20 years, which is the same amount of time his shop has been at this location. It's mostly a one-man show around here these days, but years ago, between 1982 and '92 when cycling was a Tucson boom sport, Gilmour's shop was on Speedway Boulevard, and it featured a full retail side. He had 10 employees and he cranked out the frames (up to 300 a year; no mean feat) in a small factory in the back. Gilmour Bicycles sponsored racing teams and riders, including the Tucson Wheelmen. (In the late '90s, Gilmour was actually coaching a Tucson-based women's cycling team). After relocating his shop, walk-in traffic faded and so did the business’s retail side. Doesn't matter. The 61-year-old says he'd never have “become a bike builder if money was a driving force. “
click to enlarge


This Scottish-born son of a geologist father was a star swimmer at Tucson High ("I'd train for five to six hours a day"), and that's when he hired on at a local bike shop, which stirred his interest in bike building and racing. In the early '70s, Gilmour began modifying old steel Schwinns into mountain bikes. He began racing too, so he was there in the ragged beauty of the early Arizona bike-racing pelotons, when cyclists traveled like hippies from race to race, eating health food from baggies and living off nickels and dimes. That's when super-humans like John Timbers and Tim Wilson— now folk heroes in these parts—ruled the roadways. (The third bike Gilmour ever built was for Wilson.) Gilmour retired from actual racing (including a few triathlons) years ago, but that first-hand experience informed his work.

His craftsmanship has earned global success over the years. Professional cyclist Andy Bishop rode a Gilmour in the highly prestigious 1990 Tour of Italy while on the Motorola team, and Ecuadorian track cyclist Mario Ponds won a 1999 world championship in Manchester, England on one, and there have been multiple Canadian national championships won on his bikes, and so on.

We tour Gilmour's workshop and he points to a bike-in-progress fit for a giant. "The customer is 6-foot 7-inches tall," he says. "So tall he had to have his bike custom made."

"I once built a bike for Brian Williams," he continues, "who had changed his name to Bison Dele, a real hot basketball player who went on to play for the Chicago Bulls and the Detroit Pistons. He walked away from his basketball career and died mysteriously in the South Seas. Anyway, he was a real nice guy. ... He didn't stand up very straight so as not to look so intimidating. I shook his hand and I felt like a little kid—this fucker could palm a beach ball."
click to enlarge


In the early aughts, bicycle frames changed forever when carbon fiber became the material of choice for pro racing bikes. Carbon fiber frames are particualarly light, expensive, and difficult to repair. Gilmour, who's one of around 100 custom bike-frame builders in the country, builds mostly from aluminum or steel, which renders him old-school.

"Most of the carbon fiber bikes now are done in what's called monocouque, and they're done in molds," he says. "Molds are very expensive, so little companies can't even do it." He says a kid coming up doesn't need that much money to race bikes; you can still get a raceable, non-carbon fiber bike "for $2,000."

Did the rise in carbon fiber popularity decimate the specialty frame-builder market in the United States?

"Yeah, but a lot of guys cleverly got into niches like building fancy city bikes and commuter bikes."
Which direction did you go?

"Well, I stayed with my racing bikes," he laughs.

But you're still surviving ..."

There's an artisan revival for the classic steel road bike, similar to music’s vinyl resurgence. Good thing for Gilmour. Also, moneyed folks from around the country send Gilmour their classic bikes from the'70s and '80s for restoration, a new Gilmour specialty. He still builds around 25 custom frames a year. 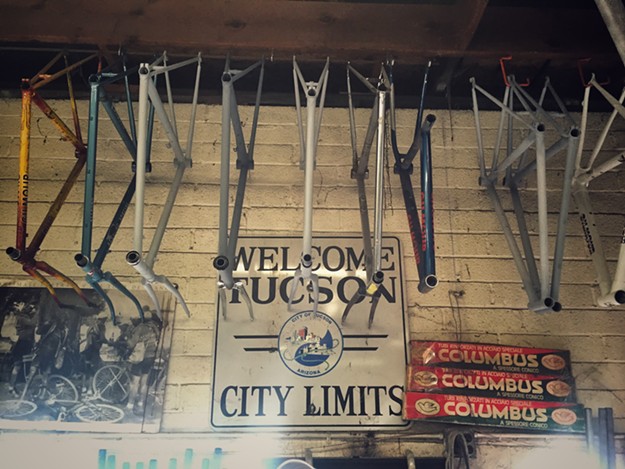