Ghosts of drunks and suicides, mothers and sons 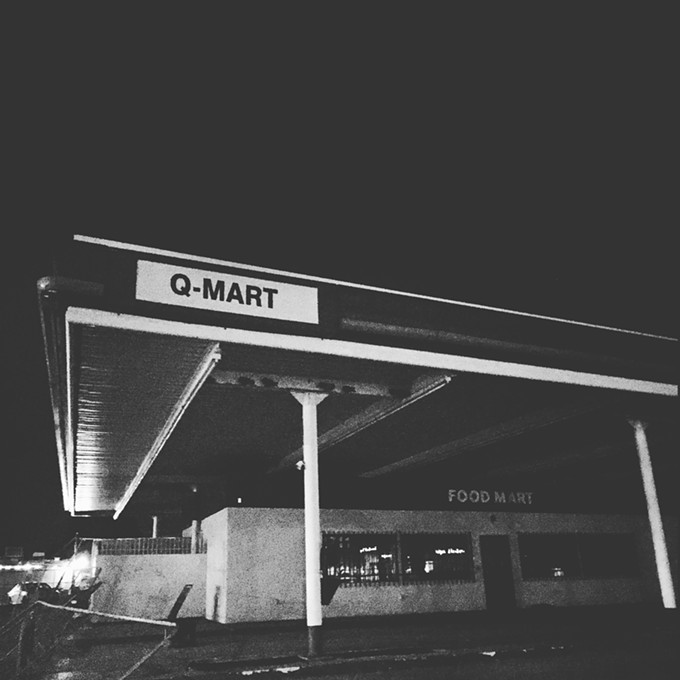 Brian Smith
This abandoned gas station at Pima and Alvernon feels haunted by a suicide mother.

Alcoholic ghosts with suffering faces—ruddy with busted capillaries—circulate the dirty corners and bus stops at the intersection of Alvernon Way and Grant Road, and I step around them on long nighttime walks of the city. I could've been, or maybe should be, one of them. Frightened into menace and floating around Circle K's coffee kiosk, guzzling the stuff by the gallon to ease the meth crashes, and counting out dimes at the Dollar Store for some sad shelf trinket to brighten a stalled, dreamless world that exists nearby between ugly cinderblock walls and bedsheet-covered windows. I could wind up in that place again one day, still, searching insanely in the wrong direction for the shiny and the new.

Whores in unflattering clothes move up Alvernon toward Pima Road and bicker fantastically to themselves. Hoot things at me too, like, “Hey, Yip Yaw, woo-hooooooo,” before they can see me. It’s a gift how they sense men before they see them. Their entire beings wilt or rage in direct proportion to the level of meth or catastrophe in their systems, but in the watery streetlight, they're nearly translucent, their roadside sashays and random hip-grinds seem weightless. They became the focus of so much longing, and I relive it all later, over and over in solitude inside my safe little house near Tucson Boulevard. Their children and mothers, their fathers and brothers and sisters. I count tombstones.

The young mother who lived next door years ago, the last time I'd lived in Tucson. How she committed suicide at the now-abandoned filling station at Pima and Alvernon. How she pumped gasoline over herself and sparked a lighter. How she left behind two little daughters. How before she died, I'd read to her girls out in the sun in my front yard, and they'd stare back at me with eyes all big and curious, faces candy-sticky. Sometimes the littler one would climb onto to my back and yank pieces of my hair.

My brilliant running bud Doug Hopkins and how he'd stay with us in our casita over on Camilla Street. He'd blow in from Phoenix, sometimes on a freight train, and we'd kill nights in Tucson, and in Nogales, like we did when we lived in Phoenix. I wanted to die too when he committed suicide. His big-footed, see-beauty-in-everything drunken self still stumbles all over this low, dusty town. His sweet pop songs are on the radio, still.

My mother, born on Halloween, died too young not long ago, and she wasn't ready to go. She circulates. From the downtown Lawyer's Title building to old midtown bars to eastside card-game tables. I see her still in her green damask apron, in a dusty stream of depressing afternoon sunlight in our old kitchen on Kenyon Drive. She's looking straight down into my four-year-old eyes, her hand on my cheek, giving me access to the one world that's safe and dreamy, and I'm trying to articulate a sensation I was too young to grasp, but soon understood as the dull ache of inescapable melancholy. I swear she sometimes brushes hair off my forehead when I sleep, her hand smelling of rose water and cigarettes.

The ghost of my father, who two years ago died from cancer. He's everywhere. I'll hear his tenor sax ostinatos and gentle guitar runs, like he's next to me playing with a passion only he could get lost in. He could never be disconnected in that place, and I learned about musical transcendence from watching and listening to him. I think of gigs he did when I was a little boy—from living room rehearsals to the old Pioneer Hotel to the Westward Look Resort. This is my Missouri-born dad who, long before I was born (the fourth of five), brought television to Tucson at KOLD-TV, literally: He was Tucson's first TV cameraman, and he helped bring the nighttime sparkle and shimmer to those towers atop Mount Bigelow, and I feel him when I look up there, 8,000 feet up along the high ridge of the Catalina Mountains. He turned down job offers in bigger TV markets because Tucson was now in his blood, and because he was always searching for a kind of peacefulness, which he found. This was his Tucson.

I was hardly a fan of my pop when I was kid, and left home at a tender age. I later understood, of course, that he suffered (quietly) as much as anyone, if not more. After my parents divorced he found and married a whip-smart Texan who saw the kindness in him, and there was a shift. Through long conversations in the few years leading up to his death, I got a grasp of his fierce intelligence and empathy for the world. He'd answer personal questions—the kind that could never be asked—involving his life, loves, and fears. I saw him vulnerable. I confessed things that were far too shameful to otherwise admit out loud to anyone. He inspired and awed and I did not want him to go. He died a soldier of the gentle class.

Sometimes I spot him watering plants in front of his house where he where he died, around the corner from where I now live.

This city is crammed of memories and nostalgias that are my own and not my own—the bus route straight up Broadway, the sweet-screech orchestras of summer cicadas, the low-stakes quality of its place in the world. I returned here from Detroit — a busted, haunted city if ever there was one — because my heart was shattered. (I began to believe that all I had in life to show her was the worst that my world had to offer, until we were living in a house built on sadnesses and sorrows, like all my houses. She didn't deserve that.) Was already in state of untenable brokenness after my father died, a death that slowly became so cataclysmic it divided my history into the before and the after.

And it was like there was nothing else in the world for me to do, and nowhere to go, except, maybe, to Tucson, the one place I swore I'd never return. It's inviting when you’re broken, if you’re getting by on longing, like anything informed by potent boyhood memories and distance. All hallowed and womb-like. I was born here and there's family and all those chemistries beyond DNA and bloodlines. So I split Detroit late spring.

I live in a beautifully ragged neighborhood in the middle of town. It's full of chain-link and yucca fenced front yards of gravel and dirt and decorated with home-crafted sun gods or sun-rotted swings or Egyptian-looking cacti. The shut-in next door keeps abandoned trucks under a magnificent pine tree. I wanted in to this milieu, among ghosts of hard-working family men who built lives on a seemingly futile struggles. Like how my dad did. It inspires me more than any gentrified barrio or artist's enclave or blocks teeming with moneyed beardos riding fixed gears.

And Tucson's dusty mesquite and walled-in mountain safety—where overhead jets pierce the quietness, where stupid saguaros wave like they're always happy—reveals a place that will always be lost and found, and haunted. The first thing I remembered upon arriving here again was how the heavy desert scents after rains heal. It's autumn now and despite zero color change, it's so well done. The burnt light softer, the shadows taller, harsh edges at the end of the world gone.