This guy found the fountain of youth in bad art, killer psych and American road discoveries 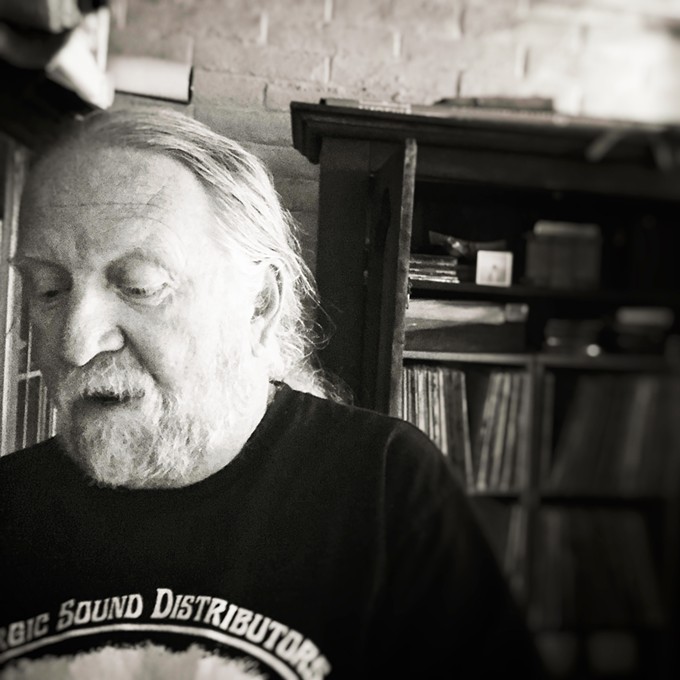 Steve Purdy in his home office
click to enlarge 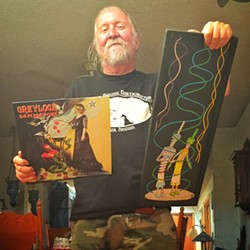 Brian Smith
Steve Purdy with his Greylock Mansion album cover and a trash-art piece he calls "The Transmission People."

This guy found the fountain of youth in bad art, killer psych and American road discoveries Steve Purdy pumps a clinched fist and rocks in his desk chair to a loud YouTube video of a Tucson epic-rock band called Ashbury. It's as if they're transmitting mystical currents. With outward, kid-like energy, he shouts, "These guys are huge in Europe and no one knows who the hell they are in Tucson." He points out the guitar heroics of Randy Davis, a dude who looks straight out of Jethro Tull circa '74: "Just look at him! Just listen to him!" One needn’t be an Ashbury fan of to understand their brand of sonic truth, so persuasive is Purdy's energy.

It's funny because Purdy's a ringer for your old stoner uncle who still talks fondly of, say, Quicksilver Messenger Service, Ken Kesey and Peter Max. He looks like pre-liver-transplant Gregg Allman: Tender blue eyes, which can stubbornly take hold of your own when he talks, a bit of a gut, and long, gray-yellow hair slicked back into a ponytail, and a matching beard. But the 68-year-old Steve Purdy is beautiful, and here’s why: When he gets going he's a charming raconteur with all the eye-sparking, air-guitar-playing passion of a 19-year-old music nerd living in his parent's garage. He's also a mad collector of gloriously bad thrift-store art, and proprietor of a rising boutique reissue record label that mostly specializes in unsung, vintage psychedelic bands.

With his record label and art collecting it's like he's excavating bones that shaped his boyhood, and when the conversation shifts from Ashbury to an idea of eternal youth, and his recent high-school reunion, which he didn't attend, Purdy says, unambiguously, "I see guys my age and I'm shocked because they're just so old. It's terrible."

The digging keeps him young. This married father of three grown children offhandedly calls himself the "world's greatest digger," and if someone were to ever compile a list of such, maybe Purdy would make the Top 10.

At least once a year he travels the country mining and discovering pop-culture gold, and can talkendlessly about scouring radio station attics in Illinois, garages in Montana and living rooms in Gallup, New Mexico. For example, he recently unearthed an unreleased album by a super-obscure early '80s Detroit punk band called The Gerbils. He dug the master tapes out of an El Paso garage. Another time, by sifting through a collection of 70,000 45s that belonged to a retired radio DJ, he found a garage-rock holy grail, a '68 single on Stanco Records by a forgotten band called the Graveyard Five, one of less than 10 in existence, worth thousands. The 45 was boxed away in 1953 Dodge van (an old mobile X-ray vehicle) that had been parked for decades amongst giant weeds in this DJ's backyard. (Purdy managed to track down the rights holder to the songs and he reissued the 45 on his label.)

Purdy's home office on Tucson's east side could be a bedroom belonging to that kid nerd—a simplified extension of his mirthful psyche. Dusty, palely lit and smelling of old record jackets and incense, it's crammed with collectable records, vintage rock posters he pulled off telephone poles in the '60s, thrift-store discoveries dirt-shoveled into open boxes, and extraordinary amateur art, which ranges from what could be described as demented landscapes and acid-trip fantasies. Purdy lifts one purple-hued piece from a stack and it depicts an alien-looking bird-boy wielding a skateboard, which he cleverly calls, "Tony's Hawk." It's one of hundreds and hundreds he has collected, puntastically named, and shown at gallery shows.

Since 2012, Purdy has co-curated three showings of his collected art, unearthed in thrift stores, swap meets and dumpsters, in Tucson and around the country. The shows, called "Tales of the Trash," play to enthusiastic crowds in Tucson and Bisbee, and he's taken on a show partner in trash-art collector Mark Bloom. They create swag for their gigs, including posters, T-shirts, magnets and postcards of some of the art. "We sold a bunch of it," Purdy says, "and I had no intention to make money. 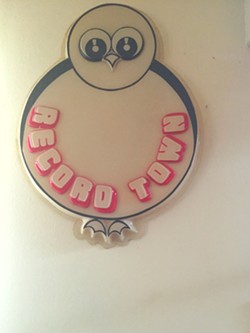 In fact, Purdy's been a devoted collector of records and things for 40 years, an obsession that shifted into a business of selling vinyl. That led to Purdy starting his record label, Lysergic Sound Distributors (L.S.D.), about nine years ago. Purdy runs L.S.D. with assistance from his son Trent, who's an accomplished bass player and an archivist at the University of Arizona library. Trent might be chip off the old block. "He got a masters in archiving," dad says, "so he's not fucking around." L.S.D. has so far released five, limited-edition LPs, one EP and a single, selling more than 10,000 pieces internationally. To vinyl fetishists, reissue hounds and pysch freaks, Purdy's doing god's work.

One of Purdy's "discoveries" was Tucson band Ashbury, whose story is similar to Detroit folk legend Rodriquez. See, Ashbury quietly, and almost mythically, amassed a huge, overseas following on the strength of their long-forgotten, self-released 1983 album, Endless Skies. The album's now considered a stone classic in European hard rock circles, some metal critics agreeing that it's one of the best albums ever recorded. The band, led by brothers Rob and Randy Davis, didn't know of their overseas popularity until a few collectors began trying to locate them in earnest.

Purdy fell in love with Endless Skies in '08, discoved the band had an uncommonly huge (and growing) fanbase "screaming for a copies" of their original vinyl album, which had been bootlegged myriad times on cassette, CD and vinyl in Europe, Japan and Canada. He couldn't believe Ashbury was from Tucson, and he couldn't find anything out about them. Through a chance connection at a local recording studio, Purdy found the two brothers living in a Tucson trailer park.

Ashbury couldn't get arrested in Tucson, not now, and not when they released their album in 1983. And this band likely wouldn't be headlining European festivals in front of thousands if not for Purdy. The brothers tell me they were already aware, and shocked, of their growing overseas popularity, and they had signed a deal to get their album legitimately reissued. But they really had no intention of putting the band back together. Purdy, and Tucson's musical man for all seasons, Al Perry, helped persuade the bros to reform Ashbury. It paid off. The brothers now support themselves solely on their music.

"Steve, and Al Perry, helped us a lot in other ways, too,” Ashbury singer Rob Davis says. "And right now we have offers on the table to play from every country in Europe except Luxemburg."
Another angle to this bizarre little yarn: the siblings now play acoustic sets at Tucson eateries, covering songs by Eagles, James Taylor and others, calling themselves as Davis Brothers/Ashbury.
Purdy grew up in "deep" southern Illinois with "the craziest fuckers ever. Nothing back there but cornfields, oilfields, hillbillies and bikers—real bikers." He cut his musical teeth as a lead singer in a couple of bands. Dad was a straight-arrow school administrator who "wasn't crazy about me playing music is the late '60s." Mom was a singer who had recorded a few records (78s) in her day and was a little more accepting of her boy’s musical inclinations. But Purdy stayed in school and graduated from Kentucky's Murray State University, did grad work in accounting and finance, and soon honed his entrepreneurial skills on side ventures, like a video store and a poster and t-shirt company.

But, he adds, if not for his wife he would've been dead “years ago.” He declines to elaborate. Instead he chuckles that he didn't always look like “Greg Allman. I wore a suit and shaved. Had to. I had three kids. I was vice president of a commercial bank in Illinois before I moved to Tucson 30 years ago. I wound up owning two insurance companies here, including an Allstate agency, which I sold. You've got to put your kids first. And it worked."

The house Purdy shares with the lovely and accommodating Arlene (they've been married 40 years) is filled with folk art, plants, settled-in couches and chairs. There are three cats and a long-haired Chihuahua named Nimi who never barks and whose feet make no sound when she moves, like a dog ghost. Purdy tours the storage areas—the bedrooms that once housed their kids—and they're stuffed with more records, found objects and bad art. He shows off items that'll end up hanging at a forthcoming "Trash" show, or sold on a website, or released on his label, such as the cover art of a forthcoming LP by should've-been-giant, late-'60s Tucson psych band Greylock Mansion.

Box of L.S.D. reels.
Because vinyl pressing plants are now overrun with orders, the self-titled Greylock LP, which consists of single sides and unreleased songs, has been delayed. But Purdy is patient. It took him three years to even get permission from Greylock leader/singer Merl Reagle, who died in August, to release the tunes. Yes, that's the same Merl Reagle famous for his crossword puzzles, and who was portrayed as himself on an episode of The Simpsons.

Purdy spins Greylock on his office turntable and the guitars burst through the speakers sounding like dull hacksaw blades across pipes, and organs swirl heavenward, like The Doors, but heavier. It really is glorious, hard to believe the band was an obscure teenaged combo from Tucson. Purdy’s all kid nerd now, arms flailing, commanding I listen to this “insane” vocal and that “god-like” rhythm. It's a cosmic libretto where Purdy loves to live, a beautiful place that's discomfiting at first. It’s where no one ever grows old, but they do get more wrinkly.
click to enlarge 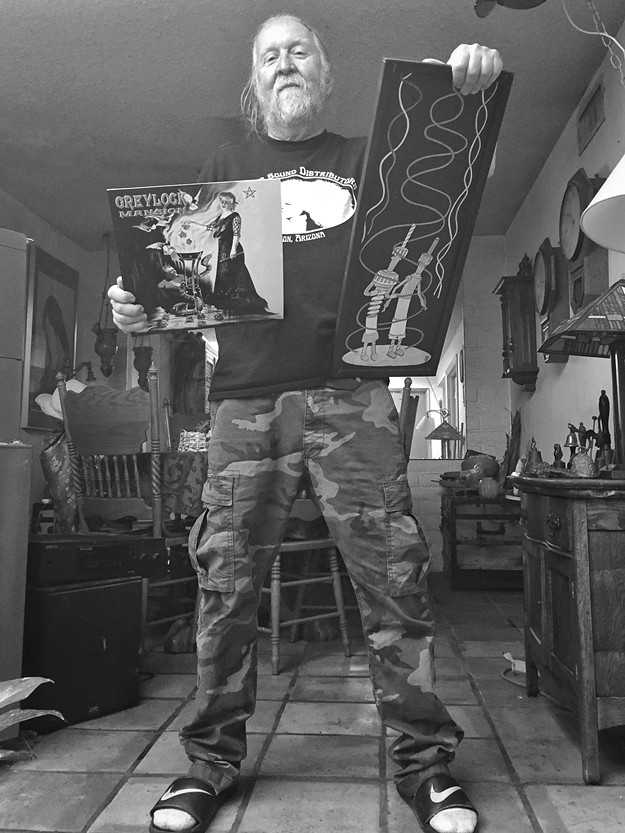 Steve Purdy with his Greylock Mansion album cover and a trash-art piece he calls "The Transmission People."

For more info on Steve Purdy's trash art collection, go to talesfromthetrash.com. For his record label and vinyl store, go to lsdsounds.com.