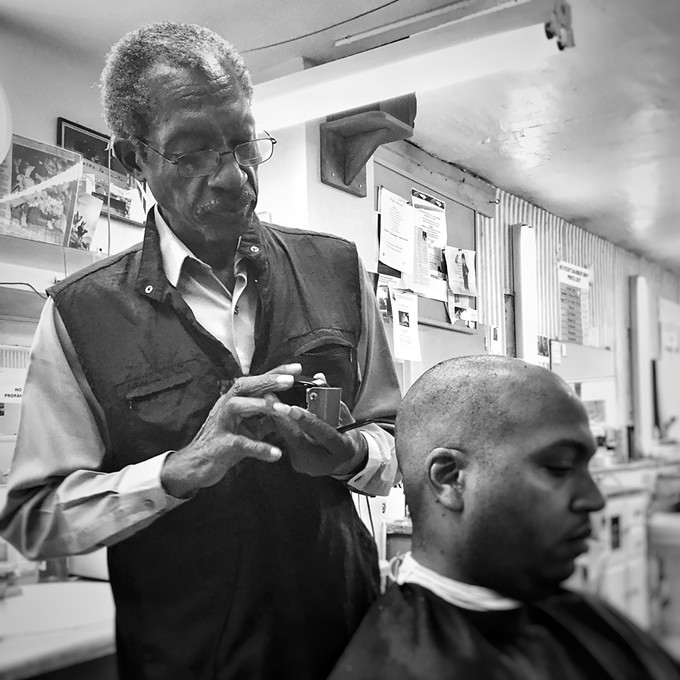 Whenever Johnelle Hunter swings his arms behind his back, shifting his electric clipper from one hand to the other, it's like a well-rehearsed soft-shoe worthy of some 1960's Motown Revue stage, such is the swift, graceful movement of his arms, hands and legs. A knee lifts, and then the other, as he sidesteps over the clipper's power cable, completing a quarter-turn.

He's built like a member of The Temptations too—long-limbed with narrow-shoulders—but you can somehow imagine his powerful yet slender fingers, with those impeccably manicured nails, cupping the top of a human head and lifting it straight up off of a neck. In a pressed uniform of khaki slacks and matching button-down shirt and russet leather shoes, he's as put-together as old David Ruffin, complete with specs and tight graying curls. His is an area of outdated style that never goes out of style. You just can't fake this kind of real.

This gent’s on his feet all day. No mean feat considering he hits 80 in December, and that an infection took his right-foot big toe decades ago. The loss not only informs his movements to a degree, but makes it even more challenging to negotiate the 20 or so heads he sees on any given workday.

It's the last day of summer and Hunter is trimming the close-cropped hair of Ryan Clowser, a University of Arizona physics major, and former high school football star from Sierra Vista. Two customers are seated on waiting chairs near the entrance.
Without query, Clowser comments on Hunter's work: "He gives the best haircut I've ever had." Then he says, "It's also really cheap here."

Yes, it's Clowser's second-ever visit to Hunter's, and he's not about to say anything disparaging about the guy holding his head hostage with a straight razor. Still, it's hard to argue with Clowser. Anyway, an "adult" haircut here sets you back all of 10 bucks, and Hunter can't remember when he last raised the price. It's been years.


And that's not surprising. In the context of a world of infinite consumer choices based on vanity, Hunter's small, homespun barbershop could be—or is—from a land time has all but erased. Striped paper graces the south wall above four barber chairs, mirrors and fabulous clusters of haircutter accouterments, sprays and ephemera. There's a mid-'70s Pepsi vending machine where a soda costs 50 cents (the machine recently sputtered—Hunter's waiting on the repairman), a few placards that emphatically read "No profanity!" and scattered about are magazines that suggests a dude-heavy customer base: Men's Journal, Sports Illustrated, Outdoor, etc.


"Oh, we do get women," Hunter says, tossing out a number that's quickly calculated by the folks in the shop to be about three percent of his total customer base. Notable regulars over the years have included ex pro-football players such as Ron Gardin, and former Tucson Vice Mayor Charles Ford, as well as a colorful assortment of preachers, lawyers, and politicians

The barber pole that protrudes from the non-descript olive-green façade outside is so hard to spot from the street it's almost secretive, like it might actually represent bloodletting and tooth extraction as it did in the Middle Ages. There's no exterior sign that let’s anyone know this place is Hunter's Barber Shop, or that it's called anything at all. But Hunter has all the consumer action he and a couple of barbers (including his son Lamar, a physical education teacher employed here Saturdays) can handle, and the shop thrives on throwback street cred and word-of-mouth (social media? Heaven forefend). To him, the internet is some newfangled technology that has little to do with, nor could it ever enhance, the kind of human interaction he trades on in his work.

Though he's been at this North Stone Avenue location near downtown for 26 years (the shop was housed in central Tucson before that), the place feels steeped in a tradition of a million crewcuts belonging to men who only know each other's first names, who wear the same aftershave workday after workday, and who aren't so vain as to calculate to impress others. It's also a tradition that began fading years ago to the kind of moneyed folk who move in to neighborhoods like these, displace its inhabitants and overtake damn near everything. But it's a tradition that symbolized Hunter's independence from an even older idea, one that involved taking orders from higher ups.

He talks of his life as he trims, shaves and cuts, and he's so nerve-calmingly spoken, with a hint of a Southern inflection, that one must strain to hear him at times.

He's been cutting hair for more than 60 years, but not always for a living. He grew up in northern Louisiana, experienced ugly southern racism firsthand. He and his six brothers (there were no sisters) attended segregated schools and his granddad was a sharecropper who had 24 sons and daughters from two marriages, and "maybe some others."

"So your grandfather was a stud," chimes in one waiting customer.

"He was, for real," Hunter laughs. He pauses. Shrugs gently, and says, "Those were different times."

Hunter's dad owned an 80-acre farm. “We lived off crops and the animals we raised," he says. “It just wasn't easy to make a living on a farm that small. Dad had to sell the farm but we never went hungry."

The family moved straight to this cowboy hicktown from Louisiana in 1951, after two of his brothers, both military men, had relocated here in the '40s. (Even before that, his tuberculosis-suffering aunt had moved here for her health.)

He and his brothers sang, having grown up immersed in gospel music and spirituals. They formed a vocal gospel group called The Silver Wings when Hunter was still knee high. Old group recordings reveal a persuasive, non-secular sound built on complex harmonies that'd do The Temptations proud. The brothers never released a record but they performed in Tucson churches and schools in the '50s, and later.

Hunter's dad was a minister too and pastored his own church in Nogales, Arizona, and later, the Morning Star Missionary Baptist Church in Tucson (where Hunter is a deacon and sings in the choir.)

Hunter graduated from Tucson High in ’55. After a yearlong run in the Marine Reserves, he joined the Air Force, staying about four years. (He tells funny stories of setting up a barber shop in a supply room at South Carolina’s Shaw Air Force Base in the late '50s.) American Airlines hired him next, as a baggage handler, then ticket agent, and he lasted 28 years (retired in ’87). In that time he married twice, raised eight children, and opened his Hunter's Barber Shop, but he can’t remember the exact date, but "sometime in the 1960s." He’d opened a barbeque joint (using old family recipes) alongside the barbershop, but it soon shuttered. Two other jobs proved too much.

Hunter's hands soothe and Clowser's eyelids get heavy. He returns the clipper to its holster, one of a half-dozen neatly arranged and hanging from the counter, and chooses a slightly smaller one. He slips in a fresh blade, fires it up, and ambidextrously alternates hands, going for the sideburns and a trim of the sturdy hairline. Minutes later he reaches for a spray bottle of mystery elixir, and mists Closwer's hair while working his fingers into the scalp. Then he lifts an air hose and blows trimmings from Clowser's head, neck and throat.

Between clients Hunter produces a weathered obituary, which he keeps in a drawer at his cutting station. It shows his grandmother's sister died in 1972. She was 127 years old. Yes, 127 years old. Many in Hunter's family lived long: His grandfather died at 112, two of his uncles lived to 108 and 109. His dad made it to 98.

He talks about losing a son. He'd rather not revisit the circumstances but says his boy died in the mid-'90s and was 30 years old. He thinks of his son every day.

Hunter peppers sentences with half-invisible truths, turns of hushed insights born of wisdom earned from aging with certain grace, understanding there is no perfunctory order to things. He brackets subjects like “racism” and “loss” and “murder” in terms of acceptance or forgiveness.
"It's the only way the world can work," he says.

Hunter sings and hums as he works to songs streaming through the shop's little stereo speakers. New-country Toby Keith or old soul Bill Withers or a traditional gospel number performed by Hezekiah Walker. Doesn’t matter. He knows the words.

How long does Hunter see himself running the shop?

He scrunches his face, surprises with room-owning guffaw, and responds vaguely with "Oh ... a few more years or so. Or more.

Cameron Purdie, 40-ish, has been a Hunter customer since he was a teen. He settles into the chair and Hunter shakes open the barber cape and fastens it at the back of Purdie's neck. No words are spoken. No need. The barber knows Purdie's needs, and he's soon humming quietly to Al Green while applying white shaving cream to a side of Purdie's buzzed head. The afternoon is coming down, the long melancholy shadows on Stone Avenue, and everything that's important is happening right now, right here inside Hunter's Barber Shop.