A thing of hate 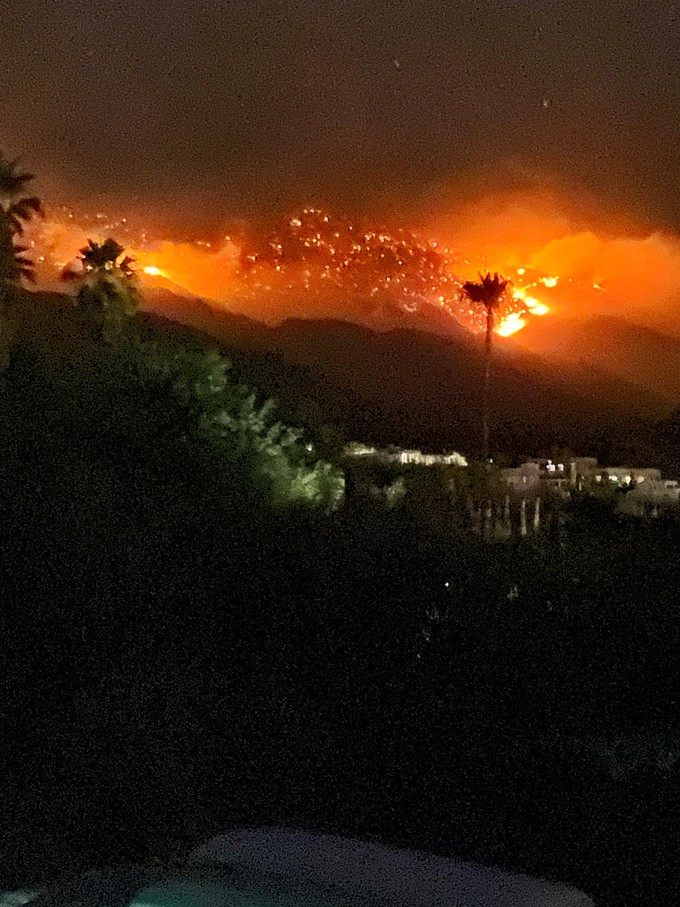 The sun falls and the cloud turns dark against the sky, unfurling off the southern slope of the Santa Catalina Mountains. Some evil invading the northeastern part of the city. The helicopters are gone from above now but the buzzsaw harmonics of cicadas remain and I let the black smoke turn into a plague of locusts.

The strange stomp and crush of something large. I hear her before I see her, that shock of the untamed, wild, and my heart surges: A dazed bighorn sheep strides across our yard, the cacti, snake nests and palo verde. She is several feet in front of me, the first I've ever seen in person. Her elegance defeated; she's hungry, scared, lost, another sad reminder of things gone horribly wrong. How only certain types and colors of creatures in our world are marked for love.

The blaze is a threat and like any clever antagonist disguises itself. At night it is strangely beautiful and intimate; drifting cinders as rotating stars, the flames feverish spirits set free. But it feels like we are a target. What it is to be a person of color in 2020, still, or a homeless person. Fire is hate and it gains momentum on idiot wind.

We were told to be packed and ready to evacuate as the fire rages on a ridge above our house. A ridge in a range that served as a geographic pull my entire life, wherever I was, where the many empty pieces of my life are cradled and soothed, a virtual safety net. The range my father motored down on the cold January morning I was born, hauling ass from those glittering red towers. A range upon which O'odhams once found refuge. A ridge where Apaches stood lookout for invading Spaniards, one of whom, a Jesuit missionary, named the range itself after the brutalized and beheaded virgin Saint Catherine of Alexandria, one of the Fourteen Holy Helpers. She is the patron saint of unmarried women and the namesake of the Catherine Wheel, a bone-shattering torture device used in public execution through the Middle Ages. Medieval hagiographies claim the device blew apart when she touched it. The Catherine Wheel is a firework now, creates a spectacular ring of flame, sparks fly in all directions.

The following morning is one of those hot ones where metallic light makes everything look toasted and dead in Tucson, and the sparks catch wind on the cliffs to the north. I drive over to a Red Cross evacuation center set up at Sahuaro High School. The same school I lasted a year and a half in, just another in a string of failed custodies of self. The school hasn't changed, still boxy, friendless and sad.

They are surrounded by trophies and photos of dozens of notable Sahuaro faces, mostly white and smiling. It is like a period movie, this place, and I am filled with that same sense of timeless mediocrity I felt when I attended years ago, a mostly all-white public school teaching whitewashed Christian things 70 miles from the Mexican border.

The women sit behind a table, bored and waiting. They are waiting to do good. They are waiting to help others who might be in need because of the fire of hate. It has been days and no one has turned up here for help, not from the inferno on Mount Lemmon or from the devastating Spanish Trail apartment blaze on Tucson's south side. I am not in need but wondered if some were, ready to employ the hearts of these women.

The Manhattan-born Ellin Ruffner, a retired mental health pro and Tucsonan after too many northeastern winters. Barbara Whitehead, an ex-CPA and Virginian down to her dialect. They sit behind a table staffed with COVID-19 masks, sign-in sheets, disinfectants and information. They temperature check anyone seeking help. There is food and water in the gym behind them. They met each other a few days ago and are now friends, talking homemade masks and how they will soon eat lunch together. They say they will do anything Red Cross asks them to do. They are always on call.

Ruffner, who was born during WWII, began volunteering to help the disenfranchised when Katrina hit Louisiana. She has seen floods and fires and blood in various parts of the country, all manner of wretched things. She tells me she attended university in a different time, her schooling was free. She gives back mostly out of a sense of duty and benevolence. Whitehead and Ruffner can't stand to see suffering of any kind. They say as much in the quiet minutes.

Ruffner's affect slides into the formal when she says, "Our mission in the Red Cross is to be here for everybody." She accents the word "everybody." We live in a time when such words need to be accented, when a person must go even slightly out of their way to show judgment is not tolerated.

I return home and taste the burning forest inside our house. My wife moved our two children to an affordable, COVID-safe hotel to keep their throat and lungs clear. They are red-eyed and coughing and haven't been able to sleep. Our neighbor loaded up his pickup and drove off. That night in our own bed, sleep will not come down, though the fire might, it crams my bathroom window, a mile up that sacred hill in the Coronado National Forest, "taunting us" as our 6-year-old Reece says. A song hit repeat in my head, Dave Alvin singing "4th of July": On the stairs I smoke a cigarette alone/The Mexican kids are shooting fireworks below ...

I wonder if our house, our forever lucky charm of a nest, will burn to the ground. "Even if it does," says my more-evolved wife—a woman who eternally sees beyond the immediate, always armed with the bigger connotations—"fire is rebirth. It burns the old, leaves the ground more fertile." If it is happening now, near the Fourth of July, she adds, it only makes sense.

The fire will be fought, and the fire will die. The hate will die. The ashes will settle, some on my head, and something good must rise. Set out your Catherine Wheel or crack the sky and say fuck the tyrants and bullies, the power of human exchanges will soon shift from those who hate onto those who love.

Turn on Dave Alvin: So dry your tears and baby, walk outside, It's the Fourth of July.