All Hail the Circle K

I walk up and see this guy in line with no face. I mean it is concave, a sinkhole where his nose should be, and pinprick eyes inside scar tissue. Tufts of stringy hair pad the back of his head. Carries himself like some prisoner; downcast stare, back straight, strange dignity. His presence gives the interior a drama reserved for severe car accidents or falls from great heights.

He pays the cashier with coins and pushes through the smudged doors, a straw connecting his malformed mouth to a Polar Pop. He vanishes around the corner on foot into Tucson darkness, an alley between chainlink fences and yapping dogs.

Once the initial fright recedes, my heart stings for him. How he braves the outdoors only to be met with shocked and dumbfuck stares. How he finds relief in the glow of this nighttime Circle K. How the old tour T-shirt he wears could be his favorite. I imagine he has favorite things. I can't imagine his agonies.

I meet a lonely foster-raised guy there fighting internal joneses. Has it bad. A thick snake tightens and relaxes around his neck like a visual metaphor. Later he drains himself of horrors, including the one about watching his old man commit suicide by putting his head on the tracks and letting the train decapitate him. I write about him.

I meet a gentle soul there hurtin' to get by with five buzz-cut boys, the wife and the trailer. He panhandles when his landscaping business won't sustain the family bills. I write about him too.

Way back I played in a Tucson punk band called The Pills and this very Circle K on Tucson Boulevard sold us underage teens beer, even after 1 a.m. I say God bless them for the kindness of medicine to quell tender-aged panics. No one died, and no one got hurt.

Way back further my dad forbade Circle Ks, thought them unseemly for us kids.

Later the Circle K becomes ecstasy in repetition. When you're busted with no wheels, Circle K saves. I swear on the one near my old casita, near downtown Phoenix off Van Buren. Its peculiar smell of mouthwash and day-old rotisserie dogs, and how it made its financial case on malt liquor, smokes and shitty donuts. How it made my financial case. As an alcoholic, half the joy of getting hammered, half of the addiction itself, was the walk to the K to procure the stuff. My walk past low houses filled of undocumented residents and their penchant for celebration; the glorious booming cumbia and the lighted altars. The harried street urchins and liar white drug dealers who'd zigzag across Van Buren. The construction site work-a-days and the sharp-kneed streetwalkers with broken stomachs who skulked into the place—I was nothing compared them, they worked harder than anyone. I once wrote about a security guard who manned that K.

Beyond the vagueness of smokes and beer, there was its light. 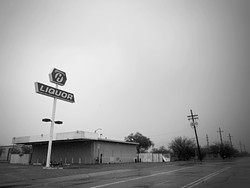 Back to the location on Tucson Boulevard. Classic Tucson, classic Circle K. Whorls of folk, egalitarian by numbers, all colors and shapes, enormous and small. Beer-swollen bellies and 12-packs in line by 1 p.m. Sun-ripened site bosses smelling of vinegar and onions with fountain Cokes and Doritos. Young mothers counting change for half pints and packs of Crowns. High-school stoners in for peach blunt wraps, Donut Gems and Yoo-hoo. Bothered white-collars—fuckin' Starbucks is too packed, man—slum it at the coffee kiosk but request Red Sea at the register.

It gets robbed. I walked up several times just after. Doors locked. Cops. The clerks get used to it. One lanky redheaded counter kid told me he got robbed the night before. The robberies are more than just beer runs—patron walks in, grabs a twelver from the cooler and bolts—but guns are involved. It's more desperation than cash. They'd stepped up security, a uniformed guy walks around. 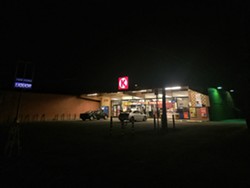 This location is classic Circle K because it's the afterburn of '70s and '80s Tucson, now relegated to memory. Its fetching mid-century design, the lifting straight roof, the looming glass front, sharp angles, external beams. It's said Ralph Haver, the old man of Arizona modernist expressions, had a hand in the original design. Haver is the Phoenix guy who introduced mid-century modern and P.A.T.'s (Perfect Arizona Homes), those lovely postwar tract houses found in parts of Tucson (east-central) with sweet-sleek horizontals and low-slung gables. (The now-legend Haver altered Phoenix and Tucson aesthetics for the better, designing banks, theaters, and hotels, even the old Kon Tiki motel on Van Buren, which is now long gone.) 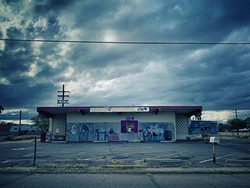 Most of the classic-designed Ks suffered. The late '80s brought new corporate schemes that left so many of the beautiful modern-designed K shells for reclamation. New, larger boxy Ks were erected spitting distance from the old ones, only now congestion-creators on busy street corners. Yet the repurposing created a welcome respite for odd-duck mom-and-pops. Such as the blue-trimmed Desert Taekwondo on Golf Links west of Wilmot Road. The red and yellow Quik Pawn further east close to Pantano. There's the Simons Physical Therapy over near Camino Seco, and the buoyantly garish Happy Rooster Cafe on South Sarnoff. The sapphire and burgundy colored Wheels and Tires Plus decorates the southwest corner of 29th Street and Swan, its front of pretty disrepair. Sometimes it's death. One old K south of Ft. Lowell on Country Club is now the grim Murphy's Guns and Gunsmithing, the glorious glass façade bricked in, mostly. There's an abandoned one on East Grant west of Swan, hued a suitable slate gray. The forlorn Super H liquor store on west Ruthrauff is doubly sad—a dead Circle K and a dead liquor store, ready for the wrecking ball. There are others similarly fated.

I grew up on Tucson's east side believing as absolutes, as sure as Saltines and chicken noodle soup, that the only buildings to last are liquor stores and Circle Ks. But happiness is forever followed by letdown, and such overlooked outposts of city life are left to flounder and die. As onlookers we get to witness that decline and decay, feel the ground disappear and shift under our feet, maybe get lucky and discover some beauty in the rot, before it's gone. Before the inevitable descent into what passes for progress, into chicken-wire-and-spit complexes and instant-ghetto condos fueled on befuddled city ordinances and a new wave of aspirational white elites whose profit goals shun everything about Tucson, including its Mexican and Native American heritages.

C'mon, let's all drink to an even cheaper, uglier version of Tempe, Arizona. 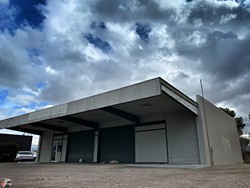 Well, I no longer drink. But the addictions fester inside. They are as pervasive as a June Tucson afternoon. Even the other part, the stroll to Circle K, is now about realizing there ain't nothin' lucky about it, that it is what it is and the elixir of night is really just a handful of coins. Hardly the kneejerk pursuit of sadness.

I see people step from the K armed with 12-packs and imagine they have disappeared someplace faraway. I wish hard on that feeling, long for it. How nice it would be to pop a cold beer from Circle K and guzzle it on my walk home. The day's first is best. I long for that stroll home on my low road with a rich sunset at my back, falling in love again with the gravel and weeds and cactus. Excited for the night in front of me, the rage against my inner machine gone for the time being.

The Circle K represents still the simplest joys, a piece of living as much as the addiction, and the longer it's gone the less the longing. But there's euphoric recall, that welcome return of wishful fiction of my future self. 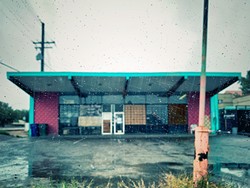 Now I watch my five-year-old sprint inside one of these expansive modern corner Circle Ks, loving all humanity, oblivious to addiction. I think of how my own dad wouldn't allow me inside a Circle K when I was five. This kid runs straight to the little rack of toys.

Brian Smith's collection of essays and stories, Tucson Salvage: Tales and Recollections of La Frontera, based on this column, is available now on Eyewear Press UK. Buy the collection in Tucson at Antigone Books, 411 N. Fourth Ave.