The Legend of Alvernon

Louie never shares a story of himself or anyone unless prodded. He shows no desire for Facebook or Twitter or Instagram or Snapchat. None of it. No self-reveal in an era when that's all people do. He doesn't say much and when he does the words stubbornly emerge as if dislodging from his throat. A guy seemingly without modest objectives, aspirations, or maybe a way to assert desires. It's a good bet his cellphone is never on.

But I first saw this a couple years ago: 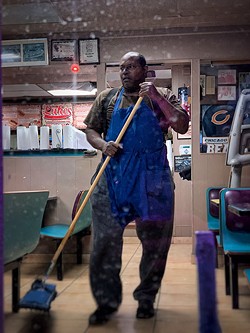 A large gentleman in a long blue apron carries free food into the old-man Chatterbox bar so the lonely bartender doesn't go hungry. Moves in and out of shadows, in and out of reality, like some alcoholic delirium. Wordless almost so no one notices. The Chatterbox bartender calls him "the legend of Alvernon" and relates of small kindnesses with other bartenders and the neighborhood homeless. Says Louis forever seems resigned to the presence of others like he'd rather be elsewhere. Says he's been working at Luke's for 30 years.

I'd seen him lumber along Alvernon south from 22nd Street. He works at the mom-and-pop drive-thru diner Luke's Italian Beef, which has occupied its spot next to The Chatterbox since the early 1980s. The place roars at lunchtime with chatty Border Patrol agents, firemen, cops and military folk from nearby Davis-Monthan Air Force Base. I've seen Louie inside Luke's, quiet and dutiful with a mop or handfuls of table leftovers or restaurant supplies for backroom shelves. A man who customers step around when trashing food wrappings and cups. No eye contact and he might as well be invisible.

Born Tyrone Hunter, Louie got fostered out young and became Tyrone Shepard. He hates Tyrone so call him Louie, his middle name.

Just another black man working his way down the street, white plastic store bag stretching from his hands. "Nowadays," he says, "times have changed." But it was worse in the 1990s. A black man in Tucson who didn't drive a car and who hoofed it regularly to Quik Mart or Circle K for beer or snacks, or to Fry's to read, say, kung fu magazines, got stopped by cops. It happened so often to Louie he nicknamed cops "fuckface."

Louie's head is acquainted with a few trunks of cop cars. Been cuffed and hauled off for "matching a description of bank-robbery suspect" or because he "matched the description of sexual predator" but he is neither a bank robber nor a sexual predator. Once a convenience store clerk ran out from his post behind the counter to inform cops Louie was one of their best customers so the cops would let Louie go. He got popped once years ago for purchasing 40 ouncers of Olde English, King Cobra and Mickey's for drinkers with no IDs. Debt paid in community-service hours.

Louie's few words are hard to decipher, thickened with a slight Boston drawl and maybe hints of something Southern. Says he was raised in a lakeside house outside Boston with his foster sisters. The family moved west and wound up in St. Johns in Northeastern Arizona where the Navajo and Fort Apache Indian Reservations almost touch. He attended school with Native Americans, whites, Hispanics. He ran track ("I was OK," he says), wrestled, and managed the St. Johns High School football team. He describes St. Johns as a good place to hang with friends but he came to Tucson for family. Before Luke's, Louie worked with a cousin at City Meats on 22nd Street.

His foster mother died in 2012. Other deaths in his family: His uncles Paul and Carl. His cousin Michael. His aunt Humpty. All gone.

He's not the best with dates and has trouble remembering how long he's actually been working at Luke's. He does remember walking across Alvernon Way one day years ago and someone from Luke's saying they needed a hand. Been there since. 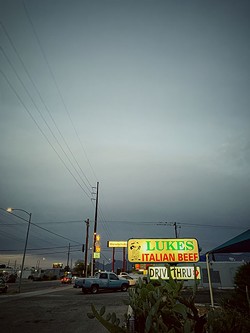 To learn of Louie, I go into Luke's Italian Beef and talk to the founder and owner of the long-running chain. Luke is a sturdy gray-haired man who has paid his dues on the land through a storied and loved chain of Chicago-style sandwich shops, this one featuring outdoor tables under a drive-in style canopy and a lighted street sign on Alvernon featuring a gangster in pin-stripes, wingtips and hat. Luke is friendly enough. He says, "Yeah, I've had Louie close to 30 years." I wait for him to say more.

Luke moves behind the counter and I stand there for several minutes. The place smells of meat, pith and peppers and I soon realize this wait could go on and on. He busies himself with other folks standing in line. I finally leave, telling Luke on my way out I'll phone him later. He nods. It's like why would anyone be interested in his Louie? I call later. The employee on the line talks enthusiastically of Louie, but doesn't know much about him. Says Louie "helps out with everything," but he doesn't cook. Louie will be in tomorrow, he says. "You should talk to him." I leave a message for Luke to return my call but he never does.

Louie isn't excited I call his sister Lucille, saying I'd just be bothering her and she'd be too busy and wouldn't want to talk about him. I find her mobile number anyway and call. There is no answer, not even a way to leave a message. It just rings and rings.

On this strip of Alvernon, Louie is a mystery, or, maybe, as the bartender said, a legend. The Merriam-Webster definition of legend is "an extremely famous or notorious person, especially in a particular field." By that definition Louie is no legend. Louie acknowledges in his way that he's any person tasked with the seemingly insurmountable job of simply getting through life.

It's a Monday, a Louie day off.

The inside of his hermetically sealed guest house off Country Club near Reid Park is an organized mess of VHS movies stacked high, clothes, a bed and kitchen area, a TV, filled of his life, and every time he turns around I imagine he bumps into himself. The burrow of a desert tortoise. His dormancy. Smells like Luke's too.

We go outside, find a place to sit. But Louie stands. We're in the backyard beside his guest house. He wears shorts, flip-flops, it's cold out but the noon sun begins to shine hard. There's a children's trampoline, some kid's toys, and the landlord's pet dog Lola circles, barks waning. Soon Louie's rubbing Lola's ear and head. "Last Thanksgiving," he says, "I fed her too much. And she threw up everything. Yeah, I felt really bad." His gentle laughter an afterthought.

I want to know about this mystery man of Alvernon Way, who's been walking the avenue forever, nearly stationary in his personal existence, and working at Luke's Italian Beef "cleaning and helping out" for years and years. He just looks at me. There's a black sphere on the bridge of his nose, a patch of darkened skin. He stands there like time and tomorrow and yesterday don't exist, and shouldn't exist. He'd stand there forever answering my stupid questions through his immobile stare if I needed him to because that's how he is, never offering up much of his interior, because nothing really matters. His impulses don't involve greed or self-promotion or a big free lunch somewhere or shots of whiskey or hitting trails in the desert or anything else. He does say his VCR is broken so now he's saving for a DVD/VCR combo and will probably find one at Bookmans. His movie-watching is limited.

I remember what that bartender told me about Louie being the "legend of Alvernon." Now I get it. See, I can't tell if he's slow or brilliant. He just is. He's a quiet and patient stay-at-home whose movements are defined by a work schedule yet he's cut loose from rhythms of ordinary life. Get him on the subject of women or a partner and only then he slightly smiles, and says, "I see what everybody goes through. I just don't want the hassle."

His foster mother Lucille Shepard taught him kindness. He says as much. It rankles Louie how Donald Trump has hurt women. All the school shootings too, and immigrant children separated from their mothers and how fucked up everything is. At least cops don't harass him anymore.

The homeless folks he's befriended and fed. He talks of one guy, an architect who lost his wife and daughter in a car accident, and then lost everything else, how his house is all boarded up nearby.

"He used to be fat," Louie says. "But he lost a lot of the weight because he just walks the streets here and there. Somehow this guy manages every day."

Another homeless guy used to sleep over behind The Chatterbox. Had a family "in a house near Sabino Canyon. But he just didn't want them anymore. People gave him food and clothes. One day I saw him all cleaned up on the street. He had court. Then he went to jail for something, I don't know what. And that was it."

His story stalls there. All he can add is, "people are people."

The people. The thousands Louie has seen hastily devour pure beef Chicago dogs and wash them down with fountain Cokes. The thousands motoring past in cars on Alvernon as he mops floors and cleans tables and windows. The hundreds broken and on foot, moving past the grim storage units to the south, the abandoned gas station across the street, or the Chatterbox on the other side. Louie himself on foot, a rare solitary black man out on Alvernon Road, and the countless times he has strolled home from Luke's Italian Beef through Reid Park as twilight slips away.


Brian Smith's collection of essays and stories, Tucson Salvage: Tales and Recollections of La Frontera, based on this column, is available now on Eyewear Press UK. Buy the collection in Tucson at Antigone Books, 411 N. Fourth Ave.