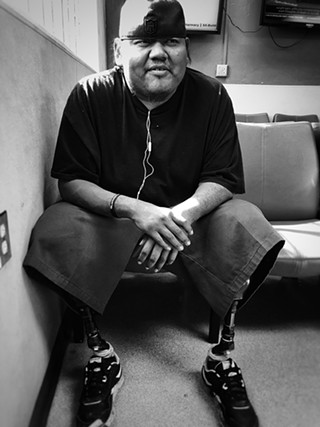 “Natives are strong people. I always told myself, ‘You’re native. You can get up. You should be proud of who you are. Hold your feathers high.’”

Ramon “Ray” Encinas lifts his shirt to reveal the scar where his little sister used needle-nose plyers to wrench the bullet free.

“The blood squirted out with the heartbeat,” he says, touching what looked like a smear of cookie dough on his gut, the scorched Benson Highway rolling past our window. “We call my little sister the ghetto nurse sometimes. She’s done patched a few people from gang activities.”

Ray had sold to another dope dealer’s people. And over near 10th Avenue and 29th Street, he turned and saw a flash. He began running. “Then I looked and,” he motions with his hand, “from here all the way down to my knees was blood.”

His “sister freaked out” and couldn’t sew the hole shut so Ray stuck gauze in it. He held on to it for two days before finally hitting the hospital.

He laughs. Jabs a finger to his belly. “My fat saved me.”

We pull in and park at Earth’s Dispensary. Ray climbs from the car and looms forward with robotic grace, in half-speed movements. He’s got a sweet script today, and is psyched to roll a blunt when he finally arrives home.

The dispensary smells of fine weed, that kind of pleasantry only afforded others. Or afforded Ray, who’s often crippled by physical pain. He sticks out too. In this drab, quasi-medical waiting area he’s imposing in a black tee, NFL cap, calf-length shorts, earbuds, Reeboks, tats. He’s big and tall and prosthetic legs help shape his posture.

This Native American son of a gangbanger mom and ex-Marine dad, both of whom died fairly young (2010 and 2008 respectively), lost his legs at the knees back in 2013. A toe scratch led to bone infection led to amputation—complications of diabetes.

“I should’ve been dead when I was 15,” he says. “I’ve been jumped, stabbed, shot. I was dropped on railroad tracks, broken ribs. Been to prison three times. Got shot in one of my legs before I lost it too. I was done.”

Chronic kidney disease gets this 34-year-old up at 4 a.m., three days weekly, for a trip to the dialysis center, where he sits plugged in to the blood filterer for four hours. The routine is more than two years old. Then he’s on the city bus to work, cooking lunches at Café 54. He’s been there about a month. Then it’s back on the bus, either home on the Southside or off to the San Xavier Health Center on the Tohono O'odham reservation for myriad ailments. A check-up later today focuses on the deep eight-inch tear on his inner elbow, an infected fistula from dialysis, which— aside from the swelling, pain and unsightly wound—limits the use of a hand.

A bum hand isn't good, because it's his art that keeps Ray rolling, that and the small group of graffiti artists who populate their own church called Open Space (openspacetucson.com). Headed by a kickass-named pastor, Lars Hammer, the Lutheran-based collective is, Ray says, "Bible with paint. An exploration of faith through art where no one judges you."

I first spotted Ray stepping off a city bus carrying a half-finished canvas. The work stood out, its colorful mashup of illustration, street whimsy and hints of Native American imagery. I actually followed him to a kidney disease center near downtown to ask to see it.

He told me he got into art when he watched his "older cousins, using pen and pencil make these giant Indian scenes." It saved his life.

And it doesn't matter to Ray where anyone stands on organized religions, he's been accumulating successes since meeting Hammer back in 2009. "I wanted to see what was out there beyond the streets of Tucson."

Ray is 100 percent Tohono O'odham, and his two sisters (and two younger adopted siblings) follow "all of our traditions" mixed with Christian ones. He shares this blend through Open Space. "I always think about being native. Natives are strong people. I always told myself, 'You're native. You can get up. You should be proud of who you are. Hold your feathers high.'"
But it took three stints in federal prisons to be reminded.

Ray acknowledges reality with an easygoing shrug, no self-flagellation or sneering. It is what it is. How he rolls. His stoicism dovetails Native American stereotypes—he preserves an enviable coolness, until you earn his trust, then mirth emerges and he goofs on himself often ("You're an Indian and you don't drink! What's wrong with you?"). Sometimes he disappears, even for a moment sitting in a car passenger seat, window down, or "with a backpack for days." To a quiet place "for strength," he tells me later, or, "I'm just tired as shit, ha ha ha ha. Yup."

The sun hangs above 12th Avenue, and Ray's squinting straight into it, telling how he spent nights bombing this town with spray cans, learning, honing graffiti skills. How he bounced through high schools so often he was finally asked to leave because he turned 21.

How he slung drugs all over Tucson, to survive. “I would go everywhere in Tucson. If you had the money, just tell me what Circle K to meet you at. I mostly drove around but didn't have no license. Work street corners is the fastest way to jail. So we'd rent a smoker, a legal car from other crackheads, give them like four pieces, or you would have them drive you around, and that's how it worked.”

We roll up to a dollar store on Oracle Road so he can load up on items for his girlfriend, who's in rehab for meth. The thoughtful, gentle way he selects the things she'd like. Brisk tea, Snickers, Reese's. He's flustered at the Doritos section because they don't have her flavor. He strolls the store aisles talking prison, and getting arrested on the reservation three times.

"First time I got popped with three $20 bags of crack and a gun, which is a lot to the tribe and the tribal police. They hate the drug thing. To them that's the worst thing you can do."

He was terrified of prison that first time. He thought, Somebody's gonna kill me. They're going to jump me. They're gonna rape me. Turns out it was nothing like the movies. “The only thing is, if you don't have self-respect, then you get your ass whooped. It's that simple."

The second time he got arrested hauling a truckload of undocumented immigrants. Third time he got popped leaving the reservation with more than 500 pounds of weed stuffed in a car.

We pull into the Wayward Winds Lodge on Miracle Mile, now a Gospel Rescue Mission, where Ray's girlfriend is in rehab. He retrieves the dollar store bags from the back seat and makes the drop. He returns five minutes later, face alight. "They let me see her—I got to see her. She wants to change her life. I'm all for that. I'm always there to help her.

As we ease the car on to Miracle Mile, he says, “I decided that my life was going to be about being a better person," he continues. "Either that or die."

He interrupts conversation to extol city beauties: An antiquated Harley on the road, a vintage El Camino in someone's gravel frontyard ("I would love to own that"), a sweetly distilled graffiti mural down on Drachman Street.

We all absorb certain ways of seeing the world, and maybe improve upon them after the chips are down. How to somehow exist with responsibilities, with warmth too, human or otherwise. A legless guy in a wheelchair pushes into a crosswalk on 12th Avenue, a slow defeated roll. Ray comments on that solitary, comfortless wheelchair life — the agonies of simple tasks and how the senses collect the worst of it, from avoiding car exhaust to finding a place to piss.

Losing his legs left him suicidal. His mother had been gone a couple years. Huge depression and homelessness lasted an entire year beginning at the end of 2013. He once tried to hang himself "but the rope snapped."

He wanted out of the chair, to at least create. "When I had legs, I'd go tagging or bombing all night," he says. "It was my whole life. The art. This wheelchair wouldn't let me."
Then he met a retired Marine, another Native, at physical therapy who'd lost his legs on duty overseas.

"He said that if I got up and walked, he'd give me his Purple Heart. A week later he passed away. I never got the Purple Heart. That's when I started walking.

Later in the day, Ray's leaning on a junked car in the chain-linked frontyard of the house he shares with his sibs. It's in the shadow of massive electrical towers, near I-19. He's surrounded by his younger step brother and sister, a couple of cousins and a trio of excited pit bulls. He's leafing through books of his art, talks of inspirations and reminisces.

"My mom was a gangbanger," he says. "She wore makeup to cover her tattoos. But when she took off all her makeup? She had the Mi Vida Loca dots, a cross on her forehead, one on her lip. And then the dots on her fingers — they meant putting in work for your gang. My mom was certified for reals. I never asked. [But] no matter how messed up you were, she'd always make sure you came inside and had something to eat. Friends, relatives, family members … We took care of her until her last day."

It's Thursday night and the Open Space meeting room is half-filled with folks from all walks — kids, adults. Like an AA meeting but youthful. Most are seated at long tables, painting. There's live music, one folkster offers acoustic renditions of Sound of Music chestnuts.

Church member Citizen Klown mans a table filled with paints and canvases, free to use, donations accepted. Klown's a skilled graffiti artist who's genuinely happy to be here.

"This is a place to paint and create," he says.

We talk about Ray. Klown hints that Ray's past sometimes returns to haunt him. "He doesn't see it," he shrugs. "He's been through a lot."

Ray learned much about painting from Klown. Were in the same graffiti crew, Lost Souls, LS. They've known each other for years and Ray looks up to him. They both slung drugs too, back in the day.

Tucson might still offer Ray the trashed husk of his former life. His old leftovers, out there on 12th Avenue. He can’t go back, so he says.

"Tucson may be a little butt-ass town,” he offers, watching a pair of spindly graffiti artists spray boards out back. "But I love it. I know where I come from." He waves his hand and laughs a little. "I only hope some other person will look at me and say, if he can do it, I can do it."

Some time passes, and he says, "Look, I'm still trying to learn how to stay up on my legs."

To see more of Ray Encinas' art, go to Art by Ray on Facebook.