Nam copters, WWII ambulances, and a goat with no name 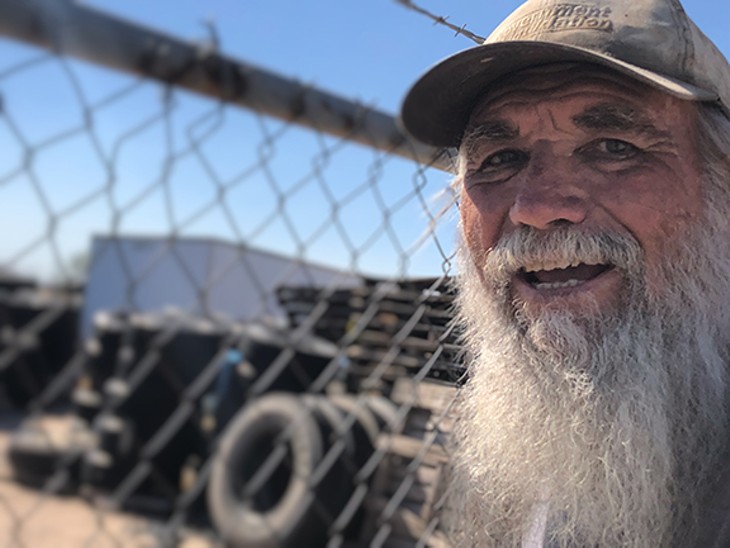 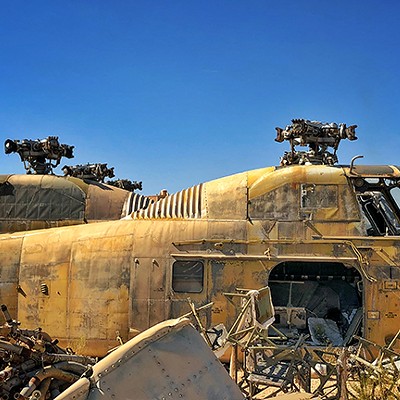 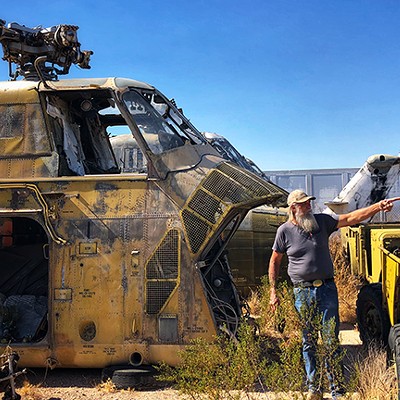 Jack Martin trundles his acres as if on a private mission, pointing out war beasts with excitable affection. Watch close, his joy unbundles slowly — it's like he doesn't want anyone to see how much he loves his machinery. Middle-schooler enthusiasm isn't easy on a 71-year-old. Even harder after 41 years of salvage business in Tucson.

"They only made these half-ton Dodge carryalls for one year," he says, staying in hasty stride. "This one here's a 650 Kawasaki retrofitted with a diesel engine, made in California. It's going to Russell Military Museum in Zion, Illinois. They only made 440 of them for the Marine Corps and they turned them into Davis Monthan for destruction — but they decided to sell five. Almost everything gets destroyed. It's such a waste."

His salvage yard, Jack's Gov't Surplus Trucks, qualifies as high art, a repository of organized chaos. The visual equivalent of a Stooges song, you might say, tonnage and frayed edges equally metallic, muscular and organic.

Thousands of machines resigned to peaceful, perfunctory order: A half-ton World War II ambulance shaped in the cheery curves of a '60s suburban milk truck, rusted and sun-defeated in a bed of vicious buffelgrass; several Nam helicopters decorated with Vietcong bullet holes, emasculated with guns and rotor blades removed; a dozen multifuel engines lifted "from five-ton M54 Vietnam cargo trucks" provide cast-iron cubbyholes for desert creatures and their feral-cat hunters. Hard to imagine these vehicles once announcing brutal hostilities to faraway worlds.
It's 15 acres on four lots that smell of old rubber and juniper, out in the dusted no-man's desert where I-10 nears Drexel Road. A land of junkyards, forgotten trailers and colossal, high-voltage transmission towers. The tone is set nearby—miles of skeletal wings and tails form eerie symmetries behind tall chainlink, ghosts on Davis Monthan airfields.

It's lonely, and the silent horsepower deafens, but Jack's voice cuts through, conveying data and facts and numbers on pretty much any tactical vehicle, jeep, gun trailer, helicopter or chock block or winch attachment or axel or tire in sight.

Ask to repeat information if he goes too fast. He will, slower now, easily calling things into being in a dry, sometimes off-character melodic voice. He may stop to pet his goat, the one with no name. Sometimes goat-with-no-name follows Jack like an obedient dog down creosote-shrouded paths, between machines.

Jack is owner, overseer, mechanic here. He looks the part: a mechanic's stoop in a gun-metal gray tee, retro Civil War "US" belt-buckle, a cap ringed with dried sweat and the words Government Liquidation. Shoulder-tickling gray biker hair and matching beard. Sun-sketched facial wrinkles and watery eyes. Cast him in a horror film as resident sage — a Grimm's Fairy Tale elder doling wisdom to teens before they're slaughtered.

We're on his main lot, the sales lot. An antiquated military jeep, which sits a good 20 feet up atop a long storage bunker, hauled over from Davis Monthan AFB, makes the place easy to spot from Drexel Road. Behind that, in the front, sit motors, forklifts and military Humvees, Mad Maxian ephemera, and several ramshackle structures housing a garage and attendant sheds for storage.
Today, Jack's sole employee, his son Josh — a mechanic here part-time — works on a pair of ongoing restoration projects, military Blazers for a “lieutenant colonel from Northern California,” and an out-of-state judge. Such work is the crux of Jack's business — the sales and restoration of military trucks for use by average joes, suburban alphas and collectors.

Jack then leads up the path to one of his seven helicopters, a foreboding, house-tall Choctaw whose nose is shaped like the pregnant belly of a T Rex. This particular copter belonged to Air America, operated in war-time Laos and Viet Nam, got replaced by a Huey. Says Jack: "They started producing these in 1961, it has all the parts. I had 138 of them, and it took us three months to move them all. [William] Westmoreland's signature is on some of the paperwork." (He purchased them years ago from Bob's Airpark in Tucson, which is long gone.)

Scrapyards couldn’t use them because they're mostly magnesium, almost worthless. So Jack sold most to a renter on one of his lots, who went broke in the 2008 recession.

"He was going to retrofit 99 of them," Jack says. "But he sold them as scrap. This chubby Vietnamese guy bought them and had them smunched up and shipped back to Viet Nam. They were made into sparklers and firecrackers, because they're made out of magnesium. It was a real shame."

Between talk of firecrackers produced from war machines, and that some of his collection has starred in film (Kevin Costner's The Postman, for example), Jack talks about one of his daughters who lost herself in meth, who's fighting her way back to her own daughter, Juliana. Jack raises that granddaughter now, with the help of a nanny. He talks of Juliana's school performances, at-home shenanigans and age-old parental worries of daughter raising. His granddaughter breathes new life into him, as he breathes new life into machines. He says as much.

This Tucson-born son of a local milkman fell in love with army trucks after he saw the National Guard on practice runs. His love of wheeled machinery deepened when he began fixing things as a kid. "I had some tools. I put dual wheels on my Little Red Wagon.”

"But I was a junker from day one," he adds. "My dad used to take me to the dump at I-10 and Grant. He'd be dumping stuff out of the jeep and I'd be putting things back in."

Jack's first car was a used 1950 Ford Business Coupe, "bought it for 20 bucks and drove it home." After graduating high school (in '64 from then-brand-new Palo Verde High), Jack worked for the railroad in Washington State. Drafted at 19, and stationed in Germany, he became a Radio Relay and Carrier Repairman, and was in charge of trucks. "We had 13 trucks in my platoon. Got awards and stuff for taking care of those trucks." Then his appendix burst, peritonitis came on, and he nearly died. "I love Germany, I cried when we left."

He returned to Tucson, hired on at Tucson Gas & Electric (now TEP) for seven years. He lived free, in exchange for nightwatchman work, at a local truck salvage place. He saved his dough, purchased a few trucks and, soon, several acres off I-10. Met his wife Linda and plopped a doublewide on the property. Had their first child, Josh, while opening his business in late 1977. The couple had three more children, two of whom found careers in the Army, and they raised Linda's daughter from a previous union.

The lot grew steadily, and at one point employed five fulltime “until the economy tanked. Employees are like adopted children, you can't just hire and fire because business is bad. They have families ... It's a huge responsibility."

Jack's wife died in 2011 after a bout with pneumonia, and he can't hide from the sadness. "I'd look at those dating sites, but I love my wife so much I can't do it." He still lives in their home, with Juliana, on seven acres out near east Saguaro National Park.

We climb into Jack's dusty-cabbed Dodge flatbed and roll over to one of his multi-acre storage lots, less than a mile away. This one's filled with walls of monster tires pulled off everything from six-ton trucks to 50,000-pound tank haulers. Tire walls form mazes where one can get lost. Jack hunts down a tire for another grey beard in a SUV. The customer could be his brother. After 20 minutes of hunting they find what they're after, the sale goes down.

Later, Jack lifts himself up and peers into the driver window of a 4x4 tactical vehicle — one of countless classic Department of Defense sell-me-downs for civilian use. "This one only has 3,000 miles on it," he says, "cost taxpayers $104,000! But it's old, from 1997, I think. You don't want to send our guys to Afghanistan in something this old."

Jack purchased this one, and so many like it, cheap, but won't reveal numbers. "I still get good deals," he says. One can drive this diesel beast off the lot for 15K. Hundreds of military trucks sit ready for sale to anyone. A buyer could roll away in a military GMC truck for $7,500, restored to dependability — a better deal than Craigslist or eBay.

His business is word-of-mouth, so he's fairly selective to whom he sells. He won't, for example, let an antiquated truck go for scrap metal. Maybe it's idealism left over from his military days, or maybe he only wants to preserve what's what, but, "If someone comes and wants to build a rat rod, I say out, out, out."

He's not the biggest fan of artists either: "They want everything free."

In the old days, Jack would stock up on trucks at military auctions all over the Southwest and Southern California. But now the government and buddy contractors find their civilian buyers through online auctions.

And if ever a brand was forever flush with excess killing hardware, it's the U.S. military. The surplus is huge, and big business. The U.S. is the largest exporter of arms in the world. (The New York Times reported the U.S. made $42 billion last year selling aircraft, ships, armored vehicles, and missiles to foreign governments.)

The government's so-called 1033 program (which Trump insanely kicked into high gear) guarantees law enforcement agencies access to heavily armored and combat-ready machines from the Department of Defense. The military's harmless leftovers wind up in places like Jack's Gov't Surplus Trucks, or get destroyed.

"There's a place, HVF West, a contractor in Tucson, where you ought to see all the Humvees and trucks and bulldozers getting destroyed ... I'm over here trying to put them together and they're over there cutting up brand new ones. It's such a waste.

"The internet has ruined everything," Jack continues. "Online auctions have made it easier for anyone to buy and sell, but the prices have risen steeply. My sources are my biggest competition." He cautions, "You buy online, you get as-is."

Jack gets by the old-fashioned way, and he knows it. Sweat and labor, and a certain kind of love. "Here, we're selling service," he says. "We get the trucks running. If it doesn't work you bring it back."

A few days later rain falls on the dead-quiet sales lot. It's near dark, and Jack's in his tiny, fluorescent-lit office. Floor-to-ceiling: piles of documents and tools and heaving filing cabinets. Dozens of yellowed Polaroids stapled to one wall show trucks he's owned, a few featuring his sunny-faced boys in grins or bright jackets, posed on one of Dad's old things. Decades of spider-webs and dust mortared to the window kind of reflect who this guy is. Like what's set shouldn't be messed with.

In a moment he'll get up to let his dog Lucky out to roam the lot for the night.
"Ever get lonely?" I ask as we step into rainy dark.

He clears his throat. "I stay busy here so I don't have the time for that."

Talk quickly shifts like distraction to auto manufacturing. How after five years new cars are junk and junked, rarely parted out and wholly disposable. His acres are filled with things designed to withstand elements — the years, the rust, the wars. Machinery that's been around long enough — some pieces are among a few remaining on earth — that it's only outshone by the desert sun.
"I don't have any money," he says, flatly. "The property taxes are so high I have to use every inch of 15 acres. I bought everything on payments. Never had money, only trucks."