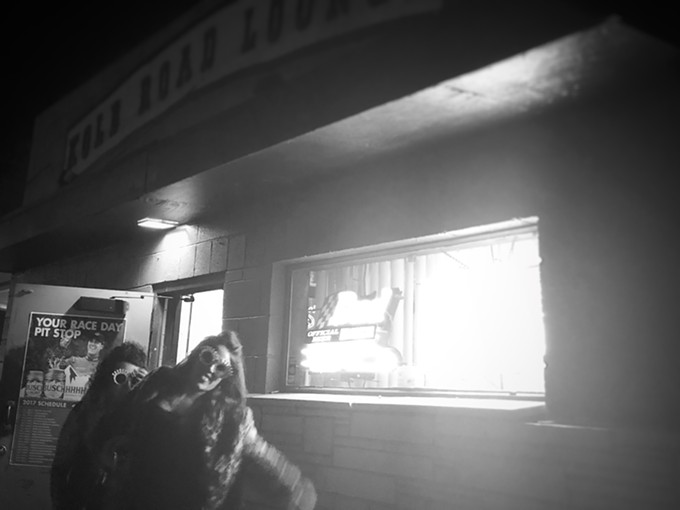 The landfill fire southeast of Tucson rages and a ghostly pall falls over the city's eastside. The smoke forms keyhole arches around street lights, hazes out tattoo shop neon and pawnshop signage. Air tastes like pennies. The low, heavy moon floats in and out of sight. On the last night of 2017, this strangely deserted part of Tucson has inherited the melancholic limbo of a failing mill town.

A raging garbage fire is the sweetest of ugly year-end political metaphors. It reeks, it's in our systems and we don't want it.

Inside the Kolb Road Lounge, things all blur, one into another. Time stops.

A trio of women in a crush of short skirts, leopard print, fishnets and masquerade masks slow move to Russ' "Write You Up," and stay there for Rhianna's "Talk That Talk." They dance close, between a pool table and the bar, mouth the words, and laugh. They're likely not lovers, it's more enviable friendship, their cackles censure the loneliness of others here.

Soon, at 11:15 p.m., after a brisk round of goodbye hugs—the heavy ones for Eddie the bartender—the women are gone. There's a party elsewhere.

Ray Austin's out back smoking His laugh is memorable, grizzled. "Women are always invited to parties," he says. "Men don't get invited to shit. We don't. It's why we're here."

The Lounge has the agreeable feel of voluntary confinement. Its interior is sustained, updated through the years—corrugated steel, concrete floors and beer neon, a pair of pool tables and several flat-screens—to avert decay. No mean feat; the great old lounge has been here since Kolb Road was dirt. Only recently was the hitching post out front removed. Yes, the hitching post for horses. The free-standing cinderblock near 22nd Street stands tough between a Circle K-turned-Enterprise car rental place and a paved alley that leads to the old Tucson Bowl.

It's more profound to be one of the disregarded, or forgotten, or pitied. I always think that. And always in the old bars. When hopeful dreams and images of my future no longer bring any relief, I'm left with reflections of my true self, refracting off bar interiors—the bottles, the glass, the mirrors, the drink, the grime, the faces of others. That's when I arrive at some painful truth. Everybody knows this secret here, consciously or unconsciously. That's the certain beauty of this or any (vanishing) corner bar—at least those safe from cocktail trends and hipster schemes and wrecking balls. I'm not drunk anymore, but the reflections are the same. There's little not to love here.

"I can't tell you how many nights I've come in and it's just me and Eddie the bartender sitting here," says Al Langlois. Al occupies a stool, and including me and bartender Eddie, there's five folks here. Down 15 from an hour ago. It's getting closer to midnight.

Al's a retired cabbie from New Hampshire, mid-40s, moved here 12 years ago to be near his parents. He's retired because he was badly hurt on the job. He was driving his Crown Vic cop-car cab ("with a push guard") when a drunk broadsided him. It's disability now; there's an interbody cage installed in his lower back. Spinal fusion, he says. But something went wrong, a doctor screwed up. Al's been to so many doctors he's lost count.

Chronic back pain keeps him down, though you'd never know from his perpetual grin. "It hurts just to get up from the stool." Al lives a few doors down and walks here.

He's off the painkillers; it's a necessary respite, too easy to get strung out. The insurance settlement he received was "minor," and he'd rather be on the job. Al was a lifer.

He began driving a cab at 16, night shifts in Manchester, New Hampshire. A small-town cabbie. "A town with eight bars in a one-mile stretch." He hauled folks in and out of the burbs, had many regular customers. Tells of one couple who hired him to drive them around so they could fuck in his back seat, instructing him to observe through the rearview. They paid him $500. He once saw a guy's head "get chopped off by a trailer" in a car crash.

How does he occupy himself daily now?

Carl Edwin Soller II has the inviting countenance of a comedian—Adam Sandler meets Jim Gaffigan. He's remarkably buoyant in orange Bermuda shorts. Could brighten up any damn party if only because some of his sentences end with a Gomer Pyle "gall-lee."

He talks all about his dad, fallen U.S. Forest Service firefighter Carl Soller Sr. He died on the job when this 46-year-old Carl was all of 16 months old. "My father was the baddest motherfucker up there," he says. "If you go up to Mount Lemmon you'll learn about my dad. There's a plaque. They named a helicopter landing pad after him at the top of Mount Lemmon. My grandmother, Jean Soller, fought for that."

Carl lives a walk away in the neighborhood he grew up in. He details cars now. He's made a kind of career of bartending infamous Tucson watering holes—Margarita Bay, Boondocks, The Mint, Temptations, even this place "like five years ago."

He goes lengths to ensure it's understood that he in no way compares to his pop. "Dad was heroic," he says. "I haven't done shit."

As he lurches sideways out of the bar, I'm reminded of that song whose title I can't place about how it's not easy being the son of Superman.

About bartender Eddie. He's a youngish Latino with a kind face. He's worked here three years. He remembers patrons well, except the name of one suited gent with gray hair and dark shades. He's a KRL regular, Eddie tells me. "Stays to himself, orders a drink or two" of top-shelf stuff, and splits. Always in the suit and shades. I wanted to meet him solely because his mannered dignity suggested a cross of Boogie Nights-era Burt Reynolds and Bryan Ferry, maybe creepy. He vanished before I had the chance.

This other guy on the bar is Ray Austin. He's been hitting Kolb Road Lounge since '77.

"Fuck," he says, nodding at the bartender, "Eddie probably wasn't even born yet."

Despite the hard duskiness of a movie biker, Ray's got soft eyes, a sweet disposition and a full, slow voice. He defected to Tucson in '75, just after high school, from South Pittsburg, Tennessee. Besides being home to the National Cornbread Festival, South Pittsburg birthed the oldest family owned cookware company in the states, the mighty Lodge Cast Iron. Iron's in Ray's blood. He's got 40 years on the iron-working job, and still going.

Ray erected parts of Tucson with his bare hands, and rattles off a list of the work he's done. It's long. "I helped build I-19, shitloads at the UA, bridge at Houghton and Broadway ..."

He once worked on Lee Marvin's house, up Campbell Avenue, below Sunrise.

"I saw him pick up a quart of vodka every morning when I'd go to his house ..."

Ray put the rebar in Paul McCartney's swimming pool. "I'll say that was 1981 or '82; I was the only worker there. My old lady got a whole wardrobe to meet him and he never showed up. But I did see him on horseback once."

Al moves gently off his stool and coins in Gun N' Roses on the juke, "Welcome to the Jungle." "My era," he grins, sliding back onto the stool, "was the '80s."

Ray's "uncle and cousin got rich off pharmaceuticals. They sold property to Disney in Casa Grande for the new Disneyland." The pharmacy wing at UA is also named after them, the Pharmacy-Pulido Center.

Kiss' tender '70s ballad "Beth" plays and both Al and Ray sing along softly, into their beers. Antiquated, maudlin arena rock but with a tender universal sadness. Both Ray and Al's heads drop the moment the strings heavily kick in. Grown men, born of a certain age, about to weep on a bar.

Ray continues. He grew up on a 52-acre farm, is son to a Korean War vet, and he's half Italian, half Cherokee. "My dad's dad was full Cherokee." There's no genealogy on that side of his family, but stories are there. Ray's great grandfather could strike matches with a bullwhip.

He's got hillfolk friends still, the moonshine at home to prove it. Talks to his mother regularly. He's married to the same woman all these years but shrugs like a living George Jones song. He has two daughters, expects a granddaughter in July, and he talks of them with renewed authority and tenderness. And music too. Says the greatest music on earth came from shit towns in South Tennessee. He's right.

It's down to four of us now. Eddie's pacing behind the bar. Ray reaches his hand over his shoulder and fingers his back, then he extends the same hand in front of him over the bar, outstretching his oversized fingers. Could easily be the fingers of a bare-knuckle fighter. He says, "arthritis, carpal tunnel ... we get it all, man."

On the TV above the bar, Britney Spears gyrates fake softcore and ersatz song on ABC's New Year's Rockin' Eve: "You're toxic and I love you," she goes. It's icy dreck as vain as 2017 politics. No one cares now.

Eddie moves from behind the bar and closes the front door because the temperature is dropping, which did nothing to temper the eerie pall on Kolb Road. It's just after midnight. Feels like midnight from the inside out. Not one of us say anything about the new year, or the catastrophe of '17, or any of it. Time stops here.

Al breaks some silence. "The colder it gets, the less the smoke rises." He pauses a long moment, adds, "It's like fog now, only weirder."