Portrait of a quiet man who long gazes at moments 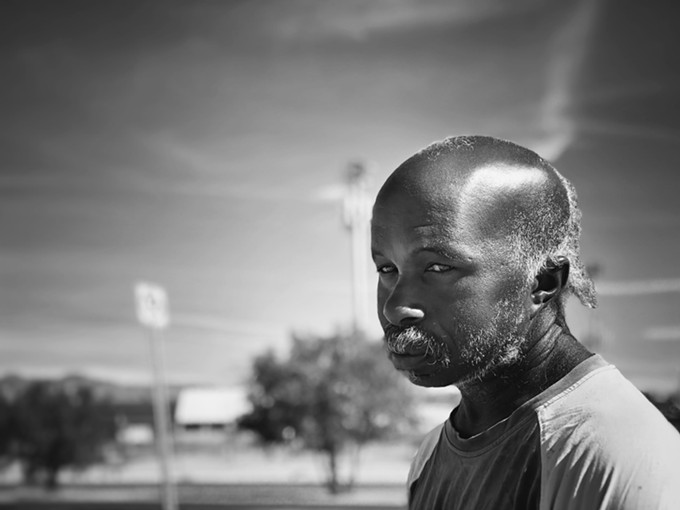 Alone in the world and full dark is falling soon, and he listens to the stupid cars and trucks pass by, their low rumble, the severity and austerity. He leans in toward the traffic from just behind the curb, motionless and expressionless. The tortured pistons, the sonic crush of city buses, the precise whir of hybrids, all create a hypnotic drone. Birds chirp counterpoint during lulls. Melody is everywhere, and he gets it, for hours.

The wind rustles eucalyptus leaves and palm tree fronds, lifts his sighs away, to somewhere far beyond that one barking dog. The wind runs through the thinning platinum hair on the sides and back of his shiny black head. It moves the dirty gray fleece draped over his straight-backed, soft-in-the-middle body. He tastes dust, car oil, exhaust.

His dark eyes stay mostly motionless too, as he sees obdurate cityscape of wire and poles, bowed chain-link and high cinderblock fences, sometimes a roadside altar to the dead. He's set back from the road on Swan between Fifth and Broadway, in front of the Poet's Corner neighborhood, where it's easy to imagine all the dreams, hopes and money long ago pumped into this area. He searches for beauty on streets designed solely for automobile comfort. It can't be easy.

At first glance he appears feral, frightening, but easily frightened too, long dismissed an autistic pity case. After some time, I became obsessed with him. It's like he's exuding a secret, like he's communicating with the dead. Maybe he's beaming himself elsewhere. Or maybe he's contemplating some deep-seated hurt involving dead loved ones who maybe once attended Rincon High School, which he stands and faces, motionless for hours.

(I've seen him many times, in the same exact spot—different week, different time. Sometimes I'd spot him a mile away, still leaning forward slightly, and completely motionless.)

I brought him lunch a few times. I'd hoped to hear his story or learn what his secret could be. I'd edged around his silence for hours, getting little from him, but understanding more, and I took his silence as a respectful way of saying he'd rather be by himself. It felt rude and insensitive to hang around him long, like pestering a praying man. But watching him inspires dreaming. One day he got to talking, saying very little, but enough. It was tentative, free of inflection, and never with eye contact.

His name is Arthur Conlee.

I ask, "Do you have brothers or sisters?"

"They're on the other side of Arizona."

A good while passes. He stands facing away from me but into traffic. Cars whiz by and it's humiliating. Then he reluctantly offers up a comment, the only one in the hours I've spent with him that's not a response to a question.

"That's what I do. Ever since I can remember."

More times passes. He adds, "I go with the flow."

I reach my hand to shake his and he jerks his right arm back and his entire body turns away. He's embarrassed, shamed. Me too, for thinking it strange. He lives mostly on his inside. I get that, and it makes me more of a fan of him. I feel a sudden, boundless tenderness for him. 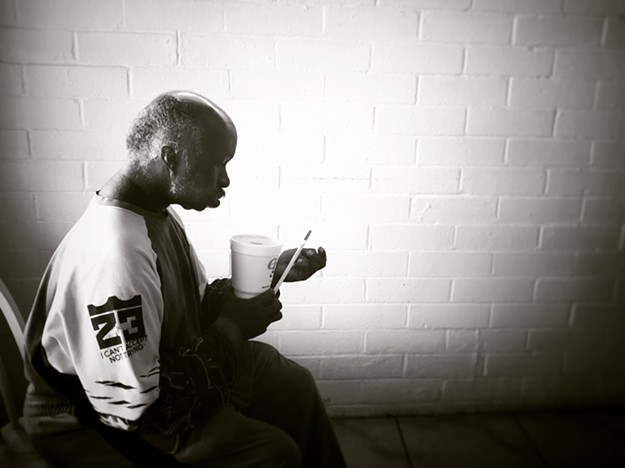 
When I arrive, Arthur's sitting on a dinette chair placed in the middle of the floor, waiting. He's wearing the same clothes as the previous day; they hang off him like the unloved garb of a big brother's hand-me-downs.

He lives in a boxy but spacious two-bedroom guesthouse, clean and sparse. It's situated behind a halfway house near Fifth Street and Swan Road.

Place smells earthy, of sparingly showered bodies and cooked carbs. An episode of Bonanza flickers on a TV atop the refrigerator. Someone in another room stirs restless under a brown blanket in a bed. A closed door hides the second bedroom. A pink, hand-scrawled placard above the kitchen sink reads: SHOWER: Tuesday, Thursday, Saturday.

Arthur is hardly living on juice and Dumpster swag. No, somebody works hard to keep the dust and dirt and dread out of the place. ("It's a pretty nice home," he says. "Some days there's really something to talk about.")

I tracked down Ruth Dempsey, whose company, Dempsey's Adult Care Homes, owns the residence in which Arthur resides, as well as a number of other such places in Tucson. She explains that Arthur lives on Social Security benefits, and a monthly government stipend of $60 for toiletries. A caretaker arrives daily to cook and clean for the three folks living there, reminds them to shower.

"We help people with low incomes," Dempsey says. She herself was raised an army brat in Mexico, moved to Tucson to train as a nurse.

People come and go from the homes and care that Dempsey's company provides. She has helped to look after Arthur for 15 years, after he arrived in one of her homes from a Tucson health center. She's emotionally invested in his wellbeing, and talks about him with personalized detail, avoiding the programmed syntax of a jaded caretaker. There's love, laughter and concern. In that 15 years, she says, they've attempted to locate Arthur's family but "there was no one." And he suffers from haphephobia, a fear of human touch.

"His sickness keeps him away from people," she continues. She says Arthur hasn't really changed in 15 years. "He just likes to walk, and stand. It's what he does."

She doesn't attempt to explain his behavior. Arthur just is. He's on time for his meals, and for bed sleep and rest.

"He doesn't try to make friends, really," she continues. "I only had one complaint about him in all these years. A neighbor said he was standing in front of his house." She laughs, "I told Arthur, 'you can't stand right in front of people's houses.' And now he doesn't."

"And the other day I watched a woman give him popcorn." 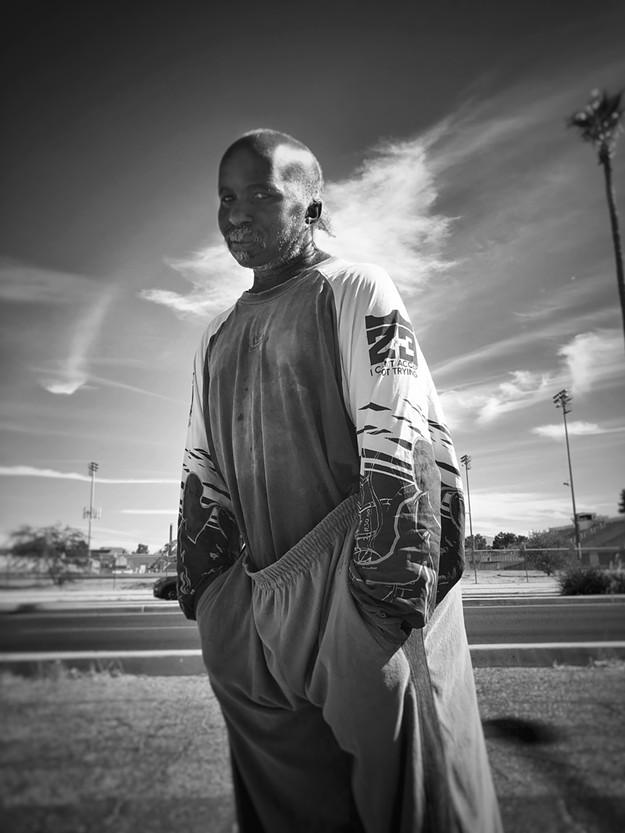 Brian Smith
Arthur Conlee out on Swan Road, Tucson.
Back out on the street, processions of cars shimmer in sad November afternoon half-gloom. Arthur's leaning slightly into all of it from the side street along Swan Road. He's not addicted to a screen assigned to a satellite hanging far above the earth. He lives in the moment, addicted to his surroundings—the shadows growing taller, the sounds from front yards and alleys and ditches, and kids trudging home late from Rincon High School. He's really watching time, as some might say, from the edge of lunacy, which is I always figured, the very best vantage. I say he has better sight and listening skills than most anyone I've ever met.

Who gazes that hard anymore? I try to always do that. It's a form of meditation. So I'm watching a man stand completely still, watching time move for long stretches, trying to see what he sees.

"Everything changes," he says, "in every second that goes by. That's beautiful. But it's really nice. This is basically what I do. I look around. Just outside looking at the scenery."

I catch confused expressions on faces in passing cars, probably just like mine the first time I saw him. One approaches and slows, eases slightly over toward the curb. Its driver hits the horn and a tubby white blob of a face with small eyes nudges out from the passenger window and shouts disturbing racist horseshit at Arthur, and speeds off.

But Arthur doesn't budge. He doesn't seem to care, doesn't even appear self-conscious. But I know he hears it.

He shakes his head. Then he turns and moves cautiously up the gravel-strewn street, hands in pockets, looking down ahead of his feet. He stops and turns to face the street again, leans in almost enough to fall over forward, and stands tree-still. A half hour passes and he adjusts his stance, but only slightly.