How a rug-weaving master found a little grace after surviving war, depression 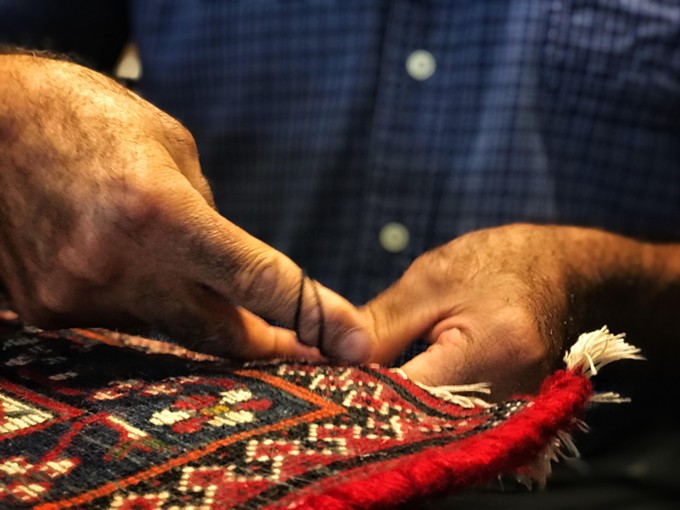 After some minutes, the rug weaver rests. He shifts the 70-year-old fabric, a fetching cotton-wool Bijar accented in midnight blues and catholic reds, to continue stitching its edge. He talks meaning in the monotony of his work, and his Farsi-shaded English is spoken so softly it necessitates a closer lean to listen.

"Sometimes you really go somewhere, you go into the design. Sometimes it's 40 knots, sometimes it's a thousand knots." He lingers on that. His fingers move to his inner rhythms and it's so hypnotic I'm lulled into thoughtlessness. Time feels arbitrary here.
"Ninety percent or more is repetition."

He flips a corner of the rug to reveal the underside and its flattened random patterns of whorls and flowers. "There's a thousand different colorings," he says. "One side dark, the other side light." Another rest. "The challenge is matching the color. Especially the parts that are worn."

When the light side shows decades of wear and part of the soul of the fabric, of the million footsteps of people he'll never know, he'll match that color, too. His restorations rarely leave traces.

The perfectionism, unyielding patience. A relaxed relentlessness to a dying art and tradition. His monotony has meaning, he says, "like meditation." It’s his vispanna. And Sinatra’s lilt compliments the rug weaver's grace, and both efforts seem anything but possible.

He’s Ali Shahinpour and he’s perched on a low chair at big table in the Asian Trade Rug Company showroom. Organized piles of rugs keep him cornered — carpets from Pakistan, China, Afghanistan, and his Iranian homeland, and Turkish, Persian, Indian, French, Navajo, contemporary and so on. Hundreds of rare antiques, flickers of art and the archeological. Practically every damn thing in here is beautiful.

On the floor beside him sits a mad, tangled mountain of vintage silk, wool and cotton yarn, in soothing Middle Eastern colors. Mostly reusable threads, discarded from years of work, now essential to his color matching and repairs. Behind him hangs a large rug in pastel browns, taupe and red. A lovely replica of an antique he weaved himself. This chair, this table, this mad psychedelic mountain of yarn: his workstation, five days a week.

The slight forever grin suggests nothing can break his reserve. His bright dark eyes don't waver from mine when he converses. He fingers continue to move, though, and he explains lots in few words: The beauty of worn-in rugs, and silk sometimes makes the best foundation. How knots per square inch can vary from country to country, tribe to tribe. How tribal rugs from southern Iran have multi-hued selvages. He talks asymmetrical knots versus symmetrical, and how wool weft threads aren't twisted. Talks knot counts, quality of yarns and dyes and the sweet blends perfected hundreds of years ago. How so many Persian rugs came over to the states in the 1920s, and before, "to be aged." How the market for antique rugs, especially those from the Middle East, has taken a commercial dive after 911.

He’s 55 years old too. He’d tutored with a master rug weaver in Tehran and learned everything — from weaving and repairing to cleaning and wholesaling. An artisan trade, passed down from generations. This after surviving the Iranian Revolution of '79, after Saddam Hussein's invasion.

This son of military parents came up in Dezful, Iran, the sight of the biggest tank battle of the Iran-Iraqi war, and home to one of Iran's largest air force bases. "I could see the Iraqi pilot's faces— they would fly so low." He was a teenager in 1980 when Iraq invaded Iran, already weakened by its own revolution.

He relates Saddam Hussein terrors, the sickness and horrors of genocide. "Hussein blew up anything. He blew up hospitals and ancient mosques and architecture, and whole cities, and used chemical weapons, on women and children.” The shock of seeing his blood-soaked father roll by in an ambulance. The shock of an Iraqi missile flattening his home, his family members huddled in the basement, terrified as the world exploded down in fire and dust and rubble above and around them. He endured the loss of friends and classmates, destroyed by bullets and bombs. During the invasion, the Iranian government gave families firearms for protection. "[The Iraqi Army] was bullying everyone. Saddam was not human.” His family (parents, sister and two brothers) survived.
Ali did a stint in the Iranian Army in the early ’80s. His voice, now full and slow, loses things in translation. (If only I understood Farsi.) He touches his cheek. Says, "this scar here," and straightens up. Touches his abdomen, "Right here, too." He reaches around his back. "And here." War wounds, bomb shrapnel, and he nearly died. "My back pain was very bad," he says. "I needed help to stand up. I had so much pain. Doctors in Iran didn't know what was wrong. That's when I got out."

An old Ali classmate facilitated an invite to a London-based doctor. It wasn't easy getting out of war-torn Iran. He tells of a risky exploit involving a "bicycle guy" in Abu Dhabi. Ali calls him "Nasir," which, in Arabic, loosely translates to "helper." Nasir helped Ali out of the country. He arrived in London broke, with a slight grasp of English. But he had the "friend who took care of everything." The doctor discovered Ali’s pain was, at that point, long after the wounds had healed. Said they were in his head.

Ali married an American woman during his year in London. She worked real estate, and the couple moved to Utah, where she'd worked before. He arrived stateside with several rugs and attempted to set up shop. But the demand for exotic rugs in Salt Lake City was minimal. Things looked bleak.
“It wasn't good for me there," he says, shrugging, fingers working.

One day Ali and his wife were moving into a new place and someone broke into their U-Haul in a mall parking lot. The couple were in the store. They lost anything of value including a rug that didn't belong to Ali. He only had it for repair, his only work. "I was responsible for it," he says. "That was 28 years ago and the rug was worth $16,500. That changed everything. That's when I moved alone to L.A."

He had an Iranian friend in Los Angeles who invited him to stay at his suburban home. He went to work for the outfit whose rug had been stolen from the U-Haul. That was his start in California — a recent immigrant who went to work for acquaintances and had to quickly learn the Los Angeles rug market, which was centered around La Cienega and Melrose. As long as you have a reputation you can earn a living in rugs, Ali says. Designers and dealers from all over the country began calling him. He rented a storefront and lived inside, and his wife moved out from Utah.

He was selling, repairing, even making his own. He opened House of Rugs, supporting, at one point, 26 employees. He trained each person Profits grew. He tells of a German guy dropping $1.5 million on rugs in one day. One customer purchased rugs and built his home around them. The couple had twin children and purchased a comfortable house in the Glendale suburb of Los Angeles.

Then the marriage collapsed. "It was better for the kids if we weren't together," Ali says.
The day after his divorce finalized, Ali turned on himself. A festering depression deepened. The next day he was in the psychiatric hospital, and spent a month inside.

"I'm glad I didn't do anything to myself. But I was on a list that said I couldn't buy a gun for five years."

Asian Trade co-owner Kasra Massarat, who'd been sending Ali rug repair work through the years from Tucson, offered Ali a job. That was 14 years ago. He's been in Tucson since, a total reset. Left his business behind and his ex-wife kept everything back in Los Angeles. The afterburn of a California life.

His children visit summers and Christmas (now each are 19 and in college, the daughter on a computer science full-ride at Boston University. His son studies in Louisiana).

Ali and store owners Massarat and Tomas Almazan regard each other with respect, a kind of love. Ali met an Iranian woman here seven years ago. They married. He's done well enough to build his own house on the Northwest side. This rug weaver from Iran.

An hour or so later, Ali stands and lifts a heavy rug from a nearby stack, one tagged ready for repair. It's handmade lovely—yellow, cerulean and black—large enough to flatter any bedroom floor. He gazes at it a second or two, says it's only 20 years old. But someone had machined onto it an unsightly dirty-white fringe, and he grimaces.

When he first arrived in Tucson, Almazan told him if he wanted to find peace he should go walk along the river. "So I walked down and looked for the river. I looked for two weeks! There is no river. I didn't know you called a wash here a river."

"But here I found peace," he says. He begins to tear the fringe away. Those fingers like a concert pianist's, exposing so little effort, obliging his vispanna.