It is not easy talking to folks during a pandemic.

The old woman lives in a singlewide and I've seen her a few times on different days relaxing on a lumpy couch, in mesquite shade outside her place. Her comfort there, near The Outlaw Saloon, shows a view looking south at another trailer, and beyond that a barbed-wire-topped fence housing a dilapidated pick-up with a rusted canoe strapped atop. How she moves at quarter speed, lingering, hunched over, dusty white blouse, house-shoes and faded poly pants. Her drowsy German Shepard milling about in the cool February sunlight.

When I look at her, a woman distressed by even her slightest body movement, a streak of impulsive affection rushes through me. How she could be like my mother, after my grandmother, hard-earned graces passed down through generations of Convent schools. The gentle way she mothers the dog, attends to a dark rectangle home, trimmed in fetching turquoise, the murky windows darkened by pulled shades, barricaded in by chainlink, and a sun-faded No Trespassing sign. It could be her hell, it could be her heaven.

I finally work up the nerve to go and maybe strike up a chat. I walk up to her chainlink fence, dead khaki weeds up my pant legs, a sudden intruder disrupting her world, and I frighten her, her brittle face filled of suspicion, and she moves around the front of the trailer up the few rickety steps and goes inside, closing the door behind her. The dog stays outside, cloudy eyes, no bark, sniffs around in the dirt and poops. Now I can only imagine the old woman's existence, in my limited scrutiny—the monthly check, the medications, the soft food, the TV, the dog, the aloneness. But I wonder things. Does she read her astrology? Does she contain restlessness by bleaching her kitchen floor? Does she have children or grandchildren somewhere and does she keep plastic flowers under their photos? Was she ever knocked breathless and sideways by some great love, or paralyzed by great tragedies? Is she frayed by longing? If so, does longing finally recede when you hit your 80s?

A stroll on another street and around a corner north of Roger Road into Palm Grove Estates. Dogs bark, prickly scents of early spring in the air. There is an old man out in the front yard his trailer and enclosed porch. The tailored place is trimmed in the exact purple of the Minnesota Vikings, given away by the team's warrior emblem in the yard, where three seven-foot-high windmills stand in line, homemade tin-men with pointed hats hanging from them, a welcome homespun whimsy in an otherwise unromantic stretch of homes. The beautiful citrus tree in front, kept green with love and attention. He steps into his yard carrying a hoe, moves to the tree and begins chopping the earth around a buried water fixture. I walk over to his chainlink and say "Hello, hey." His gaze stays focused on the dirt at the base of the tree.

He doesn't hear me. I go again. No response or even acknowledgment of my presence. I could tell by his face, the effort of his endeavor, that if I inquire more I'd likely frighten him too. I assume him hearing-impaired, and an ache falls over me. His dignity of home and outward show of some domestic harmony. If he is hard of hearing I wonder if he has found a way to enjoy a dampening of the madnesses and white noise of the outer world.

A walk further. An exasperated Latina mother chases a trio of little girls in pigtails and neon-colored jewelry around a toy-strewn yard, faces bright as blooming flowers. Turn a corner and a backpacked dude, maybe 25, trundles along the street in the opposite direction on some private quest. Tightlipped, he gives that searching tell-all eye, the what-you-need nod, which I learned long ago never to trust. There is always some impatience for hostility. The tats too, hardly pricey body-art designs, still sketchy enough to declare menace, etched from prison-yard purviews. Anyway, my first rule of scoring would've been to hit up trusted sources, the street sex workers, who are out still in 2021, within a mile or two of here.

Behind him, a hummingbird chases a finch around a tree, the little foe on him like a mad predator.

The neighborhood is inexplicable, filled of secrets and things I assign to purity, family and no false fronts. Like disadvantaged neighborhoods I've called home, it is a chaotic jumble of unspecified ownership rules, economics, dubious zoning and Biblical themes. Some yards are filled with indoors things, refrigerators, ottomans, rocking horses—as if a home is too small to contain their privacy and occupants are obliged to share outside remnants of their inner-lives.

The wild yard juxtapositions are pleasing to me, the concrete gnomes and rusted car axles, the added-on brick rooms to aluminum trailer homes, the expanding rust against fading plastic toys. The flagstone paths and strange crude gazebo things tucked behind walls of ocotillo and overgrowth and sprawling mesquite trees. You could live here in a darker corner and no one would ever find you.

A residential auto-shop, heavily fenced-in, sits next to a blown-out doublewide, unwelcoming except for the hand-painted Stop Police Brutality sign facing the street.

Elsewhere, pride comes in colors of love and hate, the flag of Mexico as a window-covering, a pathetic confederate flag roped up as sun shade. "Jesus Saves" as a home-greeting, and a shout-out on the side of a colorful cargo-trailer.

A backlot of average Tucson, incongruous to any one decade after WWII. To me, average America, desultory, a neighborhood of a country diseased, yet again defiled by greed, corruption and rage. On one hand, there is security found in some quiet desperation and the simplest forms of sheltered survival, and on the other, many forms of undisturbed ingenuity and startling unusual beauty and care, comfort created in a close-quartered community.

I get to the Quik Mart at Roger and Fairview Ave., a personal fave of locally owned stores. It is the neighborhood walk-to lighthouse, next to Cisco's Auto Sales, and further west, Janet's Beauty Salon in a flat, hopeful cinderblock.

The convivial guy manning the register doesn't want his name used. His sentences are rational and clear and he fascinates, his years as a potato-hauler, is now immovable in the world, and he's irate, not toward his job but at working-class limitations in general, the conceit of how the middle-class is gone and one must slave fulltime to barely make it. Fuck up, you're out too. He needs this gig, therefore prides his work, and as he moves through the aisles straightening racks, and ordering items with a handheld device, he talks his parents, siblings, Arizona and chasing shoplifters.

In minutes, a Native guy with kickass braided hair steps in for giant containers of soda, an obese white woman for smokes, a spindly Black man covers the aisles in seconds and pays for chips. The slightest of nods we exchange, our pandemic masks offering an unexpected sense of comradery. The corner convenience store, besides mass transit, is a last vestige of forced social interaction. I adore these crossroads. 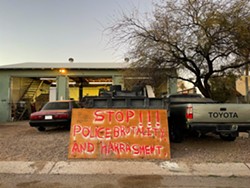 Later, afternoon outside, a skinny kid, maybe 12, hops off his bike in front of the Quik Mart, drops it on the concrete. He pulls his black T-shirt up over his nose as a mask and darts inside, moving with that recognizable glee of truancy, or a shuttered COVID classroom. I wonder if he is super-smart in public school and therefore gets bullied. Or if he will one day turn some kid obsession or art into a degree, or a career that will take him places. If he'll work with his hands, hanging drywall or pulling motors from trucks. If his parents are kind to him. Because I'm a dad now, I can fully understand the weight of such kindness to children no matter what they will one day do.

Moments later the kid counts change at the counter for a giant fountain drink, pushes through the glass doors that are never locked, his head connected to that drink by a straw, and lifts his bike off the concrete with one hand, mounts it and pedals off. Could've been me years ago. He rolls north into the neighborhood, steering with a steady hand, balancing that drink with skill.


Brian Smith's collection of essays and stories, Tucson Salvage: Tales and Recollections of La Frontera, based on this column, is available now on Eyewear Press UK. Buy the collection in Tucson at Antigone Books, 411 N. Fourth Ave.