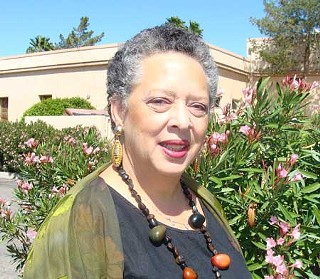 Edria Johnson transferred to Tucson for her job with American Airlines, and she says it was difficult to move to a city with a relatively small African-American population. Johnson's concerns were alleviated when she discovered the Black Women's Task Force, a Tucson organization that is gearing up to celebrate its 35th anniversary. The organization, while providing a sense of community for African-American women, is open to all women. Its 2009 conference, "Women Who Mean Business: Mind, Body and Spirit" will take place on Friday, April 17. For more info on the conference and the Task Force, visit the Web site.

How did you discover the Black Women's Task Force?

When I came here, I transferred from Atlanta. I came from a place that was predominately African American. In Tucson, the African-American population is small and very geographically dispersed. It was difficult at first to find African-American women, shops and places to patronize which catered to my needs. I had already put in a transfer for Dallas, because I just couldn't find anything here to identify with. I happened to go to a get-together someone invited me to, and I saw all these beautiful African-American women in the community. I was invited to a meeting, and I've been a member now since 1992.

Why do you think it's important to have a community to turn to when you live in a place like Tucson?

Perhaps I can illustrate this by an example. ... Even though I like to travel, sometimes, it feels strange in another cultural environment. The language is different; the dress sometimes takes getting used to; and sometimes, living accommodations are not the best. For some reason, I always feel better when I turn a corner in some city and see a McDonald's, those golden arches. ... I do not eat a lot of McDonald's. ... However, it gives me a sense of home when I see the signs. That is what I feel when I see a beauty shop that caters to black hair, a restaurant that has soul food, and a place, for instance, like the Tucson Southern Arizona Black Chamber of Commerce. I can walk in there and get information on African-American businesses, and that is important to a newcomer. This is why it is so important to have a grassroots organization like the Black Women's Task Force. We are a fountain of information.

After all these years, why continue to have a conference?

We are established, and it is important to maintain visibility. Our presence here ensures that African-American women have opportunities to share information and share the skills and mindset to be successful. The topics often represent us, but we always stress that it is a conference and an organization open to all women—that all women, of all cultures, have many commonalities.

What's different about this conference?

First, we are in an economic downturn, so we had to look at sponsorship differently. Business sponsorship and organizational sponsorship is hard to come by nowadays. Many businesses support us by buying one or two tables. This year, they couldn't do that. We had to think outside the box. ... Therefore, we didn't raise the cost of the registration, and we cut costs whenever possible without sacrificing quality. We want everyone to be able to afford it. Our workshops this year focuses on health and being competitive in the job market, on being your own best health advocate and the power to prevent disease—you can't be sick and successfully look for employment or move up ... without taking care of yourself first.

Has the economy affected a lot of your members?

Yes, even me. I retired in 2003 after working for American Airlines for 25 years. Then I finished my master's degree. I had a piece of property I wanted to do something with, so I opened up an assisted-living business. I started working on it at the end of 2003, and then I opened it in 2004. Last year, I closed it because of the economy. When I first opened it, I had a waiting list. ... When I decided to close, I was struggling to keep it full.

What do you say to younger women who haven't discovered you yet, but might consider joining?

If you are a young African-American woman with a desire to help, nurture and support other women in the community, come and join our organization. You will find mentorship, a common history and a friend.