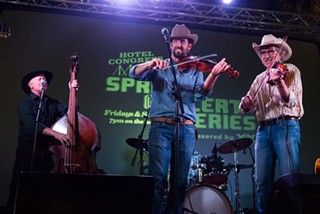 Although 2020 saw no formal festival, the minds behind the Tucson Folk Festival continued to support local music throughout the year with a series of intimate, livestreamed performances.

“We realized we needed to find new sites, new ways we could spread out our audience, and ultimately add a broadcast component so that the festival could be enjoyed by all, even if they weren’t able to come in person,” said Matt Rolland, president of the Tucson Kitchen Musicians Association, which produces the annual festival. “Our goal with redesigning the festival was to create a live performance opportunity for as many performers as we could and afford, and also make sure all the performances were happening in a place where safety recommendations could be followed.”

The event generally includes more than 150 musical acts across six stages, but this year, music fans can look forward to about 75 performances, ranging from local mainstays to nationally touring acts. The Tucson Folk Festival receives hundreds of applications each year, but in addition to this, the panelists honored all selected applications from last year as well. Rolland says that many of the musicians, understandably, were not able to perform this year as they were when they applied, which opened the door for other musicians.

The regional headliner, performing live from Park Place, is the western swing quartet The Tucsonics. This local group covers the likes of Bob Wills and Gene Autry on steel guitar, violin, drums and more.

Finally, the family show headliner performing from the Centennial Hall Stage, is singer/songwriter and “dad with an open mind and a sense of humor” Ron Pandy.

“Our goal is to be the best showcase and presentation of acoustic music in the Southwest,” Rolland said. “It is a festival where you can come and discover your new favorite group. Every year I go and see someone play who I’ve never heard of before, and just fall in love with their songs and the way they play on stage.”

After the last year’s cancellation, the festival board reconvened in June, and gradually formulated the 2021 event. The board realized the festival would need to be hosted on private property, as the City of Tucson was not granting event permits. Some of the private locations also served as inspiration for how to conduct the festival.

“It’s been a year where everyone’s coming up with creative ways to perform and keep the arts going,” Rolland said. “We never would have considered having the festival in a parking lot until we saw others trying those drive-in concerts. And then we saw musicians livestream so much, and asked what it would look like if we had a broadcast-only stage.”

Performances at the MSA Annex can be viewed in-person by up to 94 attendees in spaced out seating pods. Because of limited capacity, reservations are required and can be made online and in-person at any Bookmans store. Park Place Mall will utilize a drive-in set-up, available for up to 300 cars with no reservation required.

The UA’s Centennial Hall showcase will not have an in-person audience and is viewable online by live broadcast. This broadcast will include dozens of pre-recorded shows from out-of-state artists, or those who were not able to attend due to health reasons, as well as live performances. In addition, they will also broadcast the Stefan George Memorial Songwriting Competition previously performed at Monterey Court, and a live broadcast of the Young Artist Showcase and Family Show. The Centennial Hall show is presented by UA’s Arizona Arts and Arizona Arts Live!

“The festival this year would not be possible without the Arizona Arts and Arizona Arts Live team coming on as title sponsors,” Rolland said. “It’s been such a huge gift in terms of technical support, but also marketing support.”

Due to the isolation and lack of in-person performances over the past year, Rolland anticipates the musicians will have plenty of inspiration and new tracks heading into this year’s Folk Fest.

“I know we’ll hear some new songs about dealing with COVID, both with humor and with realism,” Rolland said. “I think that’s one of the things that’s best about the folk music genre, is people always find a serious and a humorous way to look at life and cope. I’m fully expecting people to find joy in reconnecting, and singing along, even though we’ll be spaced apart. It’s meant to be participatory.”