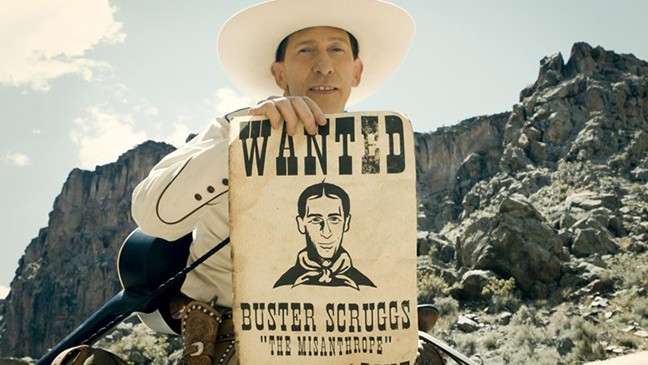 Courtesy
Netflix is traveling to the old west alongside the Coen Brothers, solidifying the streaming service’s place in the film industry.

Netflix is becoming a regular haven for our very best directors. Alfonso Cuaron's Roma will debut on the streaming service this December after a very brief theatrical run (and a showing at this year's Loft Film Festival). Martin Scorsese, David Fincher, Paul Greengrass, Guillermo del Toro and and Steven Soderbergh all have had, or will have, projects with Netflix.

The true stunner is that Joel and Ethan Coen, the Coen brothers, have also gone the way of Netflix with their latest, The Ballad of Buster Scruggs. The film is a six-part western anthology that fits snugly in their repertoire, which includes No Country for Old Men, Fargo, Barton Fink and Raising Arizona. The movie's arrival on Netflix, after a one week theatrical run, establishes Netflix as a true original film force.

The film opens with a story about the title character (Tim Blake Nelson), a singing cowboy who is frighteningly adept with his gun, casually killing many in the segment's few minutes. The musical ending tells us we are in true Coen territory, where weird, beautiful things can happen.

The other shorts involve an unlucky back robber (James Franco), a sad and greedy show runner (Liam Neeson), a wily prospector (Tom Waits), an unfortunate cross country traveler (Zoe Kazan), and a creepy stagecoach. All of the segments are good enough to be stand-alone films, and all of them successfully convey the overall theme, that the old west was a tricky, dark place.

For any Coen fan concerned that their film might be anything less than their usual brilliance, being that it is a streaming/TV affair, fret not. The Ballad of Buster Scruggs will go down as one of the year's best movies, as their films often do. It's also a nice companion piece to their other fine western, their remake of True Grit.