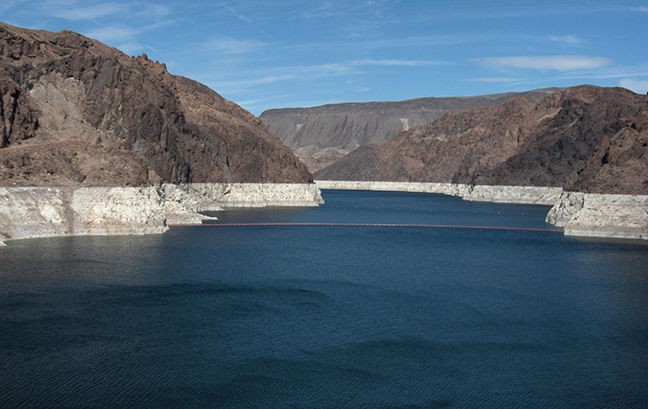 In the late hours of Jan. 31, the Arizona Legislature passed a drought contingency plan in a nearly unanimous vote: 60 for and none against in the House, and 28 for and two against in the Senate. At its core, the DCP aims to conserve the water level of Lake Mead, which supplies nearly 40 percent of Arizona's water and is currently under threat from a 19-year drought.

On March 25, the University of Arizona James E. Rogers College of Law hosted a panel of experts to discuss the plan, and ask the critical questions: Why was the DCP needed? Is this plan good for Arizona? How will it affect Tucson?

First, UA Regents' Professor of law and public policy Robert Glennon discussed the necessity of a drought plan beyond the recent lack of water. Glennon pointed back to the Colorado River Compact of 1922 as an obvious starting point, in that it allocated more water than existed in the river system.

"There's a complete disconnect between the amount of water given as a right and the actual amount of water in the Colorado River," Glennon said. "There are 16.5 million acre feet of legal rights annually, when only 10 to 12 million exist. It's really a game of musical chairs."

Two of the largest reservoirs of the Colorado River system, and in turn two of the most scrutinized areas, are Lake Mead and Lake Powell. At its greatest depth, Mead has a surface elevation of 1,221 feet. The DCP, like Arizona's 2007 River Shortage Guidelines implemented before it, indicates three tiers of water shortages on Lake Mead. If the water level falls to these tiers, stricter water cuts are put into place, though the initial plan for the DCP is for Mead's water level to never go this low. According to the Central Arizona Project and the DCP, if the Lake Mead elevation reaches 1,090 feet, Arizona must cut back 192,000 acre feet of water annually. If the elevation reaches 1,040, Arizona must cut back 640,000 acre-feet, and so on.

All members of the UA panel agree: The DCP is beneficial for Arizona. In part, it's good because it gives the state a plan for how to react should the drought continue or worsen, but it also puts some responsibility on other lower basin states. For instance, before the DCP, if Mead lowered to 1075 feet, Arizona was forced to cut back 320,000 acre feet while California cut back none. This new plan, as Glennon puts it, "shares the pain."

"Under the DCP, California agreed to take water cuts, and that was monumental," said Arizona House Rep. Kirsten Engel. "That's one of the main reasons this was beneficial for Arizona... Now there's going to be a clear impact on certain sectors of Arizona, and obviously it's agriculture that's hit the hardest."

The DCP sets "a schedule of voluntary cuts that users agree to take to keep lake levels sustainable" while at the same time protecting "high-priority users" from these cuts. Essentially, Arizona's agriculture will feel the brunt of water cutbacks, while the high-priority users, such as municipalities, remain unchanged for the time being.

But this plan is not without its compromises. Central Arizona Project agriculture will receive roughly $23 million dollars to build additional wells for agriculture. According to Tucson Chief Water Counsel Christopher Avery, the majority of the benefits are going to Pinal because most municipalities in the Tucson area have already partnered with local agriculture.

"You will not find the words 'water marketing' in any one of the agreements, but that's what it is," Glennon said. "People are being paid to not use water."

As for future outlooks, it is important to know the DCP only plans until 2026. Engel described it as a "Band-Aid." But even then, Tucson's water future seems relatively consistent, due in part to responsible land stewardship and water use over the past decades.

"There's a lot of water in Tucson under the ground, and there's more water coming into Tucson every year than leaving," Avery said. "We are in a position where we can reach safe yield. We're in good shape here."