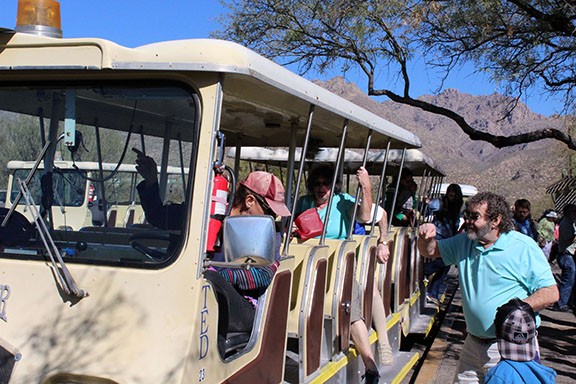 As shadows inch down canyon walls and the temperature drops, Sabino Canyon fills with a certain kind of visitor. Native Tucsonans, runners, bikers and walkers like Kim Haesuk come to find sanctuary among the saguaros before night fall.

"It's peaceful," Haesuk says. "I usually come with my husband. It's almost like meditating."

Dressed in a black exercise suit, her hair pulled back elegantly in a rhinestone clip, Haesuk is alone this time. She just got off from Scissor Talk where she works as a hairstylist.

Haesuk isn't sure what she'll see in the canyon today, but sometimes she sees mule deer grazing along the side of the road. There's only one thing that can break the magic of this place: the Sabino Canyon shuttles.

"I don't like them to drive by," Haesuk says. "It has fumes, and I don't want to see another vehicle. But I know a lot of people need that to enjoy the mountain."

Every day, eight hours a day, Sabino Canyon Tours drive visitors through the national recreation area. When the sky is clear, grey clouds can be seen spewing from the shuttle tops. Hot fumes consume those in their wake. The 30-year-old shuttles seem to sigh as they roll past, loud narration blaring from the open-air vehicles.

"I know they use biodiesel, but they still stink," Haesuk says.

Even from the Phoneline trail, a well-loved path that gains 600 feet in elevation up a ridge and then flattens out to run parallel with the main paved road, hikers can still hear the shuttles' narration.

"We want clean, quiet, electric, safe shuttles," says Paul Marques, president of the non-profit Friends of Sabino Canyon and critic of the current shuttle operator. "It's so awful when you walk up this beautiful pristine area, and you get all this noise and stench from the shuttles."

Marques along with his team at Friends of Sabino Canyon advocated for a competitive bidding process that would allow new companies to offer their services.

"We just rallied the troops to get local community people writing in," he said. Marques directed people to write to Rep. Martha McSally, who represents the area. They reached out to local businessmen, including Jim Click and Enid Zuckerman, and to the local utility company Tucson Electric Power.

Thanks in part to advocacy by Marques and others, the U.S. Forest Service opened the bidding process to the public in November.

The Forest Service asked that bidders bring in a fleet of environmentally friendly vehicles that limit air and noise pollution. Another request was that the operator offer an electronic means of purchasing tickets. For the past 30 years, the current operator has only accepted cash because he said it would cost too much to buy a credit card machine.

By July, there could be electric shuttles humming quietly through Sabino, according to the Coronado National Forest website.

An operator in the running for the new permit is the Regional Partnering Center. The center is managed by the federally funded planning group, the Pima Association of Governments. The same planning group that runs Tucson's Sun Tran and Sun Link. They propose bringing five new electric shuttles into the canyon, according to their website.

The center would get their startup funds from Tucson Electric Power. The company pledged $2.5 million, $1 million of which is a zero-interest loan.

Current shuttle operator Donn Ricketts does not feel hopeful about winning the bid.

"I couldn't compete with their prices but then I don't get subsidized by four different government agencies," he said of the Regional Partnering Center.

Ricketts is a serious man who wears coke-bottle aviators and chain-smokes Marlboro cigarillos. He has been firmly cemented in canyon life since he took the shuttle business over from his parents in 1987. He said he hasn't taken a vacation since 1992.

Ricketts' lawyer filed an injunction against the U.S. Forest Service in the U.S. District Court for the District of Columbia in Dec. 2017, but it did nothing to stop the Forest Service from accepting bids.

Ricketts said he had every intention to improve his shuttle service and had been researching electric shuttle purchases a year and a half before the bidding process was opened. One new electric shuttle would cost upwards of $200,000, he said. To make that economically viable, he would have to know he was guaranteed to get a new permit to operate in Sabino. He said he wrote a letter to the U.S. Forest Service asking for such a guarantee.

"I got assurance in writing from higher up in the Forest Service that I was going to get one," Ricketts says of a new contact. "But 12 days later they did a roundabout. They said, 'We're putting out for bids.'"

The Forest Service is expected to select a winner in February, according to the Coronado National Forest website.

Now as the Forest Service reviews its options, life in the canyon carries on as normal. On Saturday morning, the canyon is bustling with out-of-town visitors. People wait in lines just to board Ricketts' shuttles after handing their cash over to the worker in the stone ticket booth.

Many ride the 3.8 miles up to the end of Sabino's paved road and then enjoy a leisurely walk down. Others talk to trained volunteers in Forest Service uniforms to find out what trails to embark on.

The canyon is well-used and well-loved, and perhaps in better shape than it was in the 1960s, when private vehicles were allowed to drive on the paved roads.

"Back then, it was a zoo because you had everyone parking everywhere on these dirt roads," Sabino regular Tom Withey said.

A retired University of California Los Angeles audio engineer, Withey didn't grow up in Tucson, but he still remembers the first time his parents brought him to the canyon at the age of 7. He thinks the shuttles are an improvement to the car-ridden Sabino he once knew, but he also expresses hope that the environment would be even better with new shuttles.

Transportation in the canyon continues to evolve, but the draw of the canyon remains much the same: People come to find peace in Sabino.