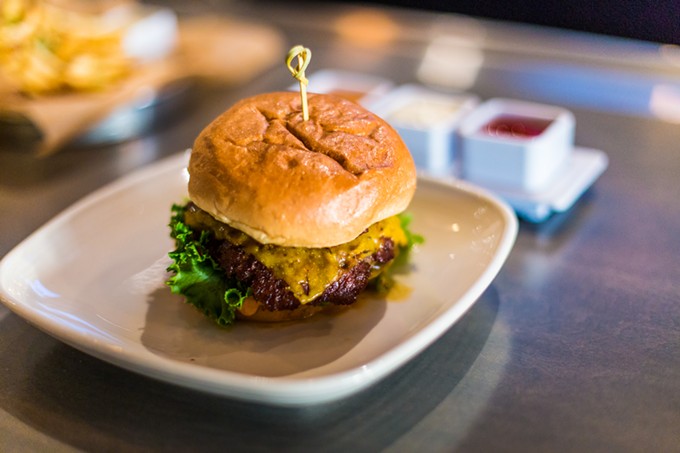 Anyone who thinks locally-sourced food is a soon-to-depart fad hasn't been to one of the busiest farmers' markets in Tucson and lovingly gazed at the boxes of lettuce, apples, purple egg plants, chilies, multi-colored zinnias or even happy cows.

Picture a photo album filled with images of what look like happy cows grazing and lounging. Maybe it's the background of the nearby Gailuro Mountains or the San Pedro River, or maybe it's the grass they eat, but surely their happiness translates into deliciousness.

Garrett Schulze says some people seem to think so, which may be why on this particular Thursday at the Santa Cruz Farmers Market, the Double Check Ranch booth doesn't just attract bovine picture gazers, but also eager-looking meat eaters requesting the brown paper-wrapped packages of ground beef or a beer roast headed for the crockpot.

"I'd like to think they also appreciate what we are doing. We were at the forefront of grass-fed beef before it was cool," he says.

The Double Check operations manager says those happy bovines are fed native grasses on irrigated ranch land. The cows like the grass, and customers like that too, plus the fact that the Arizona ranch doesn't use hormones or antibiotics. The way the cows are slaughtered that seems to count, too.

Being in control of their own slaughter process and keeping it a small, grass fed model was the vision of Eric and Jean Schwennesen, who moved to the Winkelman-area ranch in 1995. Their son Paul and wife Sarah now steer the operation, which has experienced unprecedented growth the past decade.

The younger generation accompanied by their young children were often a regular sight at local farmers' markets preaching the virtues of Double Check and grass fed. Now staff like Schulze and Gita Murphy take their place continuing the tradition of explaining the ranch and the cuts of meat available in the deep freezer they bring to all the markets.

The growth the Schwennsesen ranch has seen has gone beyond farmers' markets and into specialty food markets, as well as restaurants.

"It's the same reason people are interested in Double Check at the farmers' markets. Grass fed, taste and health, but also many chefs want to support locally produced food," Schulze said. "They want to support us because they know those dollars stay locally and support our own economy."

Paolo DeFilippis, co-owner of Choice Greens, GRAZE and the newborn Truland, says Double Check has been part of his restaurant family for two years.

"We made the connection through one of the farmers' markets," says DeFilippis. "Healthy options and locally sourced, and I would add quality products, is how we make these decisions."

Double Check meets all of those requirements. Besides Double Check, DeFilippis says a product out of Flagstaff called Tepaburger, which uses Tohono O'odham-produced tepary beans for a super-food veggie burger, is a popular Truland vegetarian option.

"They aren't preformed, and we have a special cooking method our customers like. It's what I often eat when I'm at the restaurant," he says.

DeFilippis has local restaurant roots with family who have owned and operated Michael Angelos for more than 40 years. He worked there while in college and after graduating went into real estate. When a property came up on the market, he approached his partner Jeff Katz with the idea of starting Choice Greens, a make-your-own healthy salad restaurant.

"We wanted to do something different. It's been 12 years now," he says. "GRAZE is just past it's two-year mark and Truland is the sister concept, which just opened."

Truland is a high-end burger place with truffles fries and sweet potato tots and more on menu, as well as a bar with local beers and an in development cocktail menu. Double Check is the grass fed burger option at both restaurants, along with beef from Neiman Ranch. "I think every restaurant has to make decision on its philosophy and on what customers want. For us its healthy options and good taste, and above all else, quality."

Besides quality and supporting local, DeFilippis says using locally sourced products builds relations. Maya Tea is a locally made product his restaurants use. "What's cool working with local guys on certain products is that all of those products are good and usually the people are good to work with, too," he says.

"I know them all personally by name–Manish at Maya or Garrett at Double Check who handles distribution for us. All are involved at the top and are always willing to talk to us."

Stephanie Bevington, general manager at Tucson established favorite Blue Willow, says it was an encounter the restaurant's owner had with Double Check at a local farmers' market that created the existing relationship between the restaurant and ranch.

"It's an amazing product, fresh and good taste," she says. "But you know it's even their delivery drivers we love, too. They are so nice to work with, and believe me, we work with a lot of delivery drivers."

You'll find Double Check on the Blue Willow menu as the meat loaf served at dinner and then served in a sandwich at lunch. "We don't have a lot of locally sourced things on our menu, but we've always felt good offering this. We use Cheri's prickly pear products in our baked goods and we started to use a local unpasteurized orange juice."

That juice is from Dish for Dosha, a juicing business with roots at the YWCA of Tucson.

"It's unlike any orange juice we've served before, and in a mimosa is so yummy," Bevington says.

In June, the restaurant celebrated its 38th anniversary, started by owner Janet Seidler in 1978 and now run by her daughter, co-owner Rebecca Ramey. Bevington says products like Double Check meat or Dish for Dosha juice are often selected because Ramey has had a direct experience. Other times products are handpicked when producers visit the restaurant.

"The way we look at it is, would I serve this to my mom. If not, then I'm not going to serve it to you," Bevington says.

It's what people have come to expect in the restaurant's long history.

"We're bringing new things on the menu soon, but old favorites will remain like the Blue Willow Special," she says. "We have many long-time customers, but we have new ones too and we need to keep up with trends in food. ... Yes, locally sourced food is part of those trends."