Darren Rhodes, owner of YogaOasis, says his first experience with yoga came when his mother practiced hatha yoga while she was pregnant with him. Last September, Rhodes and Michael Longstaff, who did the photography and design, published Yoga Resource ($39.95). The book shows Rhodes doing a series of 400 yoga positions. For more info on YogaOasis and the book, go to www.yogaoasis.com.

How long have you lived in Tucson?

I've lived here for 13 to 14 years, and became the director and owner of YogaOasis in 1999. At that time, the studio had one room. That has expanded ... and in 2001, we opened YogaOasis East, and in 2009, we opened a downtown YogaOasis we call YoDowntown.

How did you get into yoga?

It was kind of inevitable, even though I didn't know it at the time. My mom started doing hatha yoga when I was in utero. I also grew up in our home with her teaching yoga classes in the living room. It was always part of the natural setting, but it wasn't until I was in high school that I understood how it could help me. I was injured from wresting, and I thought I'd give yoga a chance to see if it could help me heal. I was amazed what strength and focus it requires ... and how it brought about a mental and emotional state that I was not akin to. Because I saw what it could do for me, I decided that instead of getting injured in a sport, I could do yoga to keep me from being injured. Through personal practice, a lot of practice, I was able to start teaching.

How did the idea for the book come about?

Originally, we did a poster in June 2005. And then in 2006, we released a smaller version, called From Tadasana to Savasana, of these same poses. It was distributed worldwide, and so far, we've sold about 9,000 copies. The purpose ... is we wanted people to understand what our classes meant, the different groups of postures we were practicing, and classes and the names and definitions. We realized when we were making a smaller version that we could put every pose, the size of a page, into a book. It ended up being harder to do than the posters, and we didn't know it would become bigger than our vision.

You decided to self-publish. How did you find the right company to work with?

Daniel Martin Diaz's gallery, Sacred Machine, is next door to us downtown. We went to him, and he sent us to the company he uses. It turned out beautifully.

How do you see the book being used? Mostly for instructional purposes?

I think it's instructional and inspirational. It's designed to fold and for people to be able to go through and find the pose (by) looking at the thumbnails and finding the page number. Then, once you get there and see the form itself, you can do the pose. Anyone who is doing yoga knows that the shape is an essential aspect of the pose—it actually is a form of studying, rather than just reading. Just seeing it can download a lot of nonverbal information—and in this case, a picture is worth a thousand words.

The photos are artistic, but there's a lot of information here, too.

We worked on how we wanted the photos to look. We wanted a white background. Each large-format pose has the names of each pose in Sanskrit and English, and how to pronounce them. We also wanted to organize it in the different categories, like standing, arm balances, back bends and supine. There are seven categories.

The book's been out almost five months. How's the reaction been?

What was the process of taking the photos like?

First, we thought of taking photos for classes and thought, "Why not do a group thing?" I was talking to my friend Ross, and I said, "I can't do all of these poses," but he encouraged me. We ended up doing all the photos in two days—16 hours on a weekend. In order to complete the original project, I had to work on specific poses that I don't usually do. What ended up happening is that the book itself became a form of study and integration for me. The project forced me to go to places I'd never been, with poses I'd never done before. We knew we wanted this to look a certain way, so I had to figure it out. It worked. 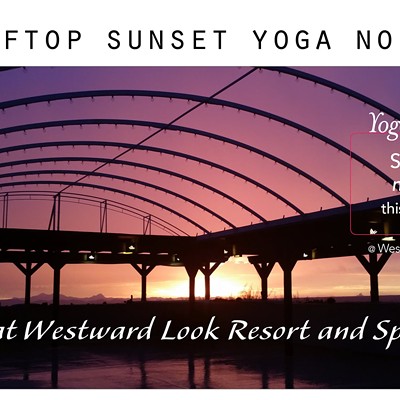 Beats & Bends Brings Yoga and Dance to the Roof of Playground

Start 2015 off with Some Yoga at These Spots Around Tucson