Jessica Lambertson was recently hired as the Southern Arizona coordinator for Mi Familia Vota, a national organization working to increase Latino civic engagement and voter participation. Lambertson needs volunteers to begin canvassing neighborhoods for 2011 elections and is organizing eight citizenship workshops in Tucson. The first citizenship forum will be held on Saturday, July 16, at a yet-to-be-determined location. For more info, call Lambertson at 884-8100, ext. 4603, or email her.

It has been here in Arizona since 2006, and we've done the last three elections in Tucson. It's been one of those things where we come, get some organizers and do some canvassing, and then we leave. It's been unfortunate that we just haven't had the capacity to have staff down here. But ... we decided we really needed to commit at least one employee in Tucson, which is why I am here.

We're doing sort of a two-pronged approach. Because civic engagement is our focus, we are working on citizenship workshops. We have eight planned just in Tucson alone in the next year, and those are for folks who are legal permanent residents who are eligible to become citizens—helping them file paperwork, learning information about the fee waiver, what certificates they need to prepare, and we also take their picture, which can be an expensive step in the process.

Is there some help with citizen-test preparation, too?

The second is elections. We try to get what we call low-propensity Latino voters—

Latinos who are eligible to vote and register to vote, but don't, for whatever reason. Sometimes it's, "Oh, I didn't realize there were that many elections," (and), "It's hard for me to go to the polls, because every time I go, they ask me if I am a citizen." Especially in Arizona, where ... you can vote by mail, we really push them to do that. You get 30 days to look at the ballot to decide how you think of all of the issues, and if you don't understand something, you can look it up.

How did you get hired?

One of my biggest draws as a candidate was that I worked with the Border Action Network, and I did some organizing with the United Church of Christ, which is one of the partners. I've done some work in the area, and know some of the ins and outs of Tucson, and that was important in hiring me.

What do you need most right now?

Volunteers, basically anybody. We have the capacity to use volunteers in whatever talent or interest they have. I have a retiree who is a retired lawyer, and he is going to be working on quality control and make sure that all the paperwork for citizenship forms is completed appropriately. If we have someone who is bilingual, young and is really good at speaking to strangers, they are a good candidate for an organizing position with our election work.

In the past, organizing was about getting people to the polls. What do you do now, in this era of mail-in voting?

What other organizations are you reaching out to right now? 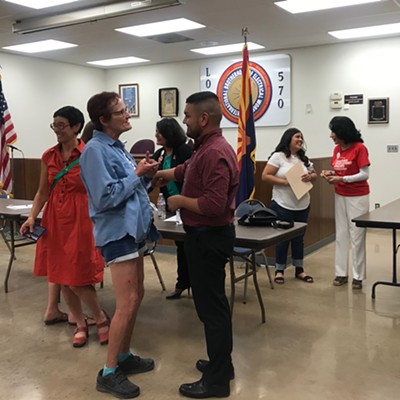