Fourth Ave bookstore celebrates a half-century of selling and swapping 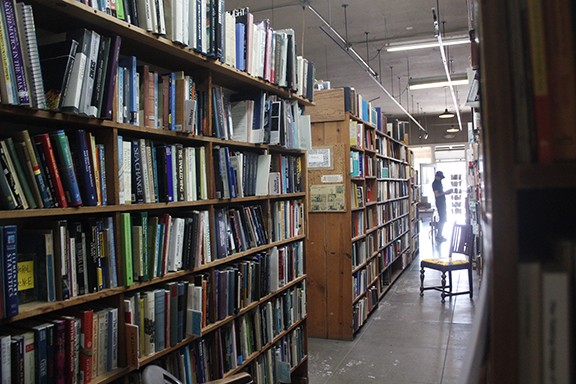 Emily Dieckman
Fourth Avenue’s Book Stop is a treasure trove of the rare, old and interesting.

The Book Stop isn't for everyone.

For one thing, you'll want to stay away if you don't like books. It's also no place for a person who doesn't like art, music, vintage photographs, good conversation, ice cream or a little bit of adventure.

"I've never gone in there looking for a specific book, but I've always left with no less than two," says Andy Schmitt, a Tucson resident who's been a Book Stop customer for almost as long as the store has been open.

That's nothing to sneeze at: The Book Stop celebrated 50 years of business on Dec. 2. Tina Bailey and Claire Fellows have owned it for half of those years, and are the third owners of the lovable literature haven, after founder Bill Merrick and his successor Laurie Allen.

Though they've only owned the place for a measly 25 years, Bailey and Fellows started working at the store's front counter about 40 years ago when Bailey was a fine arts student and Fellows was studying painting. Their love of art contributed to the growth of the shop's incredible drawers full of prints, children's drawings, pages of books, sheet music, old maps and more papery gems that any of us deserve.

"I think it's the best bookstore ever," Ash Ritter, a Tucson resident for only a few months but a Book Stop customer for several years, says simply. "It's rare books, old books, interesting books, books with the covers coming off, in the best way."

The store was originally located on Campbell Avenue, and that's where it was when Schmitt, no more than 14 years old, visited for the first time. Her college-age brother brought her, told her it was where all the cool beatniks hung out. It was love at first sight for his kid sister.

She'd go with her friends, get ice cream at the Baskin Robbins next door and stay in the Book Stop talking, laughing, perusing and reading, until it closed. Then, she'd wait on the curb for her dad to pick her up, with a heart and arms full enough of books to more than make up for the empty pockets that used to house her allowance.

The Book Stop made the move to Fourth Avenue about ten years ago, moving hundreds of thousands of books and their shelves first to a storage area behind Johnny Gibson's and then into their new home. They were just in time for the tearing down of a nearby overpass and the installation of the trolley tracks on Fourth to stop traffic and keep business to a minimum.

But after a few years, and with the introduction of a new neighbor—Isabella's Ice Cream—they started to find their stride again.

In a true gesture of neighborliness, the Book Stop and Antigone Books, the feminist literary haven down the street, refer customers to one another all the time.

Schmitt has 18 full bookshelves at home, but picking out her most treasured book is no problem: a gorgeous collection of pictures from the Chicago World Fair's White City that she found at the Book Stop.

"I got to feel like I went there because I found that book at the Book Stop," she says sincerely. "It's the coolest book I've ever sat and read."

Someone stole Schmitt's volume when her house was broken into, but the Book Stop gods were on her side: Two years after the robbery, she came across the same book on a visit to the Book Stop and bought it back. It's a crazy and magical story, and you get the feeling it could only happen at the Book Stop, a place that's crazy and magical for all of the ways it seems to exist outside of time and social barriers.

But it's in the center of the shop, between the bookshelves, where the magic really happens. Aside from the way it feels like Christmas every time someone brings in a new box of books, Bailey says watching different types of customers interact is her favorite part.

"Any day, you can walk in here and there's a homeless person reading over here and a professor over there, and an architect over here and a bunch of students looking through the drawers," she says.

And though it's not every day that the store will have high-profile guests, like Ray Bradbury (rocking, Bailey reports, a trenchcoat over Bermuda shorts), Cormac McCarthy, Larry McMurtry and Diane Keaton, people from all walks of life find ways to connect over their love of books all the time.

"When I go into the Book Stop, it has that feel of being hugged by a whole lot of friends," Schmitt says. "It's a cozy place to spend time in."

City Week: Picks of the Week