To Catch a Beer Thief

Have you ever scrolled through Facebook pages and, after discovering unflattering pictures of someone you know, briefly wondered why you associate with that person?

Thanks to Circle K, such observations could now lead to a cash reward—that is, if the people you know happen to have pulled off beer skips or cigarette raids.

Since August, the 625 Circle K stores in Arizona and Nevada have been occasionally posting surveillance-video stills from robberies and thefts to Facebook (facebook.com/CircleKAZCrimeBusters), in the hopes that someone might recognize the culprits and turn them in.

Tipsters can get up to $100 for their efforts.

"Social networking can be a great crime-fighting tool," said Carlos Estrada, loss-prevention manager of Circle K of Arizona and Nevada. "It used to be that someone would write a bad check, and we'd leave it under the (counter) glass, and they'd have to make good on it before they could buy anything else.

The program, known as Circle K Crime Busters, is affiliated with the Phoenix-based nonprofit-organization Silent Witness (www.silentwitness.org) and other anonymous-tip lines such as 88-CRIME (88crime.org). Such partnerships are helping authorities solve cases that otherwise wouldn't get closed, said Darren Burch, coordinator of Silent Witness.

"It's community-based policing," said Burch, who is also a sergeant in the Phoenix Police Department. "We'll receive tips from anywhere, and we'll pay rewards based on any felony arrest and indictment. Last year, we solved more than 300 felony crimes."

Silent Witness has no official numbers on how successful Circle K Crime Busters has been, though the plan is to try to separate tips submitted through the program in order to get a better idea of its effectiveness, Burch said.

Estrada said at least four arrests have resulted from the tips, which can be submitted through an online tip site, over the phone or via text. It's meant to be anonymous, he said, which is why no comments are allowed on the Facebook page.

"I want them to have a safe conduit to report crime," Estrada said.

Most of the people in the posted stills are suspected of misdemeanors, often larceny. Stealing 30-packs of beer, grabbing cigarettes from behind the counter or pulling some liquor bottles off the shelves usually doesn't warrant a full-scale investigation by police. But authorities welcome any assistance they can get on such crimes, said Sgt. Maria Hawke, a spokeswoman for the Tucson Police Department.

"If we're able to get information, by all means, we'll take whatever information we can get," Hawke said. "The more notoriety you put out there, the better."

Estrada said the surveillance footage he is able to provide to police is often excellent, but unless cameras catch a suspect's license plate, there's not much that police can do without more information on the suspect.

That's where posting the surveillance stills online comes into play, he said.

"With the lightning-fast results of social networking, you'd be amazed how quick people can identify them," Estrada said. "They know who they are."

A few of the Circle K posts involve armed robberies in which someone is alleged to have either shown a weapon or implied one in an effort to get cash from the register. This includes a post from Dec. 27 showing a man who Circle K said demanded "money, cigarettes and general merchandise" from a Tucson store clerk after saying he had a weapon.

A post from Jan. 5 shows a man who is suspected of ripping out the coin machines next to the cash registers—the ones that spit out your change down a little slide—at several Tucson stores.

The post includes multiple photos of what appears to be the same person at different stores. That's a key to Circle K's approach, Estrada said: cracking down on repeat offenders.

"I can guarantee you we're not putting up someone who's doing it one time, or someone taking a stick of gum or a can of Red Bull," Estrada said. "These guys are repetitive. These are guys that think this is their god-given right to walk in and walk out."

Estrada said he believes most of the people partaking in beer skips or smoke runs are doing it to resell the product, not consume it themselves.

"As prevalent as they are, that can't just be consumption," he said. 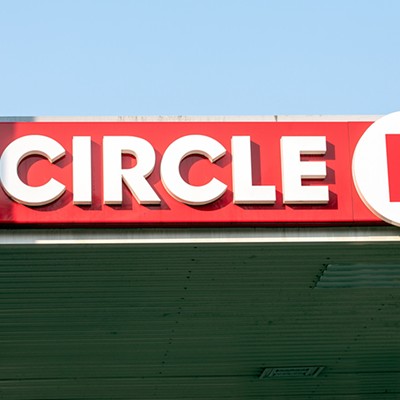