Ant-Man and the Wasp may not focus on the fate on the universe, but it’s a fun entry in the Marvel canon 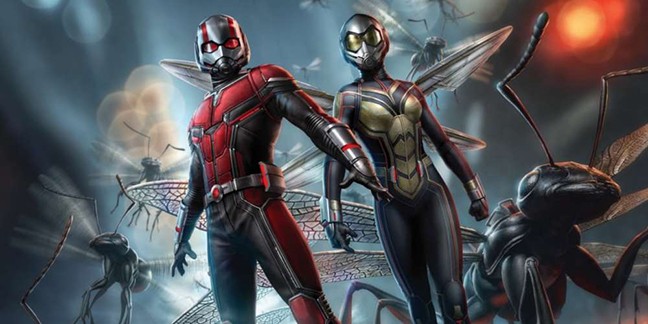 Ant-Man and the Wasp is a fun continuation of what returning director Peyton Reed started with Ant-Man three years ago. I whined a bit about the decent original, a movie that I wanted to be more subversive knowing that Edgar Wright (Shaun of the Dead) was supposed to direct it.

I'm over it. Reed is kicking some Marvel ass, and his sequel is actually better than the first. After the well done but admittedly gloomy Avengers: Infinity War earlier this year, Ant-Man and the Wasp joins the likes of Thor: Ragnarok as a fun, slightly eccentric diversion from the serious Marvel shit. This one, for the most part, just wants to have a good time, and it succeeds.

As the title implies, this is no longer a one-man show for the always entertaining Paul Rudd as Ant-Man. Evangeline Lilly returns as Hope Van Dyne and gets a bigger part of the limelight as the Wasp, who has decidedly better martial art skills than professional burglar Scott Lang. The Wasp lets the kicks fly in an early scene with a crooked businessman (Walton Goggins...God, I love his name), and she owns every moment she has on screen. It simply looks like a kick from The Wasp looks like it hurts more than one from Ant-Man.

Well, that would make sense. She trained him. Lilly's Hope was pivotal in the original, but she watched most of the action with her dad out of harm's way. This time, Hope proves that it would've probably been a better strategy to have had her throwing down from the start. She does a lot of the heavy lifting, while Lang sits next to Dr. Hank Pym (Michael Douglas) and watches from afar.

The film's main villain is Ghost (Hannah John-Kamen), a complicated badass on a mission to steal some of Pym's tech in order to cure her condition. That condition involves her molecular instability and the quantum realm, which, we also find out, might still contain Pym's wife Janet (Michelle Pfeiffer, seen in flashbacks).

While the stakes aren't quite as high as the usual Marvel fare (The entire universe isn't at risk in this one), Reed and his crew make it more than compelling. They also make it very funny, thanks mostly to Rudd, ninja master of comic timing.

Fortifying the laughter would be Michael Pena returning as the oh-so-happy Luis, who tells yet more amusing stories, one of them under the influence of truth serum. Randall Park shows up as an FBI agent watching over Lang, who is still under house arrest for the events of Captain America: Civil War. His eagerness to learn card tricks is one of the film's better gags.

The film also qualifies as one of the summer's better family films. Dr. Pym's mission to rescue his wife, his relationship with daughter Hope, and Lang's love for his daughter Cassie (Abby Ryder Forster, capably reprising her role) add heartwarming elements. As for the Ghost, her family issues also play a big part in the plot. Paxton (Bobby Cannavale), Cassie's stepdad and Lang's enemy in the first, returns, and is now one of Lang's best friends. It's all rather sweet.

But you don't go to a Marvel movie primarily to have your heart warmed, right? Don't worry. The action is first rate, as are the special effects, which often involve car chases with vehicles and buildings constantly shrinking and enlarging. Sight gags involving buildings as rollaway luggage, salt shakers and Pez dispensers also benefit from exemplary visual artistry.

There's very little connecting this installment to the overall Marvel universe story arc, but you do get the requisite Stan Lee cameo and the obligatory after-credit scenes. The Ant-Man franchise got off to a decent start with the first film. Now, it's the Ant-Man and the Wasp franchise, and that makes the future for this one even more exciting.