Mosquitoes in Arizona and how to avoid them 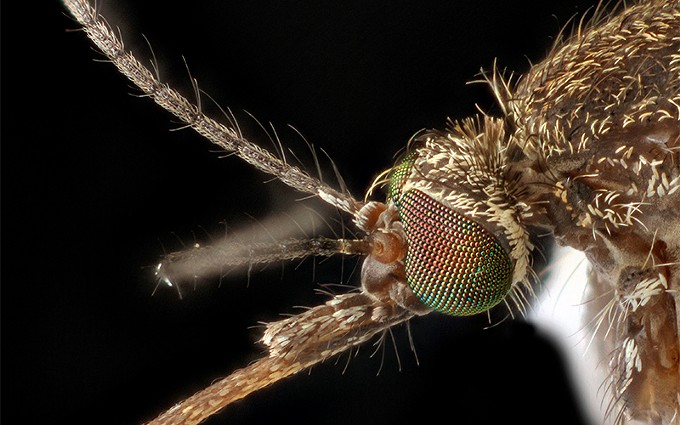 Alex Wild/University of Texas, Austin
Culex is dangerous because it can carry West Nile virus, often transmiting it from birds to humans.
Monsoon storms, haboobs,scorching temperatures: Let's face it, summer in Arizona comes with some big hazards. So it could be easy to forget one of the tiniest perils. Yes, mosquitoes, those buzzing, blood-sucking little demon insects.

The mere mention of the pests is enough to make your skin itch, triggering flashbacks of outings gone awry. But mosquitoes are more than a mere annoyance—they can be deadly.

Most mosquito-caused deaths are due to malaria, which has been eradicated in the U.S., but mosquitoes still spread dangerous diseases like the West Nile virus. The female, not the male, bites because it needs protein to produce her eggs; males prefer to sip on nectar.

The female uses her needlelike proboscis to pierce the skin of the host, inject her saliva (which triggers an immune response that keeps the blood flowing) and suck out blood. That mosquito spit is what makes you itch; it's also what spreads disease.

Several kinds of mosquito live in Arizona. Some can be dangerous, some are merely annoying.

Like vampires, Culex feed from dusk to dawn. Unlike vampires, members of this genus, often referred to as house mosquitoes, will enter your house uninvited. Garlic won't keep them away, so be sure to check the prevention section to find out how to avoid them.

Culex is dangerous because it can carry West Nile virus, often transmitting it from birds to humans. West Nile produces flulike symptoms and, in rare cases, neurological symptoms that can lead to death. The virus has become a permanent feature of the Arizona ecosystem. Culex can also be a vector for St. Louis encephalitis.

Aedes aegypti carry Zika, dengue, yellow fever and chikungunya, like a one-stop shop for infectious disease. Fortunately for Arizonans, these diseases aren't present in the state. Still, the danger with this species is that if a traveler brings a disease from an infected region, Aedes aegypti will happily wholesale it to the wider population. If enough people become infected, the disease could establish itself in the state the way West Nile has.

So, if you're traveling, do your neighbors in Arizona a favor and don't bring back a nasty hitchhiker. You can stay safe by reading our guide to preventing mosquitoes and their bites.

“No one took us seriously”: Black cops warned about racist Capitol Police officers for years

Arizona is home to several species of mosquitoes that do not transmit diseases and only seem to exist to dispel any romantic notions about the beauty of nature. One of these is Psorophora columbiae, or the dark ricefield mosquito. These flying furies are aggressive biters and, in extreme numbers, have even been reported to kill livestock. They also feed day and night, so the vampire jokes are out.

Protect yourself: Mosquitoes employ myriad techniques for targeting prey. They possess a receptor for detecting exhaled carbon dioxide emissions, can sniff out chemicals in our sweat and sense body heat, helping them zero in on a tasty patch of flesh. Still, mosquito bites are preventable if you take the right precautions.

The first line of defense against marauding mosquitoes is to apply repellent to the skin. Products containing DEET, picaridin, IR3535, oil of lemon eucalyptus, para-menthane-diol and 2-undecanone can ward off mosquitoes effectively. These products are safe even for pregnant and breastfeeding women, but should not be used on children younger than 2. Use only EPA-registered repellents because they have been evaluated and tested for safety and effectiveness. Other prevention methods, such as sonic repellents and essential oils, are not regulated by the EPA and their effectiveness is questionable.

It's also a good idea to wear long sleeves and pants, if you can bear it in the Arizona heat. With less skin exposed, mosquitoes will have difficulty finding a spot to bite. Mosquito nets are another good method and can effectively keep mosquitoes out of a bed or crib.

All mosquitoes use water to lay eggs, which hatch larvae that mature in the water before emerging like tiny primordial monsters to terrorize the townsfolk.

The dark ricefield mosquito, for example, is sometimes called a floodwater mosquito because its eggs are deposited in damp soil, only to hatch after heavy rains.

That means standing water and moist areas around the home should be avoided as much as possible. Read through to find out where the most common trouble spots are:

• Dump out any standing water around the home. If you're determined to keep open containers of water, treat them with larvicides.

• Clean your gutters. We've all put this one off at some point, but damp plant material trapped in the gutter is a perfect place for mosquitoes to lay their eggs.

• Fix your leaky faucets. Not only will that annoying dripping sound stop waking you up at night, but you'll also deprive mosquitoes of a potential nursery.

• Cover your garbage containers. Even if the water they gather doesn't attract mosquitoes, your guests and neighbors will appreciate it.

• Cover all yard items that could collect water or dampness. We're not judging your lawn-gnome affinity or the woodpile the freaky-looking spider scared you away from, but you really should cover these things.

• Fix your broken window screens. In Arizona, it's pretty easy to keep the windows closed and relish that sweet, sweet AC. But, if you want to feel the breeze, fix that tattered window screen to keep mosquitoes and other pests out. ■