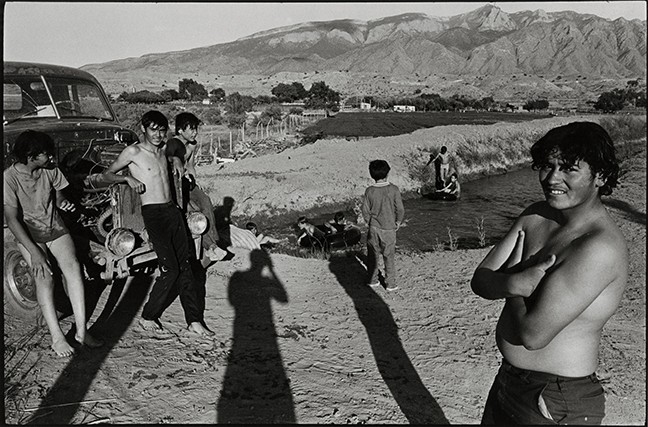 Danny Lyon first photographed Ferny Jaramillo way back in the early 1970s, when Ferny was a beautiful young boy.

A 1975 black-and-white photo catches Ferny with his pals at a fair in Bernalillo, New Mexico. Through Ferny shyly turns away from the camera, he and his cheerful buds seem poised to get up to some mischief. With the tilt-a-whirl and Ferris wheel ahead, life is sweet.

Forty-two years later, Ferny reappears in a Lyon movie. In Wanderer, a 2017 documentary, Ferny is in his 50s, an impoverished wreck of a man who's dangerously obese, speaks in nearly incomprehensible gibberish, and suffers from schizophrenia.

It's painful to look at the young boy in the photo and then see the man he has become, hopelessly damaged by poverty and illness, dead ends and no chances.

The photo of Ferny at the fair turns up as a still in the opening moments of Wanderer, which had its western debut in November at the Center for Creative Photography. And it's also on view at Etherton Gallery in Danny Lyon: The American Southwest and Mexico, an exhibition of some 73 gelatin silver photos, 35 of them never before exhibited.

Lyon's two genres nurtured each other this time: when he was making the movie, he came across his old photos of the young Ferny and other people he had filmed for the documentary. So he went back and reprinted many of these images for the exhibition, which also includes decades-old vintage prints.

Besides the New Mexico materials, the exhibition also includes some of Lyon's Mexico work and a handful of his Arizona images, including "Maricopa County," a powerful 1977 portrait of migrant workers near Phoenix.

Lyon, now 76, is renowned for many projects, including series on Chicago bikers and prisons in Texas. A Brooklyn native who transplanted to Chicago for college, he moved to New Mexico years ago, not long after he made his name making searing photographs of civil rights marches and bloodshed in the Deep South. The move west, to the region north of Albuquerque, steered him into a new and long-term project, documenting the lives of families like Ferny's.

At the CCP screening last month, he explained to the audience that he decided to follow the example of William Faulkner, who "wrote about the people in his 'yard.' I thought I could do work about the people around me." And, as he learned, "They're very nice people."

Captured both in Lyon's photos and movies over about five decades, these people live on the edge, struggling to make a living, and even to stay alive. In Wanderer, we learn that so far none of Ferny's many siblings have made it to the age of 60. Instead they succumbed in their 50s or earlier, to cancer, heart disease, heroin and murder.

Lyon's New Mexico is not the stuff of tourist brochures. He chronicles the real-life stomping grounds of his subjects, the state's carnivals and casinos, its graveyards for car wrecks and cemeteries for the dead.

In "Cars in an Arroyo, Sandoval County," 1972, the land itself has turned into a massive grave: a deep wash serves as the final resting place for decomposing vehicles. A young man inspects a salvage car in "ABQ, Auto Graveyard," 1971, but he's oblivious to a new threat—a dangerous diagonal of dark metal dangles precariously above his head. A young woman carnie worker at the New Mexico State Fair in 1981 is likewise overshadowed, if not threatened, by a looming Ferris wheel.

The interior spaces are cramped and often dimly lit. Ferny's sister Gloria, a young woman in 1983, poses in her crowded kitchen; a buddy, Andrew Sanchez, sits in the confining shadows of his bedroom, in a 1971 shot.

A heroic man bends over the engine of a car ("Eddie, Llanito, NM," 1983") and a Mexican worker labors at a house the same year, but by and large good jobs—or any jobs—are scarce in these works.

We never learn about Ferny's work history, but when he's a young man, he already seems lost, idling on a stoop with a friend in one 1983 photo, leaning against a house in another. By the time of the 2017 movie, he wanders confusedly through a casino, trying to make sense of the gambling machines' popping noises and bright flashes of light.

He lives in Albuquerque now, but sometimes longs for his boyhood haunts in Bernalillo, a small town proud of its history. Tiwa ancestors settled the land thousands of years ago, and the Spanish conquistador Coronado passed through on his expedition of in 1540. The town's dusty main street was once part of the Camino Real, the royal highway.

Lyon captures bits and pieces of this pride. Many town residents are descendants of the Spanish conquerors, and their cultural influence survives, to a degree. In the movie, women dressed in white lace sing in Spanish at a church service, and a man lights candles on his family's graves on Christmas Eve.

Bernalillo lies along the Rio Grande, between the Jemez and Sandia mountains, and even amid the dead cars and the ditches, the storied beauty of the New Mexico landscape is inescapable. The houses of Lyon's subjects may be small and run-down, but the skies—when they can see them—are big and the clouds are puffy.

"Basketball in the Snow, Bernalillo," is 1971 is a classic three-part western landscape—sky on top, mountains in the distance, flatland in the foreground. This one also happens to have a basketball hoop nailed to a makeshift pole, kids running near snow drifts, old cars parked nearby, and a wintry white light.

That same year, late on a golden summer afternoon, a dozen boys (no girls) have gathered to go tubing in a local canal. Two crews are floating on the water; on dry land, a couple of shivering sailors are getting warm in the sun. Lyon captures their rapturous smiles and the long shadows of the late afternoon.

And then there's the boy who flies over the water. The 1971 photo "Bernalillo Ditch" is shot from high on an embankment, so we're up in the air with the boy, looking at the lazy ditch below and the fields nearby. Lyon snaps the boy at the fleeting moment of full flight. The kid is soaring, the water below him, the mountains above, and his future, still unknown, yet to be discovered.