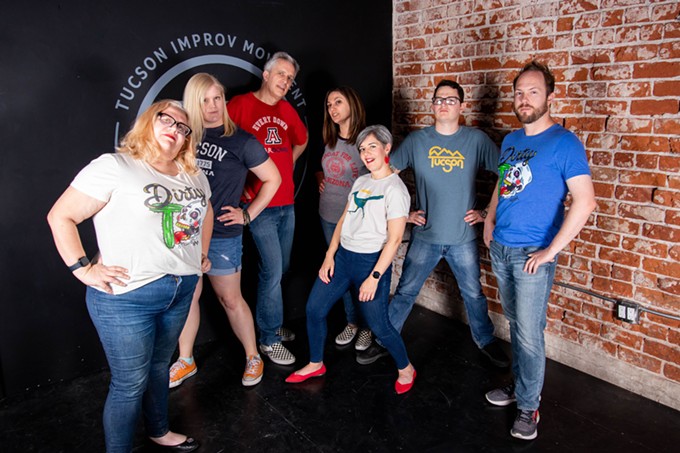 Justin Lukasewicz, owner and director of Tucson Improv Movement and the TIM Comedy theater, always seems to be beaming when he is there.

Lukasewicz is proud of creating and stewarding his vision for an improv company through its first 10 years, as of this month. He started with five improv students a decade ago and that has grown to 60 performing members, who stage five or six shows and a couple of jams every weekend. There are classes for aspiring comedians: five levels of improv and two levels of standup comedy.

Lukasewicz is passionate about his day job, too, as program manager at Greater Tucson Leadership. After several years as a UA residence director, he finds it rewarding to engage with Tucson’s businesses and social institutions, supporting and developing new leadership in our community.

The two jobs have more in common than we might think. Lukasewicz basically spends all his waking hours helping people grow.

“I always wanted TIM to be a safe space where people could learn the craft of improv, and if they ended up in a big city like New York, LA, or Chicago they could step into a class or on the stage with someone there and show that they know how improv works, that they could hold their own,” he said.

To that end, he said TIM classes teach “fast-paced, smart comedy” that pushes hard on the funniest aspect of a scene.

“The original vision was to bring long-form improv comedy to Tucson,” Lukasewicz said, “and to create a space where our company members could bring their ideas forward to create new shows and new concepts to present to the public.

“If you come out to see a show, you will see a well curated show, with people who have worked hard to put something dynamic together. We produce great shows in an intimate professional theater environment.”

Everyone is especially welcome to weigh in on his and his TIM leadership group’s success with all that this weekend. All TIM’s shows celebrate the 10th anniversary, and Lukasewicz reminds us that TIM sells beer and wine for anyone inspired to drink a toast to the occasion.

Thursday, Oct. 20 is something of an all-star show featuring winning teams from various internal competitions over the years. On Friday, Oct. 21, “The Soapbox,” which Lukasewicz considers the company’s flagship show, will host a  favorite storyteller, Jeannette Mare, founder of Ben’s Bells, making her fifth appearance in the show. At 9 p.m., TIM standup class teachers and other favorite standup comedians in the company will perform sets.

Saturday, Oct 22 at 7:30 p.m., “TIM Through the Eras” will bring back favorite show formats from the company’s first decade, and at 9 p.m., the audience will see how many TIM improvisers can fit on its stage for a show.

Even as the company celebrates its decade past, Lukasiewicz is looking to its future.

“One of my favorite things about running the theater is walking in while a class or a rehearsal is happening and to just hear and watch people having a good time and laughing with one another.

“Our challenge now,” he said, “is to continue (progressing) with a larger company. How do we make sure we don’t get stuck in our ‘old ways’ now that we have ‘old ways’ of doing things?  I want us to keep pushing the boundaries and learning and doing new things with the art form.”

Sounds like a job for a leadership development professional.

Among the first Latino comedians to embrace their ethnicity and confront racial stereotypes, George Lopez continues to advocate for Latino comics to move into the mainstream. He was the focus of an award-winning documentary on the topic, “Brown Is the New Green: George Lopez and the American Dream.” He has said he tries to represent Latinos in a way that’s “true to their realities and aspirations.” He’s been at it so long, now he’s practically mainstream. He’s made four HBO specials, and co-created, wrote, produced and starred in an eponymous sitcom that ran for six seasons on ABC. He performs at 8 p.m. Saturday, Oct. 22, at the AVA Amphitheater at Casino Del Sol, 5655 W. Valencia Road. Tickets are $30 to $100 via hetix.com.

Those awards other comedians list in their credentials as “nominated for” — writer, actor and comedian John Mulaney probably has two. His bio is a laundry list of lauds and that’s why we probably should see him now before he outgrows our Tucson arena. Most noteworthy are his two Emmys and a much-coveted Writers Guild of America award. He also starred in the hit Broadway show “Oh, Hello”, which, with his co-star Nick Kroll, morphed into a Netflix Special and a podcast of the same name. Mulaney performs “From Scratch” at 8 p.m. Friday, Oct. 21, at the Tucson Arena, 260 S. Church Avenue. Tickets are $23 to $147.50 via ticketmaster.com.