Tilting at a Windmill 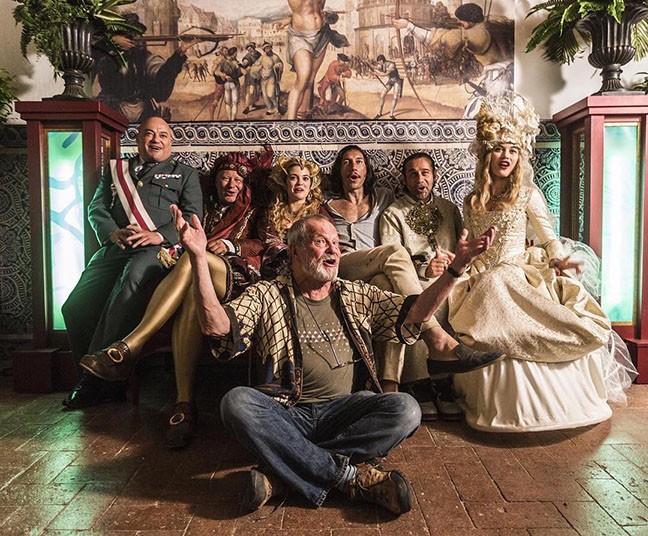 Terry Gilliam has been trying to make The Man Who Killed Don Quixote for nearly 30 years, the most exposed and public of his efforts being a 2000 effort starring Johnny Depp and Jean Rochefort, one where he actually got to the point of rolling camera.

The plug got pulled on that production after Rochefort, cast as Quixote, turned up with a bad back and Jesus or the Devil rained down upon Gilliam's set with a vengeance that wrecked the landscape and washed his equipment away. Further efforts to film Quixote since then have been mired in lawsuits and insurance issues, with many cast members, including Ewan McGregor, Michael Palin and Robert Duvall, passing through.

So it was with a little bit of shock that I found myself sitting down for The Man Who Killed Don Quixote, a finished film directed by Terry Gilliam, almost 20 years after the documentary Lost in La Mancha depicted the collapse of the Depp iteration.

As a Gilliam fan, it is with a heavy heart that I report the film is, not too surprisingly, quite the mess, the result of too many revamps and adjustments over the years.

The problems are not with the performances. Adam Driver does an excellent job stepping in for Depp as Toby, a frantic, disillusioned TV commercial director who longs for the esoteric days of his not-too-distant filmmaking past (a character clearly modeled after Gilliam himself). Jonathan Pryce proves to be a perfect choice for Don Quixote, or rather a cobbler given an acting gig who goes so method in his approach that he believes he's the real Quixote.

The film has Toby seeking out the Pryce character in an effort to bolster a current, commercialized version of the Quixote story. In his travels, he confuses dreams with reality, finds himself being mistaken for Sancho Panza (Quixote's dim sidekick), witnesses the exploitation of women in the workforce and battles some fat giants.

The screenplay, co-written by Gilliam, is an ambitious one that shoots for satire about our current political atmosphere and the state of filmmaking in general. Its plot-driving device, that being the blurring of reality and the dream world, flat out fails. This is the first Gilliam film shot on video, and the visual richness that accompanied his previous films is nowhere to be found. Gilliam's often violent and harried style, accompanied by sometimes tight, claustrophobic visuals, doesn't translate to the video lens. Much of this movie is just a spastic, visual mess.

Because the dream world and real world have no true visual distinction, Gilliam constantly has Toby pointing out when he is in a dream or not. It's left to the viewer to really figure out what is going on, and what is going on is just some major storytelling funk. It just doesn't work, especially in the film's second half, where it all falls apart.

There are some inspired moments. The giants sequence, so memorably depicted in Lost in La Mancha as Gilliam's big moment in the Quixote story, shows a flash of what the movie could've been. Granted, the movie he has made today was done for 2/3 of the budget he had for Quixote 20 years ago. Gilliam has expensive visual ambitions, and trying to convey them on shoestring budgets doesn't work. Granted, big budgets are justified by the public's want for a film, and interest probably isn't too high for a blockbuster Quixote movie.

No doubt, Gilliam's career went on a severe downhill trajectory after the failure of the original Quixote. Movies like Tideland, The Brothers Grimm, The Zero Theorem and The Imaginarium of Doctor Parnassus are pale representations of what the man is capable of. Now that Quixote is done and out of the way, perhaps the director (still amazingly spry at near 80 years old) can get back to the business of focused yet deliciously crazed Gilliam moviemaking

Gilliam has said in interviews that he just wanted this movie out of his system. Now that Quixote is finally on screens, perhaps it will vacate the cherished auteur's mind and allow him to get on to better things.