courtesy illustration
A mock-up of Union on 6th, from the corner of Fourth Avenue and Sixth Street.

A committee approved the design for the controversial Union on 6th development—one more step toward building a 7-story residential and commercial project in place of the closed Flycatcher Bar.

The Infill Incentive District Design Review Committee, which oversees the design of developments in an area covering much of downtown and beyond, approved the design with a number of conditions, which need approval from the interim Planning and Development Director Scott Clark before going to Mayor and Council.

One of the most disputed conditions, which remained vague after the design approval, is enhancing resident access from the building to Fourth Avenue. The Fourth Avenue Historic District Coalition, comprised of many local merchants and neighbors, has been asking for the building's design to encourage future residents to interact with Fourth Avenue, rather than being an isolated structure, like the developer's other project in the area, the student-housing District on 5th.

courtesy illustration
A mock-up of Union on 6th.

The Union on 6th includes 254 residential units, of which roughly 50 percent are studios and one-bedrooms, 40 percent are two-bedrooms and the remaining units are three-bedrooms. EdR representative Rory Juneman says the target demographic is young professionals, grad students and empty-nesters.

While there's been debate over whether the project is actually student housing, since that is the vast majority of what EdR does, the company says undergrads will not likely pay for the market-rate housing that will offer year-long leases by the unit rather than by the bed, like typical student housing.

The building will also have about 7,500 square feet of commercial space spread out between Fourth Avenue, Sixth Street and Fifth Avenue.

Another condition involves retail space on the northeast corner of Herbert Avenue and Sixth Street. EdR, the Memphis-based student housing company who bought the property, wanted to put a townhouse there, which would be one of four in a row facing Sixth Street. Stakeholders with the Fourth Avenue Historic District Coalition and members of the design review committee want that corner to have retail on the ground floor, to keep with the other retail on Sixth Street, between Herbert and Fifth Avenue.

Corky Poster, an architect and planner who's worked on many significant Tucson projects, said he agrees the corner should hold retail space.

"It just cries out to be commercial space," he said. 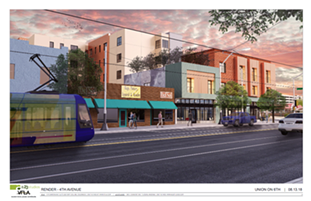 courtesy illustration
A mock-up of Union on 6th.

Juneman said EdR did market research and found that residential is more in demand in the area. They also said making the ground floor into commercial would cut off access to the second-floor living space. In the end, EdR representatives agreed to make that quadrant a commercial/living space where someone can live above their own shop.

Another condition was that public amenities be included in the rent to incentivize less personal car use and ownership: a 50 percent discount for public transit and Tugo bike share as well as access to Zipcar car-sharing.

And the last conditions were more shading around the building, a slightly expanding loading zone for things like Uber pick up and package drop off, space for murals on the outside of the building, and that EdR have an annual review meeting with the Fourth Avenue Merchants Association and the West University Neighborhood Association for the next five years to address any parking and traffic issues that could arise.

Carolyn Laurie, principal planner with the City of Tucson, said that after reviewing the project, city design professionals found the project "in harmony with the goals and outlines and principles of plan Tucson."

But a number of Fourth Avenue Historic District Coalition members who spoke at the committee meeting were not pleased with the design.

Jasmine Pierce, one of the owners of the Surly Wench Pub, said the design was reminiscent of the Pima County Jail.

"This is a vibrant community; this should be designed appropriately," she said. "This is a building that's going to tower [seven] stories above the existing historic buildings. It should be beautiful. It should be welcoming. It should benefit our historic district."