Three of a Kind 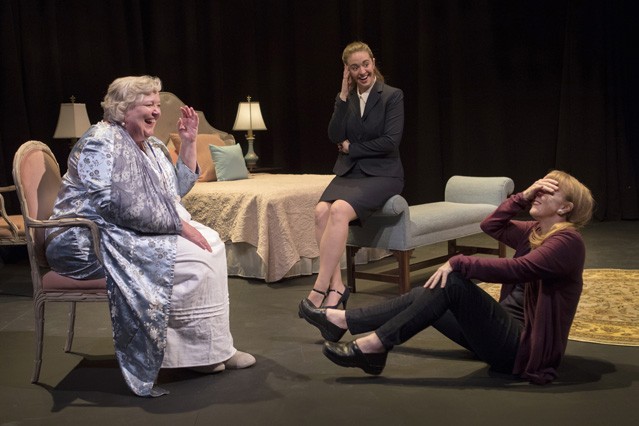 Tim Fuller
Tall order: Cynthia Meier as A, Holly Griffith as C and Patty Gallagher as B in Rogue Theatre’s production of Three Tall Women.

And so it goes.

This is the refrain that characterizes a sort of philosophical sense of Edward Albee's Pulitzer Prize-winning play Three Tall Women, currently on stage at The Rogue Theatre. The group has given the show a very good production thanks to the three actresses who portray the women referred to in the title, which, it turns out, is really just one character. Mostly.

If you don't know the play before you arrive, you might be a bit surprised or downright confused by the set-up and experience that Albee lays out here. Here's a bit of a guide.

It's not critical to know, although it is interesting and perhaps informing, that this is, at least in part, a autobiographical story. Albee is giving us an unraveled and then re-knitted look at his adoptive mother, Frances, with whom he did not get along. Theirs was a wealthy family, thanks to Albee's father and grandfather, a family of white privilege and Westchester upper crust. Young Albee, recognizing at a very early age that not only was he homosexual but that he despised the conservative views of his family (and having been kicked out of numerous schools), left home and made his way to Greenwich Village, where he found fellow artists and began writing plays. His success is well-documented.

Albee's work has always challenged audiences with its intensity and raw emotions and the looming presence of mortality. In Three Tall Women, which was written later in his career, decades after the successes of Zoo Story, Who's Afraid of Virginia Woolf? and A Delicate Balance, Albee exercises a rather stylized look at death, and the life that precedes it, through characters known only as A (Cynthia Meier), B (Patty Gallagher) and C (Holly Griffith.)

In the first act, in a nicely appointed bedroom, there are gathered three women. A is in great decline, a sometimes sharp 90-plus year old, who will argue that her age is 91 although it is 92, but one also suffering dementia, wandering in her memories that are sometimes light-hearted, sometimes dark, angry and defensive. This also describes her words to B, her middle-aged caretaker, and especially to C, a young woman from A's lawyer's office whose mission it is to get A to take care of some important business. Whereas B can let A's wandering mind and erratic outbursts simply be what they are ("And so it goes"), C, youthful and intent on doing her job, is impatient and intolerant of A's attitudes and senility. At the act's end, A, tucked into bed by B, has a seizure or stroke, leaving B to take charge in her caregiver role and C stunned and sobered.

As the curtain is drawn on the second act (I don't think I've ever seen a curtain used in a production at Rogue), there is the same bedroom and in the bed the appearance of a body, the face of which is covered with an oxygen mask; A has survived the stroke, but barely. B and C appear in similar but differently hued dresses, and in walks A, clad in a dress complementing the other two. And we get it: these three are now all A, but at different ages. It's a completely different convention than Albee has used in the first act, especially when the three actually address the audience. And it's a fascinating interplay of who and how this character has become who she is, in stages and as a whole.

Christopher Johnson has directed the piece with a sensitive and graceful touch, relying on each actress to exercise her skill to capture the moment of being 26 years old, 52 years old, having also been 26, of course, and then 92, albeit a revitalized 92. And these actresses are capable enough to give grounded, genuine readings with a resonating emotional tenderness and honesty in this unique set-up, integrating themselves for their own sakes as well as for ours.

There is another character in the show, one who never speaks. He is simply listed as The Young Man (Ryan Parker Knox) in the program, and he appears in the second act, kneeling at the bedside of the near-dead A throughout the act. We have heard A speak badly of him in the first act, as ungrateful and selfish, never coming to see her. But we get no sense of who he really is and what their relationship was actually like. It's a strange device, and Knox demonstrates only a worried look on his face as long as he is on stage. As a character, there isn't much to work with; he's more ghost himself than any of the others.

Albee has commented that he wrote this show as a sort of "exorcism," ridding himself of the toxic relationship he had with his mother. But there is no obvious sense of exorcism here, at least as we might imagine an exorcism to be. For one thing, Meier does not invite unreasonable scorn, nor does she demonstrate a hideously nasty, hateful domineering streak, as Albee has described his mother. Yes, we see her calling out those who she is sure is stealing from her and exhibiting her bigotry and classist sensibilities. But her age invites a sympathy in us. Age somewhat excuses some of her manner and what comes out of her mouth. She is difficult, yes, as someone might be for her age and struggling with her maladies. But we don't see her as one needing to be exorcised, nor do we see a hateful presence in B and C in the second act. Maybe the exorcism of which Albee spoken has actually resulted in a reconciliation, a re-integration of what was so fractured for him.

Albee and the actors find wonderfully wry and piercing humor throughout, and Rogue's musical director Jake Sorgen provides a fitting musical landscape for the action.

Despite the Pulitzer Prize, this may not be one of Albee's better plays. But here enlivened by wonderful characterizations, Three Tall Women intrigues and ultimately touches us.