Three For All: Tucson’s Mayoral Candidates 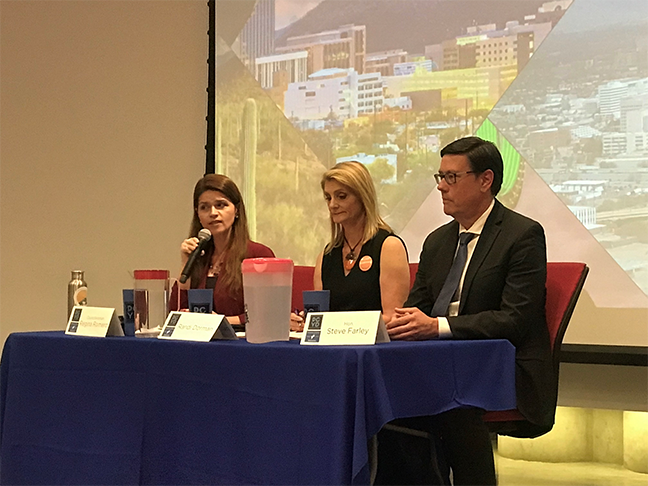 With a primary election coming up in August, mayoral candidates Steve Farley, Randi Dorman and Regina Romero have about four months to win over the hearts and minds of Democratic and independent voters.

The three candidates answered questions crowd-sourced from social media and curated by the Pima County Young Democrats and the University of Arizona Democrats at a public forum last Thursday, April 18.

While there are a handful of Republican and Independent candidates in the race as well, a Democrat is most likely to succeed. The city has 117,752 registered Democrats, 59,395 Republicans and 82,518 others.

The three candidates are on the same page when it comes to improving public transit, although they disagree on strategies. Dorman would enact a halt on fossil fuel buses and initiate a move toward electric ones. Romero envisions a rapid bus transit system that runs on electric, where designated bus lanes would take people across town in a timely fashion.

Farley, whose most notable accomplishment is his work in Tucson's Regional Transportation Authority, made the argument that good public transit promotes a healthy democracy because people will interact in a better way when they engage in shared spaces.

To enact water and energy conservation initiatives throughout the city, Farley proposes a "climate change mitigation plan" that would draw input from engineers, scientists and public policy experts at the university to lay out steps for greener Tucson.

Dorman, who worked in marketing in New York City before moving to Tucson and launching a development firm with her husband, suggests urban infill, repurposing old buildings and a sliding scale for rainwater harvesting grants so that energy-efficient upgrades can be more accessible to everyone.

Each candidate had to answer one question reserved especially for them. Dorman, whose development work has focused on the greater downtown area, handled a question about gentrification.

She calls the issue of gentrification a "balancing act" between protecting residents from being displaced and fostering future investment in the city.

"The city has facilitated in investing in the downtown area but hasn't yet created the tools to protect the neighborhoods, and there are tools available," Dorman said.

Romero's solo question was about why she won't step down as current Ward 1 council member to run for the mayor's seat. She replied that the election doesn't affect how she votes on the dais.

Farley, who spent split his time in Tucson and Phoenix over the last 12 years as he represented midtown in the Arizona Legislature, was questioned about his knowledge of Tucson and understanding of local government.

He has adopted a "hometown hero" platform, claiming he protected Tucson from feeling the effects of conservative legislation coming down from the capitol.

"Being up there, fighting what I have to fight to protect our traditions, our culture and our people down here is not easy, but it has been an immense privilege to represent the people of Tucson and stand up for common sense," Farley said.

All three candidates said they were opposed to the Tucson Families Free and Together ballot measure that could appear on the November ballot if supporters can gather enough valid signatures. The proposition aims to make Tucson the first sanctuary city in Arizona by limiting the circumstances under which police can investigate immigration violations.

The candidates said they support the sentiment behind the proposition, but all three say it's too risky and could cost the city $100 million dollars of state-shared revenues.

Romero said Tucson already does 50 percent of what's in the measure, and that our time would be better spent working to take down "the root of the problem," S.B. 1070. That controversial 2010 state law requires police to determine the immigration status of someone arrested or detained when there is "reasonable suspicion" they are not in the U.S. legally.

The organizers of TFFT have stated that their initiative broadens protections against profiling, prevents officers from inquiring about immigration in specific locations and requires them to advise people of their rights when they make contact.

Dorman said the initiative was a political solution, when a practical one exists. She suggests updating the Tucson Police Department's general orders and investing more in nonprofits who work directly with immigrant communities.

Farley used most of his response time to talk about how he and other community members made welcome signs for refugees at airports, gave them gift baskets and hosted potlucks, rather than touching on actual immigration policy.

While defending his stance against the proposition, he said the best case scenario for the initiative is a "technical change," where policies that already exist will be codified in the city charter, and the worst case scenario is Tucson and the immigrant community will become political targets should President Donald Trump send out a tweet about the sanctuary status.

He claims none of the refugee agencies working in Tucson have endorsed this initiative, and that they share his concern for unwanted pushback.

Zaira Livier, one of the prime backers of Tucson Families Free and Together, denied Farley's statements in a Facebook post that evening. She said the initiative is endorsed by Keep Tucson Together, The Florence Project, Paisanos Unidos, Colibri Center for Human Rights, No Mas Muertes/No More Deaths, Casa Maria and more.

Romero said the City of Tucson is limited in what it can do because of the Arizona Legislature.

"These sanctuary cities are in California, or in Seattle, Washington, they are not in Arizona," Romero said. "In Arizona, the state Legislature has been micromanaging cities for the past 10 years and passing anti-immigrant laws that hurt our communities."

Farley and Dorman believe that the other possible ballot measure—which proposes ward-only city council elections—should go to the citizens for a vote, while Romero believes that the current hybrid system works and keeps council members accountable to all Tucsonans, not just those within a specific ward.

For the city's economic future, all three candidates are focused on making it easier for small businesses to succeed.

"In the past, we have often chased the next shiny new thing at the expense of our local small and medium-sized businesses," Dorman said.

She wants to expand the city's two-person economic development department into a much larger operation to assist with job training, technology updates and more.

"I think that the businesses that are going to move Tucson to the next level are already here, we just need to nurture them so that they can help us grow," she said.

Farley believes the businesses that will transform the city haven't even been created yet, and are sitting in the minds of students at the University of Arizona. He sees the biggest obstacle for small businesses as access to affordable health insurance options for their employees, which he suggests would be solved by the city creating a public health care plan.

"We take our city health plan, we self-fund it, we hire a third party administrator to manage it, we save $70 million a year, and then we open it up to sole proprietors and very small businesses to have better health coverage at lower premiums and lower copays and lower deductibles than what they can afford on the individual market right now," he said.

Romero believes Tucson needs to give the same economic incentives that they do large companies to small businesses and startups.

"Small businesses in Tucson are 60 percent of the job creators," she said. "We need to make sure that the City of Tucson treats our small businesses and startup companies with respect."

Dorman says Tucson has reached a "saturation point" with the student housing that has gone up in recent years. She mentioned the group of business owners on Fourth Avenue who accomplished the first Community Benefits Agreement in Tucson with a housing developer who plans to build units at Fourth Avenue and Sixth Street; she believes it should be a model for the rest of the city.

Farley says the city has to fight against an impending "generification" of the growing downtown area, where national retail and restaurant chains diminish the city's aesthetic.

"Keep Tucson Weird is a good thing to strive for, but we can also keep Tucson prosperous at the same time," he said.