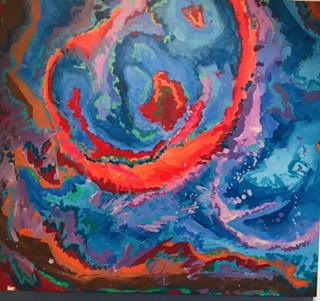 "I have a Motherwell in my window," says Athena A. Roesler, proprietor of the Gallery 2 Sun in the Warehouse Arts District.

The work, by the famous Robert Motherwell, is a collage in black and tan, with a fragment of sheet music that suggests a violin. But the window also features paintings by living local artists. Currently, Howard Kline is showing bright works partly inspired by Abstract Expressionists like Motherwell.

In fact, Roesler says, "much of Howard's work is an ode to mid-century artists."

Right now, the gallery is closed because of COVID. But fans can visit by calling for an appointment with Roseler, who says she's available most days. And if all else fails you can take a gander at a batch of gallery works Roseler has hung at her brother's restaurant, Bacio Italiano, near the UA.

Or you can get a good look through the 2 Sun windows.

The window works are excellent examples of the gallery's unusual specialization in both "local artists and vintage modern art." In the renowned artist category, besides Motherwell and others, there's the late Israel Levitan, a sculptor of the mid-century New York School. Levitan once said he aimed "to produce sculpture of such simplicity that it hardly seems carved or modeled." Visitors can see if he succeeded in the gallery's collection of his work.

Jack Busby, one of the local artists, is a 70-something native Tucsonan who has only shown work publicly in recent years. The hard-working Busby has been a wrangler, a hair stylist, a store owner and a landscaper, but he spent "decades training and immersing (himself) in painting," Roesler says. "His eclectic style is colorful and charming. He does bright acrylics on canvas. Some are 'folk arty,' but he also does abstraction." He has "a broad perspective on humanity," she adds, "and a unique sensitivity in his work."

Other locals now displaying their work include Danielle Niebling, a painter and ceramist who lives in the Rancho Linda Vista art colony; and painters Layla Edwards and Eric Jabloner.

The gallery also carries the works of French African painters from Burkina Faso, including Souleimane Barry, who makes abstracted human figures. Roesler did a show for the group when they came to Tucson for the Gem Show a few years back. The pandemic has prevented their return for now, but Roesler has had luck selling their work on online in Paris and elsewhere.

The internet and sites like Artsy and Esty have absolutely kept Gallery 2 Sun and other small galleries afloat.

"I sell a couple (of works) a month," she says, enough to keep the business going.

Early this year, she tried an experiment, reopening the gallery to visitors on Wednesdays and Fridays. But hardly anyone came.

"There was minimal traffic and then when the heat came it met with a dead stop," she said. Likely it didn't help that the road construction for the Downtown Links Project has been roaring past her space for months. She ended the effort in June.

Depending what the scary Delta variant does in the next few months, Roesler is entertaining the idea of staging an indoor-outdoor salon starting in October.

"Maybe on certain Saturdays and then various receptions every quarter," she says. "As weather permits, they will be outside as well as inside to mitigate germs."

A few doors down from Gallery

Sylvia Garland's "String Theory" is an acrylic abstraction in red, orange and yellow, the colors of dawn and a new day. Carolyn King's "Serenity" and "Restoration," part of a series mixed media nature works, picture curly plants—and human hands—softly putting the world to rights. Leslie Hawes's colored pencil drawings conjure up a much needed fairyland of flowers and waterfalls.

These optimistic pieces are the first artworks hanging in the gallery since it shut down a year and a half ago. The pandemic is raging once again, but the works are filled with hope for the future.

Michael and Neda Contreras were adamant from the early days of COVID that they would keep the gallery doors shut until an effective vaccine was widely available. A month ago, with excellent vaccines offered free for all U.S. residents from age 12 and up, the coast was clear and they threw open the doors on July 3.

So far they have not gotten a lot of people in the gallery and Michael suspects that the road construction is deterring some people from visiting. But "we're going to stay open regardless," he says. "We want to bring the people back."

In the meantime, to make sales, Michael is putting everything online, from his own handmade silver jewelry to Neda's charming ex voto paintings to each of the works in the Chicharra show. And he'll do the same for every exhibition in the future.

The title of the current show, Chicharra, promises better times. It's Spanish for "cicadas," and it evokes the insects' long years underground and their eventual emergence into the light.

Art Gallery and Workshop stages Agua Sagrada (Sacred Water): A Monsoon Exhibition. One of the show's duties, in my view, is to get the rains pouring down all over Tucson. This year was its best ever: the exhibition began in early July and by the end of the month the city had gotten 8 inches of rain, making it the wettest month in Tucson's recorded history.

And the 38 artists in the show have done their part, using paint and metal and pencil and cameras to create their visions of sacred water. Patrick Hynes painted a luminously blue waterfall on a tall and skinny metal screen. Chris Tanz photographed stately pelicans enjoying the waters of the Sea of Cortéz. Jana Welch used pencil on wood to depict a woman diving into the ocean. And Luis Rodriguez's print on canvas pictures a young boy in a bountiful Arizona river, one that's been carefully protected for this child and all Arizonans.

The show is entirely online because Raices has not yet opened up. "We had been thinking of opening but then the variant came out," says the gallery's John Salgado. Plus, he adds, "It's hard for people to get in and out" with all the ongoing road work.

At this point, he's hoping the variant will subside and he can open by November. For now, Raices will stick to the virtual gallery. As most gallerists know by now, "Online shows do well."