By Stephanie Morse and Cronkite News 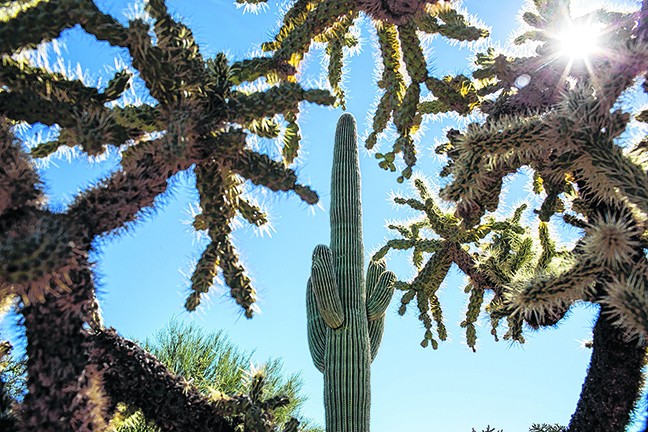 The click of container lids and swoosh of zippers filled the air on a still morning in Saguaro National Park East.

Orum, 71, and Ferguson, 74, have visited this spot for four decades. Their job is always the same: to monitor the health of more than 600 saguaros on 60 acres of the park. They're the third generation to measure and monitor these iconic symbols of the West since 1941, and the work has become a treasured ritual for them.

"It's sort of like having roots yourself to get back to the same place and repeat a process year after year," said Ferguson, a retired biologist dressed in jeans, a baseball cap, and a gray T-shirt decorated with green saguaros.

"The thing about saguaros is they're noticeable individuals," she said. "For most of us, plants are like, 'Oh they're all like other plants.' But saguaros are very much individuals, and that's something that our culture really relates to."

But since the 1990s, she and her husband have seen what could be troubling changes in their beloved saguaro flatlands.

Saguaros in the park, scientists say, are responding to climate change and prolonged drought by reproducing less frequently. This worrisome downtick could signal the state's saguaros are in decline.

Orum, a retired plant pathologist, remains cautiously optimistic. He believes another decade or so of scientific study is needed before scientists can be certain Arizona's iconic saguaros are declining.

He and Ferguson are a spry couple, fast hikers, efficient at inspecting the saguaros they love. Orum measured the smaller saguaros with a carpenter's ruler he carried in his khakis, and recorded data on taller saguaros with a 6-foot white plastic pipe he calls Charlotte. Ferguson, armed with a map on a clipboard, wrote down the new measurements on a notebook.

When they visit the park, they always hope to find young, new saguaros. If they do find one, they record its size and log its whereabouts with a compass, which they find more accurate than GPS.

They would drink a milkshake to celebrate finding the young saguaro. It's a 65-year tradition started by Stanley Alcron, who once monitored these same plots of saguaros.

But for Orum and Ferguson, there haven't been a lot of milkshakes recently.

From 1993 through 2016, Orum and Ferguson found only three new saguaros in the 60 acres they monitor in Saguaro National Park East. (There are two parts to Saguaro National Park. The eastern part was designated a national monument in 1933. An additional 25 square miles in the Tucson Mountains west of the city were added to the monument in 1961, and it was elevated to national park status in 1994.)

But a 2018 study found the problem of fewer young saguaros on both sides of the park.

Saguaro National Park biologist Don Swann and colleagues found only 70 saguaros younger than age 15 among the 10,000 saguaros surveyed in the park. The study names climate change, prolonged drought and human activity, such as cattle ranching, for the decline in young saguaros.

The results of the study are "broadly applicable to other desert areas for predicting how the saguaro and other long-lived desert species may respond to anticipated climate change," the authors wrote.

"Some of our biggest concern does have to do with the survival of the younger saguaros with higher temperature and longer dry periods being a potential for the future," Swann said.

Adult saguaros are well-adapted to dry conditions. Their shallow roots quickly absorb moisture from the soil and their flesh expands to store water.

But saguaros start out just a few inches tall and aren't able to store much water. Higher temperatures cause water to evaporate more quickly from the soil, which, coupled with drought, has made it hard for new saguaros to survive, scientists say.

Saguaros seem tough, but they're fragile. Their delicate white blossoms are pollinated by bats, insects and birds, producing fruits rich with tiny seeds. Coyotes and other animals eat the fruit, depositing the seeds in their scat. Most seeds are destroyed by drought, freezing conditions and animals. The few survivor seeds germinate beneath protective "nurse" trees and grow slowly—it can take 10 years for a saguaro to reach 1 inch. But once established, a saguaro can live 175 to 200 years, reach a height of 45 or more feet and weigh more than 2 tons.

Saguaros evolved only in the Sonoran Desert because it offers the two rainy seasons key to their survival. But the challenges posed by climate change and drought show that even a resilient desert species is vulnerable.

Arizona has experienced significant drought since 2000. A recent national study published in the Environmental Research Letters found Saguaro National Park has warmed about 1.2 degrees Celsius from 1950 to 2010.

"That's the equivalent of moving the park over 150 kilometers (nearly 100 miles) south from Tucson to hotter areas in Mexico," said Patrick Gonzalez, a climate scientist at the University of California, Berkeley. "Small increments of heating can translate into big changes on the ground."

This means changes in the saguaro population, which could harm many animals that rely on the cactus for food and shelter. The saguaro is a keystone species, essential to maintaining the delicate balance of the Sonoran Desert ecosystem.

"Species in a community evolve over long periods of time, and not all the species respond equally to those changes in climate," said Osvaldo Sala, founding director of the Global Drylands Center at Arizona State University. "They're all very tightly connected one to the other, so that can cause unexpected consequences."

Tom Orum and Nancy Ferguson have kept watch over the saguaros on the same 60 acres of the park for nearly 40 years.

Each year, they measure the height, note scars or damages and count the number of arms on each cactus. They also identify new or dead saguaros. Their painstaking, regular monitoring of saguaros has long informed scientific knowledge of the lifespan and population trends of the species.

And they have four favorites. They found these four in 1986, when the saguaros were about 4 years old and just a half-inch tall.

"We found them when they were so small," Orum said. "When you've followed them every year, you get attached to them."

Now the tallest is 11 feet tall. It grew 8 inches in the past year.

It would sadden the couple if the cacti were no longer there. They hinge their hopes for the species' well-being on rain.

"We think saguaros don't require just a single rainy season," Ferguson said. "They need rain one summer to get going. They need rain that winter to survive the winter. Then they probably also need a second rainy season to really get established."

In the drought-plagued 1940s and 1950s, Orum said, there was a similar decline in young saguaros. At the time, scientists weren't sure whether the drought caused fewer young saguaros or if hungry cattle also were to blame.

But during the especially rainy years of the 1980s, Orum and Ferguson found 30 to 40 new saguaros each year across their acres.

The current decline of young saguaros in the park is not tied to cattle, so scientists figure drought is to blame.

After Orum and Ferguson retired from the University of Arizona in 2000, their love for the desert and saguaros motivated them to keep up the monitoring they'd been doing during their time at the university.

"It's more important to us to be out here measuring cacti than figuring out how to invest our money, or lots of other things that people do with their time," Ferguson said.

Besides, their careful scientific observation of the saguaros is key to learning the fate of the cacti. Only monitoring will show whether saguaros decline or recover.