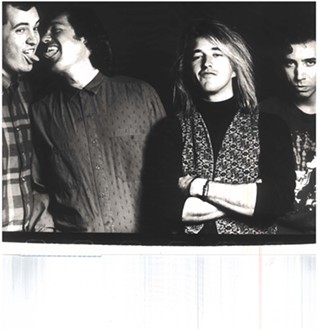 The show celebrates the halcyon days 30 years ago when the Sidewinders released Auntie Ramos’ Pool Hall, their second and last record on RCA’s Mammoth imprint. Then, they had reason to expect a world tour, at least a hundred thousand sales and international renown rivaling that of, maybe, Pearl Jam, who had opened for them on tour.

Congress’ capacious patio will likely fill up, drawing many of the same folks who turned out for two, full-house shows on successive nights last month at Phoenix’s trendy, 500-fan-capacity Crescent Ballroom. Tickets are $10 via Eventbrite.

For those catching up, the Sidewinders came together in the mid-1980s, led by David Slutes (now Hotel Congress’ entertainment director) and Rich Hopkins (founder, songwriter and commander of guitar fireworks for Tucson band Luminarios, which continues to tour in the United States and Europe).

In honor of their long-time fans, the band will perform the album note for note, beat for beat, precisely as it was recorded, likely including bonus tracks.

“We needed (musicians) who could come in, learn the stuff on their own and do it,” says Slutes. “Mendoza’s just beautiful that way. He’s done that for several years now. He’s the best at what he does.”

Musician Lisa Novak, Hopkins’ wife, has learned Padilla’s vocal parts and those of the band’s other vocal contributors over the years. She’s also taken over most rhythm guitar duties. Slutes says, “No one’s counting on me to be a great guitar player. (Now I can) just go off, break strings and do my thing.”

Their fan base continues to grow via online sales and fan referrals that span the globe. Slutes says he gets emails from fans flying in from Nashville, driving from Chicago and California. “They’re of a certain age and income. They can make plans around the internet. Mostly they get us. They were there. We are their band.” It was the Sidewinders and their fans, loving each other in secret and gifting them to friends.

Having come alive on the cusp of the music industry’s virtual atomization, the Sidewinders are lucky to be alive to tell the tale. Within the decade after they opened for Tom Petty, Napster was promoting itself at SXSW, and even Dolly Parton had lost her label. The music industry landscape was unrecognizable.

Looking at the costs of developing and promoting new talent, the majors began to seek more profitability by harvesting the finds of hip, local indie labels. Entirely predictably, the move ended countless careers. Like the mergers and acquisitions trend of that era, companies bought up out the competition and dissolved it in the integration.

What “everyone knows” is that the Sidewinders got screwed at the top of their game. The story goes that an entirely dismissable North Carolina cover band named Sidewinder obliged them to change their name.

The truth is more complicated and even more infuriating.

Per long-time Raleigh Observer music critic David Menconi, “Sidewinder formed in 1978 … and … built a huge following with covers of everything from AC/DC to the Supremes. The band was one of the biggest live draws in the country during the ’80s, playing 300 dates a year in 20 states and Canada.” They routinely packed dance halls with hundreds of people. They even appeared on Star Search.

Not incidentally, Mammoth was a North Carolina label, with headquarters in Raleigh’s next-door-neighbor town, Chapel Hill. Mammoth had to be aware of Sidewinder. RCA’s major label legal department perceived a threat and did its thing. Meanwhile Mammoth re-released a flurry of product: 1988’s Witch Doctor, again; a seven-inch, a couple compilations. They released Auntie Ramos’ Pool Hall in 1990. Its opening track, “We Don’t Do That Anymore,” stalled at #23.

Two years after the title track of their debut release, Witch Doctor, had grazed the U.S. Modern Rock Top 10 at No. 18, the Sidewinders were finally able to release new music. It was an EP of a track called “Goodbye,” recorded on a new label, Polydor, under the band’s new name, Sand Rubies. The same year, 1993, Polydor put out the Sand Rubies’ eponymous debut, and co-founder Rich Hopkins left the band. (Spoiler alert: He’s still in it.)

Meanwhile, according to Menconi, the Sidewinders of North Carolina played their last concert in 1992.

Two Tucson newspapers reported that on June 2, 2011, in a last-gasp show on the outdoor stage at The Hut, the Sidewinders announced they were playing their last show. Neither Slutes nor Hopkins remember that. Instead, they agree that were they ever to have broken up, it would have been from the stress and likely immaturity of the RCA Mammoth years.

Hopkins recalls the inevitable egotism, power struggles and hurt feelings. He thinks each of them had the sense that the other wasn’t doing as much for the band. Though neither mentions it, the mystique of “the lead singer” no doubt contributed to the friction. (Ask Keith Richards.) Hopkins has sole credit for six of Auntie Ramos’ 10 tracks, yet Slutes’ charisma often runs away with the show.

Such conflicts are both legendary and clichéd in rock bands, chockablock as they are with beautiful, charismatic and uniquely talented young strivers. But it might have been the actual fighting that put the Sidewinders over the edge.

Slutes recalls a time when he and Hopkins were literally falling down punching each other out in the recording studio. Legendary Neil Young producer David Briggs was there helping with some tracks. Slutes says Briggs stopped the donnybrook cold by calling a production meeting. They might fight like brothers, but the record came first.

You should come get bitten even if you’ve never heard the Sidewinders (of Tucson), AKA The Sand Rubies, as long as you love charming musicians and lyrics alongside jangly and gleaming guitars over an immovable beat. You should come out if the jukebox in your mind sometimes spins Soul Asylum, maybe The Blake Babies, possibly even Tom Petty and Neil Young, and above all, Arthur Lee-era Love, a favorite of Slutes and Hopkins.

The band may have lost the advantage of widespread initial reach, but it’s won the word-of-mouth game, and kept every fan it ever had.