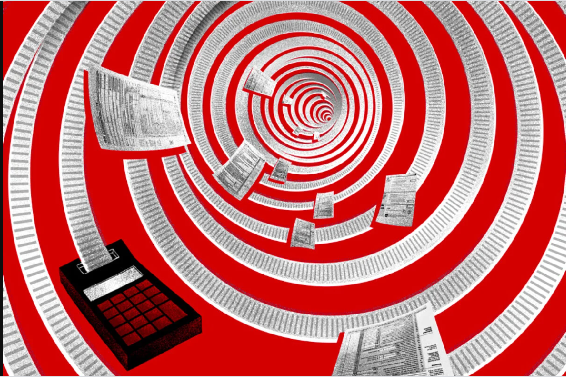 Supreme Court Justice Oliver Wendell Holmes Jr. was known as “The Great Dissenter.” (He was on the court 100 years ago, back when conservatives had integrity.)

In the 1927 case of Compania General De Tabacos De Filipinas v. Collector of Internal, Holmes (in a dissent, naturally) wrote “Taxes are what we pay for civilized society.”

This is the only verifiable version of that sentiment, although the phrases, “I like paying taxes. With them I buy civilization,” and “Taxes are the price we pay for civilization,” are also widely attributed to him. Many years earlier, his dad, Oliver Wendell Holmes Sr., a physician and a poet, had said, “I hate paying taxes. But I love the civilization they give me.”

It seems the vast majority of Americans would agree with that. There will always be the outliers — the vulgar rich, the Cliven Bundys, and those who can’t imagine doing something for somebody else. But for most of us, paying taxes is what we do. It’s patriotic and it’s American.

But now it’s an evil boogeyman, a monster created by Democrats to ruin our country. To hear Ted Cruz (and Arizona’s own “Ted Cruz,” Blake Masters) tell it, 87,000 armed government thugs are coming after every mom-and-pop business, after which they will come for mom and pop. It is a really stupid political stance to take, but in these bizarre days, stupid is as MAGA does.

For decades, the Republicans in Congress have been trying to starve the IRS of oxygen. They cut the budget and refused to allow for staffing to even stay at 2010 levels. Not surprisingly, this has kept the IRS from keeping up with new technology and has harmed the agency in numerous ways in the public’s eyes. Have you tried to get somebody from the IRS on the phone? Because of severe understaffing, it’s basically impossible.

And how about the service part of the IRS? My son is an engineer, but he’s not married and doesn’t own a house. When he gets his W-2, he files his basic return online and he’s done. That’s in early February. Then, he has to wait until August for his tax refund. That shouldn’t happen. Theoretically, with a large enough computer system, the transaction should take seconds, not months.

The Republicans like it this way. It allows them to disparage a government entity and, more importantly for them, it allows their fattest cats to escape their responsibility as Americans. Thus has it always been, but perhaps no more.

This has Republicans reacting like they had slid down a bannister full of razor blades into a giant vat of vinegar. And it has given birth to the latest Big Lie.

Here’s how Ted and Blake and all the others are lying:

• There will not be 87,000 new IRS agents, as often claimed. That’s a made-up number, one that sounds ominous. In a report by the U.S. Treasury, the $80 billion infusion into the agency would allow for the hiring of more than 86,000 new employees over the next 10 years. They would do so in annual increments of between 7,000 and 12,000 per year. Hardly an onslaught. While some of the new hires would conduct audits of those earning more than $400,000 a year, most would work on improving informational technology and enhancing customer service.

• Speaker of the House wannabe Kevin McCarthy lied through all eight sides of his mouth when he said the 87,000 armed IRS agents would be coming after people who make less than $75,000 a year. The IRA has already set a threshold of $400,000 and they intend to stick to it. The IRS has lost nearly half of the individuals who conduct complex tax audits. The number of those highly skilled individuals is basically at the same level as it was at the end of World War II, when America had one-third as many citizens as it does today.

• As for the armed part, the IRS does, indeed, have a small staff of armed agents. They must undergo a six-month training period and they only deal with people who have already been determined to have committed a tax-related crime. And it’s not as though the IRS guys are the only ones with guns. Several other government agencies have armed agents on their staffs. The Food and Drug Administration has armed agents. “That ground beef was only 79, not 80. Stick ‘em up!”

• Many claim that it is a waste of money. However, the IRS estimates that for every extra dollar spent on enforcement, it brings in an additional $5. Many economists believe that there would be no budget deficits if people would simply pay the taxes that they owe.

When it comes down to it, the question I ask myself is, would I be willing to pay slightly higher taxes if it meant that the likes of Donald Trump and other tax cheats would have to pay…taxes?