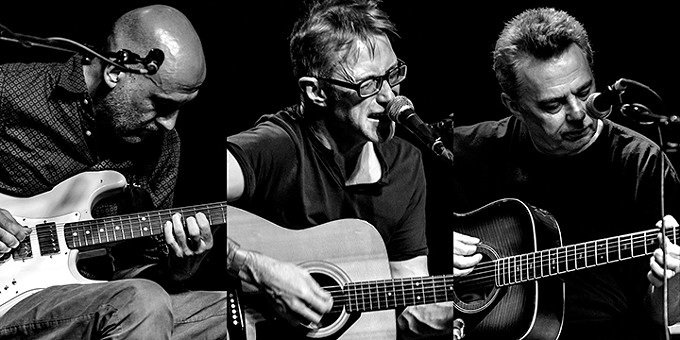 The members of Scottish indie pop band the Trashcan Sinatras could never have imagined when they formed in 1986 that they'd still be kicking it 32 years later. They certainly could never have dreamed, from their Irvine, Scotland homes, that in 2018 they'd be spread over two countries (Scotland and the USA) and two states (California and Washington). But here they are.

Bassist Frank Reader lives in Los Angeles, having married a Californian a decade ago. He's living a life of palm trees and year-round temperate sun that seems light years away from his childhood in Scotland.

"John [Douglas, guitar] was a couple of years older than me," Reader says. "He seemed really old. Paul [Livingston, guitar] was a couple of years younger, and I'm I sure I seemed old to him. He seemed young to me. The idea of 30 years back then wasn't something any of us thought about. We went one album at a time. We still do, actually. Just one bunch of songs. Songs propel us, so when we've got a song or two that have to be finished, we never feel that we're quite finished."

The band has released six albums in their three decades, which isn't hugely prolific, but the quality makes up for the meagre quantity. The most recent was 2016's Wild Pendulum, and Reader isn't sure when the next one will arrive. He says that, while the music industry has changed beyond all recognition since the Trashcan Sinatras started, it's still hellishly expensive to record an album and do it well.

"We need string players, getting a good producer—we've got three or four songwriters in the band so it's handy to have someone who's got that skill of being in the moment with the music but also seeing the bigger picture," Reader says. "That's a real skill that producers have if you pick a good one, and we got a great one last time—Mike Mogis from Bright Eyes. He's fabulous. We spent a lot of money making it, and we're a little cottage industry."

Wild Pendulum was, in fact, funded using a pledge campaign, something that left Reader feeling a little uncomfortable.

"All that stuff is such a fucking drag," he says. "I like being involved with the fans and meeting them, but making a record on the basis of upfront payment just seems really upside down. Maybe I'm just old school. I mean, I don't even know if the record's going to be made until it's made. I really don't. So to be making things on a promise doesn't sit well with me. So I don't know what's going to happen. We're writing a few songs, and a couple of them are pretty good. Maybe an EP or something. Who knows."

Funding aside, the band also has to deal with the obvious geography-based logistical issues. Recording an album, or really planning anything at all, when separated by thousands of miles presents its challenges. That said, we're living in a modern world.

"We're certainly not Skyping and Facetiming, but we are emailing a lot," Reader says. "It suits our working methods of old anyway. Although we used to be able to sit in a room and play together, and I do miss that, we still always had a trough of ideas that everybody was aware of and fed into. That hasn't changed. We can continue to contribute ideas to Dropbox. Pop in and get them. We're still working on old song and ideas from 20 years ago. Those things hang around too. Nothing seems to have changed that much."

For now, the band is touring the States performing the first two albums—1990's Cake and 1993's I've Seen Everything—in their entirety. Reader says that the idea came out of an innate desire to work.

"The three of us went out last October, playing acoustic round America, and we had a really great time," he says. "It was a pleasure to do it. No drama, less things to go wrong. All that stuff just adds up to pressure. Especially for me—I'm not the most relaxed person on the road. It was a real joy, and the three of us wanted to do it again with the albums. I think there are people who would like to have seen us do it with a full band, but it's just not feasible."

He might not be the most relaxed guy on tour, but Reader does like exploring the many nooks and crannies that America has to offer. He struggles with the thousands of miles between each nook and cranny.

"We're doing a tour in the UK in July, which for the U.S.-based people is a scoot," he says. "30 miles between gigs and all that. The way things are in America right now, you start to get a warped idea. Meeting people is always the best thing about it, and getting some sort of validation for these songs existing. The idea that they actually exist and it means something to people. The older we get, the more that matters. People have stories, and I find myself welling up when I'm listening to them. I must be getting old and sentimental or something. It's just meeting the people, as they come."

Reader is looking forward to this week's Tucson show, though he's not a big fan of the sun in Arizona. Famed Scottish comedian Billy Connolly once said that Scottish people aren't even white, they start off a sort of pale blue and need weeks of sun to turn white. That said, he's excited to play the Hotel Congress,

"I'm looking forward to this one—I hear the venue is a traditional old hotel, a bit of a landmark in the town," he says. "A lot of these things make a big difference—seeing an interesting situation, what people have done with it. Rather than turning up in these square black painted boxes with heavy metal bouncers letting you in. We're trying to find more interesting places to play. It's hard."

With the band performing those first two albums, the set list is pretty much nailed down, although Reader says that they might squeeze a few covers in.

"Whether they'll surprise anybody or not, we'll have to see," he says.