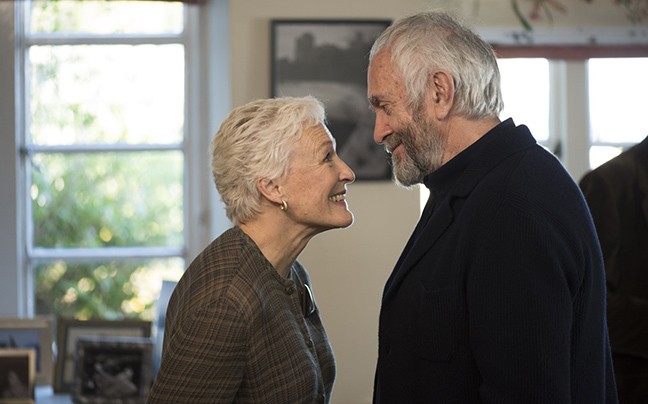 The Wife is one of those OK movies that strikes me as something that would've worked better as a play. I enjoyed it on some levels, and I think some of the performances are quite good, especially Glenn Close as the title character.

Other performances come off as if they are being played for an audience on a stage rather than on camera. I've read that members of the cast rehearsed for weeks before cameras rolled. The Wife displays proof that sometimes you can be a little too polished and consequently come off as too melodramatic for a movie.

That melodrama could play well for an off-Broadway play, but for a movie like this? A little too forced.

Close plays Joan Castleman, wife of newly christened Nobel Prize for Literature winner Joe Castleman (Jonathan Pryce or, as I like to call him, Sam Lowry). The first evidence of what kind of golden work Close will do in this movie is presented during an early moment where she picks up a phone to listen in as her husband is informed of his prize. Close does an expression that is a master class in how to act with your face for a camera. It's breathtaking.

I was able to accept his performance by pretending he was doing it somewhere in Manhattan for a live audience. It just worked better for me that way. Obviously, we are not supposed to play those sort of games when watching a movie. The movie needs to flow as a cohesive piece, and Irons sometimes takes you right out of the film, to the point where you feel like this is not a movie, it's a teleplay.

And then there is Close, and her daughter Annie Starke playing a younger version of her character, just killing it with their every scene, so much so that you have to dismiss the bad stuff and just enjoy the greatness you are seeing. The two actresses help to sell a story that is more symbolic than anything, an age-old tale about repression and insincerity. It's been told before (this movie shares some DNA with Barton Fink), and it's been told in better overall fashion before, but Close and Starke make it quite electric at times, all the same.

Pryce is equally good as the alternately polite and selfish author battling with major personality flaws that make him a somewhat lousy husband and father. Credit goes to this gifted actor for making Joe both a total ass and somebody you can't help but feel a little sorry for, all at the same time.

As an investigative author hounding the Castlemans, the one and only Christian Slater (Kuffs!) makes his best cinematic impression in many years. His role is as cliché as a role can get, but he makes Nathaniel Bone compellingly persuasive and nasty.

There are some very good cinematic moments constructed by director Bjorn Runge that put The Wife over the top. One of the final shots of Close, with Stockholm snow outside the window behind her, is a stunner. And her final shot, well that's a keeper for sure.

Moments like those, and some of these performances, help to sort of cancel out the moments that are stagey or a bit too farfetched. The Wife is very much worth seeing for Close, Pryce and Starke. They make you wish they'd take this story to the stage where it probably belongs.